"It seemed to her suddenly that violence was an inescapable factor of the heart, perhaps the most important factor of all--an ineradicable thing that lay, like a bad seed, behind kindness, behind compassion, behind the embrace of love itself. Sometimes it lay deeply hidden, sometimes it lay close to the surface; but always it was there, ready to appear, under the right conditions, in all its irrational dreadfulness." 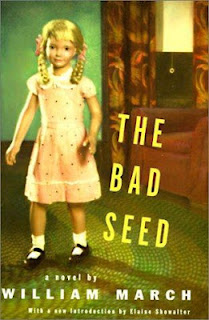 There are a number of ideas running through this little suspense novel. Far more than you'd expect from what was intended to be a 1950s pulp paperback. Much has been discussed about March's treatment of the serial killer, from his accurate portrayal of a sociopath to the less than likely notion that such pathologies are hereditary. Yet, as Elaine Showalter rightfully states in her introduction to the 1997 Ecco edition, "Contemporary readers may sense that the tale of Rhoda Penmark is more complex than it first appeared." Amid the important sociopathological elements in the novel and its unusual little killer, there exists an acute rendering of the state of contemporary (1954) society.

The notion of a "bad seed" is not just the seed that carried the killer instinct across generations, but a seed that lies dormant within the confines of western society, and that sprouts more and more frequently as the society maintains its unhealthy repressive lifestyle. Societal repression exists throughout the novel, from "larval" homosexuality to the almost disturbing sexual aggression portrayed in Leroy Jessup's internal monologues. However, the prominent form of repression is displayed through Christine Penmark, the beautiful and loyal housewife mother to Rhoda. Christine is portrayed as a woman average in intelligence, not particularly talented, and though loyal to the ideology of the family unit, highly frail and insecure so that the unit is lacking a stable foundation. Her hard-working and apparently loving husband is out of the country conducting business that will further both his career and the family's status, while Christine remains at home discovering the awful truth about her daughter while writing letters to her husband begging him to hurry home. Letters that shew will never send. There is an irony that exists in the notion of family unity since while Christine strives to maintain the impression of family, her husband Kenneth is entirely absent while daughter Rhoda has no concept of anything beyond self. Of course Kenneth is away not out of choice as it is made clear the trio had to leave their previous community due to Rhoda, and father had then to re-establish himself in a new line of work.

Yet the notion of family doesn't quite exist anywhere in The Bad Seed. Characters include a trio of spinster sisters, a divorced and childless feminist ball-buster living with her latent homosexual brother, a crime-obsessed possibly gay single middle-aged male, and loads of widows. We see family in the Daigles and in the Jessups. The Daigle family is represented as frail and becomes victim to Rhoda's intentions early on. The Jessup clan is internally destructive and self-defacing, with the children playing in dirt, Mrs. Jessup constantly (and understandably) undermining her husband, while Leroy is obsessed with aggressive sexual longings for Christine, and a sinister relationship with the little girl Rhoda that is described as a kind of courtship. The Jessup family too will fall victim to Rhoda.

Moreover, characters are seduced by the trendy forms of Freudian psychoanalysis in order to better understand and master (or restrict) themselves. Repression is not only of the self but of one's surrounding influences. As seen through the concerned and loyal friend, yet nonetheless selfish Monica Breedlove, people do their best to control their environment. With her influence Mrs. Breedlove can command those around (or beneath) her. Crime writers organize and catalog crime, schools control their enrollment, families do their best to control their children, as Mrs. Daigle does with the weak-willed Claude. Finally, according to March, we are also controlled by ancestry as Rhoda's evil nature isn't to be helped, but is rather inherited from her grandmother. This last point is the novel's most contentious and most difficult for the contemporary reader to swallow.

Otherwise, the portrayals are quite astute. March handles his material well, with excellent consistent characterization, great internal monologues and a strong plot that unites its little elements throughout the novel. In addition, written with the intention of being a "potboiler" (Showalter's word), the writing is clear and straightforward, generating an intense level of suspense.

William March's own publisher refused to publish the book, and it was picked up by Rinehart instead. The novel became an unexpected best-seller, March's most successful work both financially and critically. It received a 1955 nomination for fiction from The National Book Award. Unfortunately March did not live long enough to reap any of these benefits, having died only a month after the book's initial publication.

I highly recommend the book for both mystery (and horror, though the violence is thankfully limited), and literary readers. It works on many levels. Elaine Showalter's brief introduction adds to an understanding of the author (whom I knew nothing about), and helps to raise one's curiosity both of March and his other novels. Evidently March was an eccentric, sexually repressed himself and a believer in psychoanalysis. Moreover he believed in graphology, analyzing personality through one's handwriting, and according to Showalter likely named her heroines Penmark in association with this belief.