[NOTE. This blog entry was flagged for its content, for malware. I believe it was the link to the Bête Noire website which appears to have been compromised. I have removed the link and hopefully all will be well.]
[NOTE 2. I've re-read the article and noticed I made a comment that could be implied as rude towards the editor of Bête Noire #3. I apologize for this and have re-written the sentence to remove the implication.] 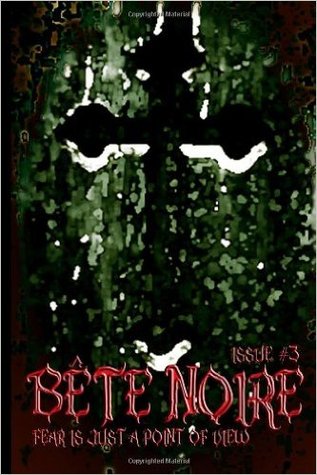 The third issue of Bête Noire features seven short stories, along with visual art and poetry. For the visuals we have the photo "Forgotten Key," by Vince Darcangelo, the illustration "Skull Star," by Denny E. Marshall, and the cover design by co-editor A. W. Gifford. For poetry we have "Obscured," by Rhanda Parrish, "James Town," by Marge Simon and Michael Roderick Fosburg, "Elegy," by Krikor N. Hohannesian, and "Shadow People," by Richard H. Fay.

The stories are all half-decent, with no single standout and nothing terrible. Some of the stories could have been improved with some additional editing, and while the unfortunate typos can be distracting, the grammatical errors are downright embarrassing.

In what is seemingly the near future, humans are co-existing with an arachnid-like alien through a seemingly beneficial arrangement. This story is so short that a longer description would give too much away. Short is all this piece needs; a neat yet simple concept that works nicely. I wonder what the story could have been if told through the third person. We would have a little more distance and emphasis would like on the darker side of the presented reality, rather than the current lightness of tone. Moreover, this first person narrator is oddly presented at times, since the narrator describes a room sees on a daily basis. I can't imagine walking into my office and describing it's appearance; I'd naturally be taking it for granted. If there is a specific audience, the narrator would be detailing more about the situation, since much is only hinted at. A small point though some attention would improve the story; it is nonetheless entertaining.

A mother is awoken by her daughter who claims there are sounds in the walls keeping her from sleeping. An effective little piece with a good ending is unfortunately marred by problematic prose and poor grammar. The opening sentence, "Susan's dreams crumbled away from her like sand turning to mud in the wake of an ocean wave," is nonsensical. The process of sand turning to mud has no relation to the act of crumbling, but instead is a form of dissolution. Many sentences are similarly over-written, and such a brief piece should be building tension which is better accomplished through brief and direct statements. "Susan awoke in the middle of the night" is a better option. "Susan awoke in the middle of the night. There was someone in her room." And so forth. Moreover, there are too many clunky details that also prevent mounting tension, with every "she said" accompanied by an action or a thought or a detail of some kind. Quick dialogue in the context of the plot would better serve the story.

"[H]er skin wrinkled with worry, like old paper." I didn't think old paper could worry itself to wrinkling. Aside from some grammatically ambiguous sentences, or where the subject fails to meet its predicate, are elementary tense switches. The story opens in the past tense and an early paragraph is suddenly in the present. Lastly, the story title along the top of each page is printed in plural: "Charlie's Houses."

Truly unfortunate as the story has potential, and I genuinely like the ending for reason I cannot discuss since it would spoil the work.

In a library book Buck finds a dollar on which is written "Lucky Dollar." From then on Buck receives all kinds of luck, but not the kind one would hope to have. (Reminds me of a great story I read years back, "The" by Name and Name.) A quick and amusing piece, with a neat title as it is an alternate way of saying "lucky dollar."

A crime noir private investigator piece, with our tough-talking hero Lasky being jerked around through a scenario in which he is clueless. Entertaining with some genuinely good lines, it is more parody as our hero lacks the brains of the likes of Sam Spade, seems never to get the girl, nor does he profit financially, which is what many of his noir counterparts rely on. Far less of a parody, however, than Robert Coover's excellent 2010 novel Noir.

Farmer Otis is alone at his farm where he is determined to have a final stand against the locusts that are swarming his property. In fact, locusts are swarming several states, and neither farmer nor government can defeat them. (While the U.S. states are slowly being devoured, we never learn of the rest of the world, so I suppose here in Canada we are safe. A good consequence in a U.S.-centric story.)

Overall a good read, but there do lie a number of problems. Farmer Otis comes across less sympathetic than intended, but I couldn't always take him seriously. There are problems in logic as well: Since the locusts infested every interior, covering the insides of the barn and the truck's engine, how come there isn't a single insect in the house? Not a one. How could he sit in that house without a single locust? Instead of fleeing to the city, the entire city should take refuge in that house. Moreover, the locusts have eaten all the crops, so why are they still there? Normally they move over in search of more food, but these guys just hang around, and more even join the clan, despite the fact that is nothing left for them to eat. Why doesn't farmer Otis just wait it out in the house where he is safe, until the locusts just collapse from starvation.

Finally, some of the story is over-written, and that opening paragraph is not necessary. A better opening sentence would have been one taken from the second paragraph: "The Agriculture Department promised that the infestation would dissipate in a week or so." Now there's mystery for ya.

Despite the issues I had with the story, I nonetheless enjoyed the thing, and the author certainly did well in presenting these locusts as a threat.

Fantasy told through the point of a huntress appointed by God to deliver fallen angels. The story is told via a conversation between our huntress Luna, and a minor angel and archer Ayil, a figure Luna has feelings for. These kinds of stories are really not my thing, but this one was well written, the necessary information well handled and delivered, so my interest was kept.

A young couple visit a funhouse, the husband overly excited while the wife reticent, even fearful. As we expect, some kind of horror in the hall of mirrors will ensue. From the co-editor of Bête Noire, the story is fairly standard, though while we do expect the worse, we don't necessarily see the form in which it comes. Unfortunately, the numerous typos make for clunky reading.

Posted by Casual Debris at 10:44 PM No comments:


In four years four Donald Westlake novelettes featuring Detective Abraham Levine of Brooklyn's Forty-third Precint were published in Alfred Hitchcock's Mystery Magazine (1959-62). Only two other stories were later published: one for Mike Shayne Mystery Magazine in 1965, and the final Levine story in the collection Levine (Tor, 1993). Abraham Levine is an aging, neurotic detective, overly conscious of his mortality.

In "The Sound of Murder," while obsessing over his heart rate and struggling with quitting smoking, Levine investigates a murder based solely on hearsay. The precinct is visited by nine year-old Amy Thornbridge Walker, who claims her mother murdered her stepfather, and likely many years ago killed her father as well. The girl believes her mother generated some great sound that gave her step-father a heart attack, and though the story appears weak and phone calls to coroners indicate there is nothing to indicate any foul play, Levine and partner Crawley feel there might be something to the story. They receive permission to investigate for two days only, and there is little at this point they can do but research Amy's reliability. This develops the story's plot and makes for an interesting procedural.

Yet while the investigation is interesting, it is Levine's response to the scenario, as he is obsessing with his own weakened heart and impending death, that makes this piece a strong read. The denouement is genuinely tragic and helps to illustrate that Levine's down-beaten view of life stems directly from his work and the cases he investigates. Levine is very much a victim of the urban landscape and its skewed morality, of the tragedies engendered by people, and the tragedy of this investigation is quite extreme.