For the previous episode, "Whap," please visit this page.
For the next episode, "Ka-Blam," please click here.

[There are spoilers in this review.]


Episode two of Harper's Island opens the morning after episode one closes, and lasts one entire day. The pacing in episode two is better than in its predecessor, but that's primarily the result of less preamble: we've met the characters, the situation has been set up, and we can now sit back and watch events unfold. And watch stereotypes get killed. Episode two presents us with a healthy body count: one kindly priest, two young women, two deer and maybe even a little dog. The dog's fate isn't clear, but it's possible he'll be found wandering the island half starved. Or transformed into a wild man-eating mongrel. 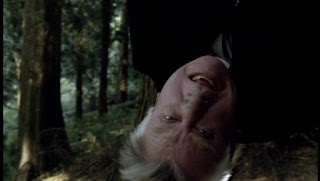 Only one of the deaths in episode two is surprising, but it's necessary in leading heroine Abby Mills to the conclusion that something on this island is afoot. We find that goth chick and John Wakefield-obsessed Kelly Seaver (Anna Mae Wills) has hung herself, but we are smarter than television characters and know that she's been murdered. Abby doesn't believe for an instant that Kelly would kill herself, especially since earlier that day Abby agreed to let her live with her, albeit temporarily, in Los Angeles, sending Kelly into absolute euphoria. Plus she's into this new guy, Henry Dunn's brother J.D. Abby is level-headed and has a good sense of character, so we'd expect Kelly's death to propel her to investigate the recent disappearances and odd island occurrences, like that deer head that appeared in Trish and Henry's bathtub. 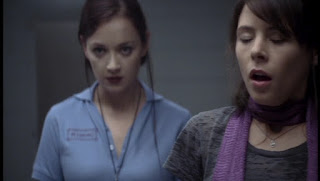 The other deaths are just for show. Reverend Fain (veteran character actor Terence Kelly) has no real part in the plot and the girl with the little dog had victim emblazoned on her character at the outset. Other old college friends will surely follow down that same path, or at least I hope. I must admit that it's unclear whether everyone will be wiped out, as with Agatha Christie's own island adventure And Then There Were None, or if a small handful will be be spared. This unknowing is to the show's advantage, since it makes us wonder whether so-and-so will survive the massacre. Any random slasher movie will have all but the heroine and perhaps, though rarely, her boyfriend/brother/best male friend survive, but while Harper's Island is following slasher conventions, it also follows Gossip Girl conventions (though thankfully without that pitiful narration). We are promised at least one death per episode, and while a walk-on like Reverend Fain might steal that role, I doubt the writers would stoop to such a cheat since it will disappoint fans while also slow the show's mounting momentum. 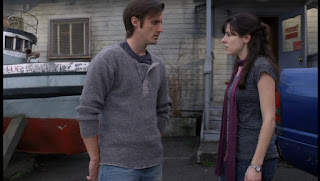 This first full day on the island has exciting activities for the guests with a scavenger hunt. While it actually isn't exciting at all, it is potentially a good idea for the writers to both play around with character groupings and keeping people separated. Unfortunately there is little interest in the hunt itself, the humour about it being lame is itself lame, and the writers can't seem to multi-task. Cal getting lost and strung up is an ok addition, but the viewer pretty much knows that he isn't at risk since, for one thing it would be too obvious, and for another there likely won't be two similar deaths in the series, let alone during a single episode.

There is, however, a new twist is introduced and along with a new character, Hunter Jennings (Calgary native Victor Webster from Mutant X and many other television projects). Jennings is Trish's old ex who has apparently returned to reclaim her. Teen television element and traditional soap opera melodrama is blatantly fused with slasher plot as Trish must evaluate her love for Henry, since it's obvious that Jennings still has her steaming. You can't get more blatant than with a name like Hunter. 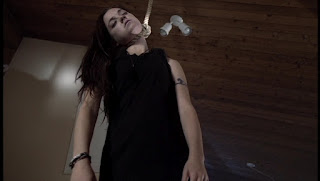 Finally, there's a nice touch with the fire pit scene at the end, since the leather gloved killer is seen striking a match against a matchbox from the Candlewick Inn, where Jennings is staying.But wait, that's where everyone is staying, isn't it? 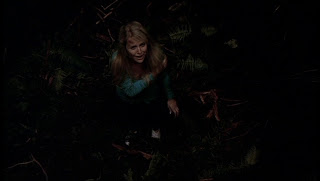 And I still have no clue as to who the killer might be. Right now I'm honestly too interested in watching these stereotypes getting killed, which to me is the ultimate purpose of the series.