Posted by Casual Debris at 2:56 AM No comments:

Unique and relatively unknown author John Keefauver deserves a greater audience. I have attempted to collect bibliographical data. For any additional publications or to correct any data, please comment or email at casual.debiris@gmail.com. 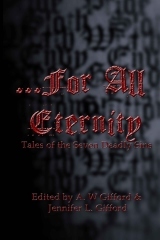 [NOTE. This blog post has been flagged for inappropriate content, specifically for malware. I believe this was the result of the link to the Bête Noire/For All Eternity website, which appears to have been corrupted. I have now removed that link and hopefully as is now well. January 2023]


Publishers of Bête Noir Magazine released their second anthology last year, a small seventy-eight-pager featuring seven stories, each representing one of the cardinal sins. The concept has been put to use for the anthology in the past, and I even recall a popular US magazine contest many years ago employing the theme for a vast monetary reward and selected a gluttony tale as its winner. For All Eternity generally relies on genre tales, fantasy with elements of horror, to tell of situations featuring each sin. A good quick read overall, there were two stories I simply did not like, though I was pleased to see that the book did not discriminate and included a non-genre story which is among my favourites.

Speaking of ineffective similes... "Lecherous" deals with a gay man telling of an online hookup incident that has cured him of seeking hookups online. Unfortunately there are no surprises and little of interest in this piece. Admittedly, however, I've gained respect for its author via the brief candid author profile at the story's end.

Posted by Casual Debris at 10:35 PM No comments: