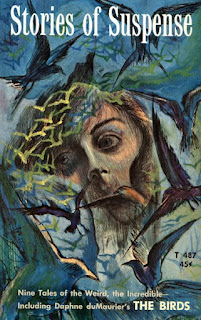 Stories of Suspense at Goodreads
Overall Rating:     8/10
A highly enjoyable little anthology, including many stories I've read in my early reading days, and two that are entirely new to me. The two highlights are the classic stories by Daphne du Maurier and Daniel Keyes, both of which I (and many readers), have re-read numerous times; these continue to hold up nicely, and if possible, improve with age. (Of course it's my understanding and appreciation  that continue to evolve.) Aside from Jack Finney's "Contents of the Dead Man's Pockets," (which felt dated to me even when I read it as kid back in the late 1980s), all the stories are readable, even the predictable ones.
Predictability in these stories is also a form of evolution: at the time they were published, they would have been surprising to the general public, as these are among the first stories to fool around with its central ideas (whereas today the likes of cannibalism is fairly common). Even many of the twists in these stories have been re-produced by later authors (such as the narrator being the intended victim--surprise, surprise!). and have become familiar twists to the general reader. If someone were today to write one of these, the story would be deemed obvious and needless, but reading the original stories that propelled these ideas, from cannibals and cheating gourmets to murderous animals and potentially murdering perfectionists, there is much fun to be had. The fact that it is packaged for a younger audience is quite appropriate, since younger readers can discover these story elements via older tales, rather than to stumble upon them when older and the ideas familiar, and the classic stories be dismissed as contrived drivel.
The attractive cover, obviously a depiction of "The Birds," is by Irv Docktor.
The Birds by Daphne du Maurier.     10/10
Good Housekeeping, October 1952; The Apple Tree: A Short Novel and Some Stories, London: Gollancz, 1952. (ISFdb)

An absolutely unique novella that does not rely on a twist, and its morbid effect resonates with the reader long after the final paragraph has been read. War veteran Nat Hocken has removed himself, along with his wife and daughter, to a small English seaside town. There he works as a general handyman for a farmer and lives a quiet life. As winter looms and the weather is shifting, he notices that the birds in the area are behaving strangely, and witnesses a large cloud of birds he is certain are preparing for an attack. A highly suspenseful and apocalyptic story. Many believe the story, first published in 1952, is a response to the effects of WWII, the lasting trauma experienced by returning soldiers, and the nation's inability to properly protect the country, as portrayed in the latter stages of the story. Some believe the protagonist's occupation as retired military and general handyman is more to indicate that he has the ability to survive and to protect his family during such a sinister situation. Yet the two interpretations do not cancel each other out, but rather complement each other quite well.
The original collection in which the story first appeared, The Apple Tree and Other Stories, is overall quite good (with the exception of "Monte Verità," that in my opinion is dull and unnecessarily overlong), and worthy of reading. It was re-published under various titles, including The Birds and Other Stories, following the release and success of Alfred Hitchcock's superb 1963 movie. In fact, from 1963 onwards, the story was re-printed in various anthologies, including this one, perhaps as an attempt to capitalize on the film's success.

Of Missing Persons by Jack Finney     7/10
Good Housekeeping, March 1955.
An average, unambitious bank teller visits the Acme Travel Bureau, where he hopes to purchase a ticket to the utopian land of Verna, where people have no worries and contribute to society via their own individual passions. While the protagonist desires to live in such a place, and faces the chance of going there, he begins to question the existence of this paradise.
For a slightly more detailed review of this highly entertaining story, please visit this page.
Midnight Blue by John Collier     8/10
The New Yorker, 22 January 1938

Mr. Spiers arrives home in the middle of the night, cleans himself and his clothes thoroughly, and goes down to the kitchen for breakfast, where Mrs. Spiers and their two youngest children greet him. The details of the night seem vague, but Mrs. Spiel's odd dream sheds light on something sinister that may have occurred.
An unusual little tale of murder, with a dash of the supernatural. Collier does well in building suspense, then introducing a natural family environment, with wonderful dialogue, to bring the story to its final reveal.

Flowers for Algernon by Daniel Keyes     10/10
Magazine of Fantasy and Science Fiction, April 1959
A young, mentally challenged man by the name of Charlie is subject to an experiment that expects to make him hyper intelligent. Prior to running the experiment on Charlie, scientists test it on a mouse named Algernon, and they can witness the experiment's effects on Algernon before the developments appear in Charlie.
There is not much more to say about "Flowers for Algernon," but to read it. It has been anthologized voluminously for good reason, and required reading in many high schools (as it was in mine). A genuinely touching story, even following many years and many re-reads.
"Flowers for Algernon" is currently ranked at the top of the ISFdb Top Short Fiction list with a user rating of 9.79/10.

Taste by Roald Dahl     7/10
The New Yorker, 8 December 1951
"There were six of us to dinner that night at Mike Schofield's house in London."
Our Dahlian observer-narrator is invited to dine with friends, a couple and their daughter, while famous gourmet Richard Pratt, is also attending. Pratt and the host share an annual wager, that the gourmet cannot guess the wine that the host is serving. The standard reward is a case of that particular wine. This evening, however, as a Dahlian observer-narrator is accustomed to experience, something unusual occurs as Pratt ups the ante: if he should fail to guess the wine, he will give his host his house, whereas if he were successful in his guess, he would obtain the host's daughter's hand in marriage.
My memory of this story is when my grade six English teacher, Mrs. Barbara Wise, whose readings to our class are engraved in my mind, read this to us. Since then I've been able to recall the story vividly, but until coming across it in this little book, and despite reading a few of Dahl's collections, was not aware that he was its author. A highly enjoyable story, even without the nostalgic element--it is well written, languishing in suspense, until that final twist comes along.
Two Bottles of Relish by Lord Dunsany     7/10
Time & Tide, 12 November 1932
A salesman for Numm Nummo acquires a roommate, a recent graduate from Oxford, in order to both share rent, and so he can learn the mannerisms of the gentleman in an attempt to increase his sales and be allowed to push the more difficult items. For now, he is selling primarily relish. The new roommate is obsessively intelligent, and when a crime in a small nearby town occurs, a murder with no body to be found, the salesman challenges the Oxford man to solve the case, and becomes his legs in the investigation.
A charming read with an expected twist.
Charles by Shirley Jackson     7/10
Mademoiselle, July 1948
A mother is concerned about her son's first weeks at kindergarten, as the boy returns home each afternoon with stories of the naughty things a classmate named Charles has been up to at school. Not among Jackson's best stories, as it is a little dated and predictable, but nonetheless written with great skill and some nice dark humour.
Contents of the Dead Man's Pockets by Jack Finney     6/10
Collier's, 26 October 1956 (ISFdb)
While his pretty wife goes to the movies by herself, a young and highly ambitious New York businessman stays in their apartment in order to finish a proposal that can lead to a promotion. The draft copy of that proposal is carried by a breeze out the window, which leads the man to get trapped on his ledge, eleven stories up, on a windy night. While there, he contemplates his life, imagining what would be found in his pockets if he were to plummet to his death.
Even as a kid I felt the story to be dated and a little simplistic. It's popularity, especially as directed to  young readers, is the simple message in the story. Carpe Diem!
The Perfectionist by Margaret St. Clair     7/10
Mystery Book Magazine, May 1946 (ISFdb)
Down-on-his-luck city dweller Charles is invited by his sweet Aunt Muriel to live with her out in the country. He readily agrees, and soon makes a life for himself on her land, making friends in town and even meeting a nice girl. Meanwhile, Aunt Muriel obsessively occupies herself with her drawing, but is quite the perfectionist. Every model she uses must be incredibly still, or she gets quite frustrated. The apples are kept in the fridge until they are brown, the tree is chopped down and brought in to get out of the wind. And with each subject done, Aunt Muriel looks for something more complicated.

Another predictable story, but a fine read nonetheless. While Charles is certainly a freeloader, he is genuinely helpful to his elderly aunt, and so we do come to sympathize with him. Aunt Muriel, on the other hand, is genuinely sweet from the get-go, which is a nice contrast to the story's macabre elements.
For more of this week's Wednesday's Short Stories, please visit Patti Abbott's blog.
Posted by Casual Debris at 10:39 PM 9 comments: