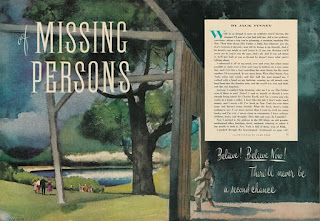 I read the short story, this time, in the anthology Suspense Stories (Mary E. MacEwen, editor. Scholastic Book Services, September 1963). I believe I first read the story (ca. 1990) in the excellent anthology Fantasy: The Literature of the Marvelous (Leo P. Kelly, ed. McGraw-Hill, 1974). The story was also included in Judith Merrill's annual S-F: The Year's Greatest Science-Fiction and Fantasy (NY: Dell, 1956).
Rating:     7/10
From a stranger in a bar, an average and unambitious bank teller learns of the Acme Travel Bureau. If selected by the bureau's staff, a visitor can purchase a ticket to a colonial paradise whose inhabitants have no worries, and their true passion, whatever it may be, is their contribution to society. The cost for such a ticket is whatever the visitor happens to have on their person. And the ticket is one way only.
"Of Missing Persons" is very much a product of its period, and the same type of story, of an escape from one's mundane existence and of the problems of the world, was all-too-common at the time. The concept was depicted famously in Rod Sterling's Twilight Zone screenplay, "A Stop at Willoughby," in which an average working stiff gets off the train from his daily commute at the town of Willoughby, where the townsfolk live in an era of the past, and can go fishing at their leisure. Finney himself specialized in stories and novels of escape, including the popular Time and Again (1970), and his most recognized short stories: "The Third Level" (1952) and "Of Missing Persons" (1955); in all three the protagonists find unusual methods of leaving present-day New York City for some kind of utopia, be it in the past with a lovely girl, or in some faraway place.
Cold War anxieties, post WWII trauma, nuclear threat and other worries of the period, alongside the protagonist's insignificance amid the large urban landscape, are highlighted as elements that lead these common men from wanting a more comfortable life. Our bank teller here has no ambitions of greatness, of bettering a world that is crumbling away, but rather to leave that world and all its inherent anxieties. The utopia in "Of Missing Persons" that Finney has created is a fairly simple planet named Verna. It is a true utopia, as nothing appears to mar its fantasy and there is no illusion that can be broken. The story culminates in an ending which essentially solidifies the idea that 1950s New York City is a world from which one is best off escaping. Our protagonist has mounting doubts of the truth of Verna, and these doubts leads him to abandon, at the last minute, his voyage. He is left, sitting in a bar, miserably recounting this adventure to anyone who would listen.
Along with a simplified utopia, Finney gives us a simplified explanation of speedy space travel, and stock characters in both the narrator and the alien travel agent. Despite these simplicities, the story closes with strong effect, as the overarching idea itself is well presented.
The technical strength of the story lies in its circular narrative. The story is a monologue aimed at the reader. We meet this stranger in a bar, who tells of meeting a stranger himself in a bar, heeding him to listen to his story. The narrative comes full circle, as the bank teller is warning us of our anticipated visit to the Acme Travel bureau, giving us the same warnings he received from the stranger he had some time ago met in a bar.
For more of this week's Wednesday's Short Stories, please visit Patricia Abbott's blog.
Posted by Casual Debris at 3:39 PM

A fine run-down. I picked up a copy of SUSPENSE STORIES when I was a bit older than its target demographic (probably in a library sale), but I wonder how many were introduced to it through that anthology.

Serling and Bradbury's, as well as Finney's, love of nostalgic past-yearning drama and prose probably didn't hurt the influence of any of them at mid-century.