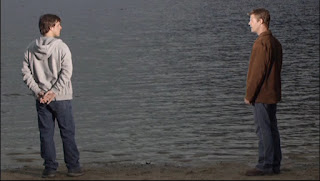 Like the previous episode, this one does not introduce us to any new returnees. Unlike the previous episode, however, this one works well. The major difference is the lack of a sub-plot, and the resulting focus on our regular cast of is tense and taut. Moreover, we receive an explanation for the abductions which is both surprising and interesting. A good hook for season two. 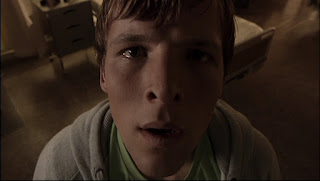 Amid the burgeoning story-lines we discover that Jordan Collier's investment in the returnees is less than humane. He is hoping to grow some of Lily's baby's chromosomes in a lab. We don't yet know why, but can assume (since we've seem it before) that he is hoping to harvest some of the returnees' special abilities. Do a little genetic engineering perhaps, possibly even inject himself with some baby chromosome. Interestingly enough, the baby somehow warns mommy that the apartment they originally wanted to rent was not good or safe enough. Good little helpful fetus. However, the apartment she Lily and Patrick do move into ends up being bombed, and the baby can't recognize that JC's gated community isn't safe, something that I, with my unlimited lack of special powers, can figure out from so many miles away. "That baby belongs with me!" JC shouts out. 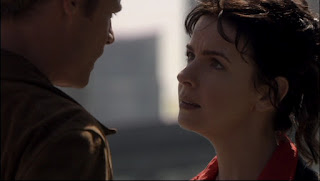 "White Light" takes leaps in the Tom Baldwin/Diane Skouris relationship. Here they are forced to trust each other, or at least Tom to trust Diane, and they prove to each other that they can work together, and that they're essentially on the same side. It's a progression that is sped up in relation to The X-Files, in the sense that trust between Mulder and Scully was slower to progress. There's an additional tie-in to that show in that the geeky technician falls for the lead female investigator.

Moreover, Diana's relationship with Maia is also highlighted. This is good in including Maia in the events of the final episode, since her role is fairly small, relegated to observations such as "Your son, Kyle. He's the answer," or allowing Diana to deliver a dose of television philosophy: "Normal people like me, they just wish they were special, like you." We certainly can't forget Maia since she was so integral to the series opening, and likely plays a major role later on. The best thing here, however, since her appearance in "White Light" is not terribly necessary, is that it is kept short and limited to the early part of the hour. 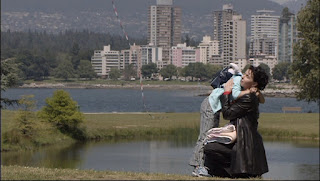 [A semi-spoiler on the abduction explanation.] Kyle turns out to be someone else in that he embodies a messenger who is supposed to reveal the great mystery of the 4400 to his dad Tom Baldwin. Now, we know that he never was abducted and couldn't be operated on so how did he nonetheless become this messenger? If the messenger spirit was so simply injected into him, why do these people need to be abducted for so many years? All stuff to think about, and I doubt we'll get an answer. Especially since so much of the abductions was geared toward the Mystery. This Mystery, which I won't reveal in detail here, is reminiscent of the excellent short-lived series, Odyssey 5. Both shows deal with the eventual end of the world, but of course The 4400 contains more fantastical elements, to the point that it is a science-fiction/fantasy crossover, whereas Odyssey 5 is strictly science fiction. Premises for both shows offer much potential.

There are, admittedly, a couple of weak moments, in particular how Skouris knocks down that hulking yet evidently dim-witted security officer. The joke's ok, McKenzie's delivery is great, but seriously... Overall well handled by director Tim Hunter, who has worked on numerous projects, from average 80s mainstream movies to a variety of television shows, including Mad Men, Nip/Tuck and that haunting episode of Carnivàle, "Babylon." 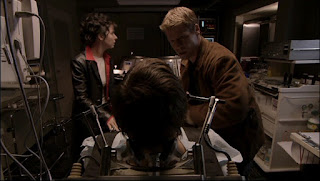 Posted by Casual Debris at 2:00 PM