My posts have been infrequent due to some life events, not because I've lost interest in posting.

I will be out of the country for two months, returning in mid-November.

I do have many posts in progress so it's not entirely unlikely that nothing will appear at all.

Internet access will be sporadic, and hence my replies to posts and to emails will be delayed.

Thank you all for visiting.
Posted by Casual Debris at 12:00 PM No comments:

Though the covers of the AHMM issues during the 1960s and 1970s were less than unremarkable, the interior drawings are a treat. I don't know who was responsible for these, but the artist's attention to detail, interesting facial interpretations and great quirkiness is an absolute treat, helping to enhance the overall issues and the individual stories themselves. As a kid in the mid-80s I would purchase these back issues for a quarter at a local second hand book store, and before even reading the issues I would sit and look at the art, at times trying to interpret what the stories were about.

Here is a rundown of most of the art in the July 1965 issue, which I reviewed a little while ago. 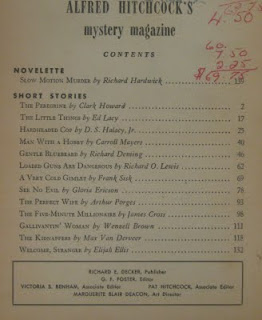 Bragging about paying only a quarter, some of the issues were unfortunately in poor condition, this one being among the worst since someone was unable to mentally calculate 60 + 7.50 + 2.25. But I guess those were big numbers back when this issue cost only fifty cents. (I cropped off the top of this image; though I loved the book shop as a kid, in hindsight I'm quite upset they ruined all their merchandise by ink stamping their store name and location on the first page.) 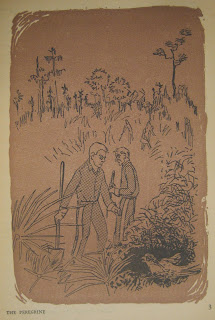 The first full-page artwork is for the lead-in story, "The Peregrine" by Clark Howard. This image, in all its ugly brown splendour, depicts our two convicts amid the thick brush as they discover the infant bird. The drawing below, from the bottom of page 11, depicts the unsympathetic prison guard as he sits behind the line that no prisoner shall cross, unless they wish to get shot point blank. (A third image I didn't include as it contains a spoiler.) 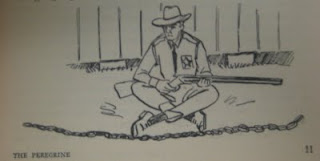 The title image for Ed Lacy's "The Little Things" (page 17) includes a hint as to why convict Harry Morris was killed. The murder is depicted on page 20, with an accurate rendering of the shooting, including the bullet's point of impact. Lovely. 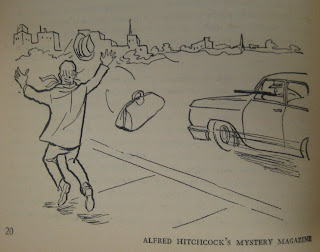 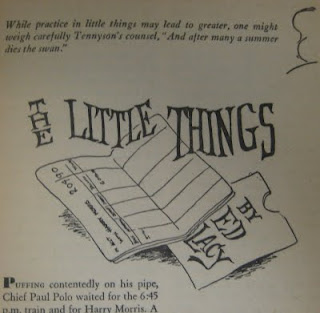 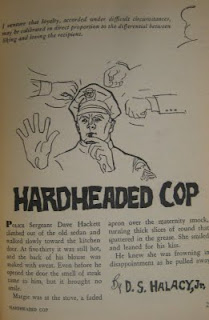 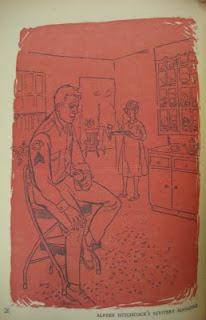 D. S. Halacy Jr.'s "Hardheaded Cop" receives the second full-page colour rendering, with our "hero" Police Sergeant Dave Hackett slumped in his kitchen chair, beer in hand, with his lovely wife being, well, a lovely wife, with Hackett's steaming dinner in hand. My feelings about the characters are made clear in my review, but I nonetheless like the detailed aspect of the drawing, the full-sized kitchen complete with dotted floors, mountains of dishes and... hey wait! Is that a kitchen window behind the cop? And is that a door leading to a dining room that clearly continues behind the wall. I see, the kitchen window gives a nice view of the dining room. Kind of like the set of a sitcom. (Incidentally, as a kid I thought the fists on the title page were punching the cop, but only later did it dawn on me that they are rapping his head, testing for firmness.) 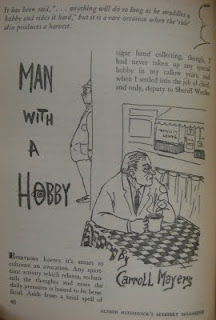 For Carroll Mayers's "Man with a Hobby" we have the man in question, local Sam Hubbard, immersed in his hobby of pursuing potential bad guys. Sam is a chubby, clumsy-looking fellow, less akin to a bounty hunter than one would imagine, while the potential thug is quite thug-like, staring at the Fidelity Loan Company across the street. I love the steaming cup of coffee, the diner tablecloth, red an white despite the black and white, and the two lines beside Sam's coat button, emphasizing his pudginess. 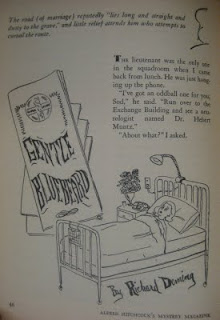 Richard Deming's highly enjoyable "Gentle Bluebeard" is positively enhanced by the charming drawings. While the full-page yellow garage meeting between Sergeant Sod Harris and mechanic Mosher seems an odd choice for such focus as there is nothing terribly integral to the moment, the various images of poor Arlene Mosher lounging in the hospital bed (pages 54 and 55) throughout her various misfortunes are sensitively detailed, and even charming. The story's title page is nicely rendered with the old hospital bed, it's little wheels and the medical chart hanging on its frame. The decision to place Deming's name underneath the bed is great. Perhaps it's just me, but I found a little humour in the layout of the three different hospitalization scenes. The beds are identical but the lamps are different as are her flowers. She's probably lying there wondering how she can possibly be such a klutz. Poor Arlene Mosher. 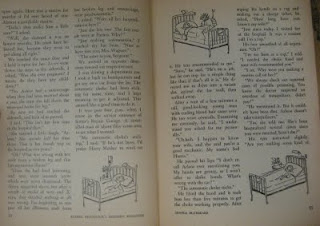 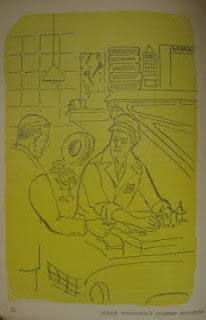 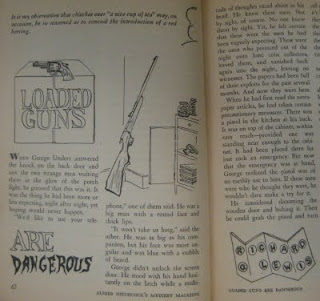 The disappointing "Loaded Guns Are Dangerous" by Richard O. Lewis has some amusing art. The author's name on the title page is not a series of bullet hole, but the dots help to represent George's valuable coin collection. Gullible Martha appears in all her fine, loud-mouthed glory, and the inset of one of the bad guys is great. 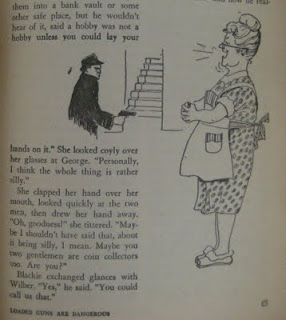 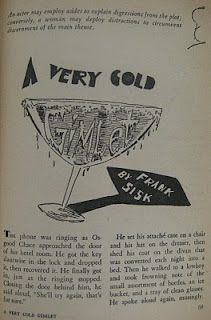 "A Very Cold Gimlet" features a very busy title. "A Very Cold" hovers over a nicely frosted glass filled with "Gimlet," while Frank Sisk's name sits in the glass's shadow. In the inset to the right we have the very cold, sharply drawn Janice Sanford, beside a friendly enough looking bit character. Janice appears icily laughing on the phone while our "hero" Osgood Chase is fuming beside her, each armed with a gimlet. While I like Janice's sharp curls, the tough guy look of Chase somehow doesn't match the man I had in mind. 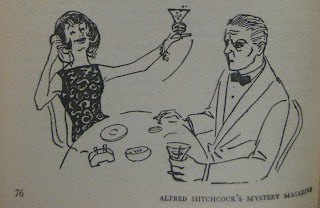 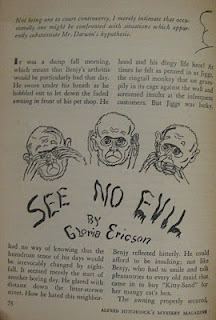 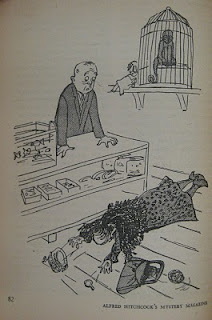 My favourite art for any story belongs to Gloria Ericson's "See No Evil." The monkey faces in the title page are more comical than creepy, while the lettering is a little juvenile, particularly the drooping "EVIL." On the other hand, the depiction of pet shop owner is excellent, as he looks partly like an ape, and somewhat like a mouse. His character is consistent in both images. On the right he is shocked at Miss Decker collapsing, while the monkey stares, appropriately with an excellent bird's eye view, his little doll leaning against his cage. We see Miss Decker's belongings scattered across the floor, including her cash and her house key. The image below, with the ape-like Benjy finding Miss Decker's loot, includes some amusing wall photos of her beloved dog, which is a great detail. 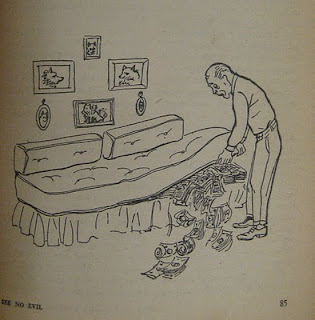 The title to Arthur Porges's "The Perfect Wife" is wonderful, as the somewhat comical story has a very comical rendering of the strangling of one of the "little old biddies" that our so-called hero dislikes so much. There is also a small inset of our dashing narrator which I do not include. This drawing is a small filler, adding little to anything, and not quite rendering the killer as I would expect to see him. 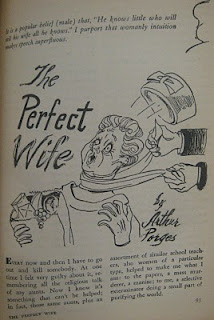 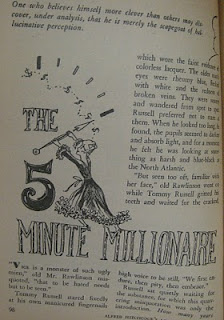 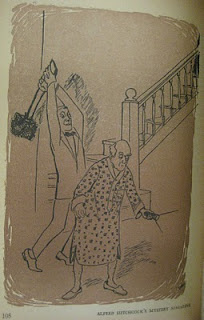 "The Five-Minute Millionaire" is granted one of the full-page colour images, this one in ugly brown, though a lighter brown than that used for "The Peregrine." The title page shows a woman pulling the minute hand of a clock (the author's name is in the facing page), while the full page depicts the murder. The title page seems a little messy, and it took me five minutes to figure out what the lady in the sheer gown was doing (looks almost like she's holding an umbrella). As for the title page I love the over-sized mallet thing, especially in contrast to the victim's tiny flashlight. I also like that the artist includes the victim's shadow, only it contradicts the tiny flashlight, giving the impression that the room is fully lit. 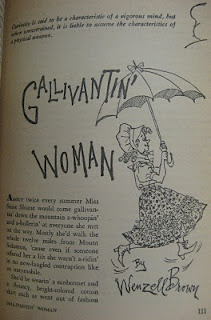 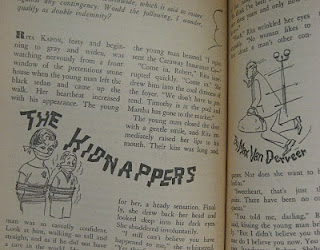 The title for "The Kidnappers" features trembling lettering alongside a trembling kidnapped boy and a calmer woman. The facing page has either criminal or payee with the loot bag rushing by a lamp post and over the author's name. The yellow page below has the gluttonous Mr. Kapon worrying over son Timothy while holding up the ransom note, while the seductress secretary is vying for the businessman's attentions. Details include a bundle of letters on Kapon's desk (his laptop must be in the drawer) and a pretty heart-shaped locket on the succubus, I mean secretary's right wrist. 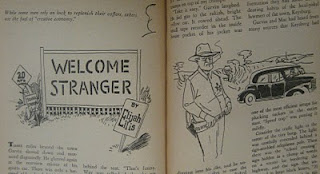 The double-paged title to "Welcome Stranger" is nicely detailed. The story's lettering is on a large highway billboard which has become the archetypical hiding place for a highway patrol car seeking speedsters, while Elijah Ellis's name appears in a small picket sign. We have our crooked sheriff lounging with his cigarette, while his intended victims are driving by. Look closely around the billboard and you'll notice some signs, like the 20 mph speed limit, details that are mentioned in the story. 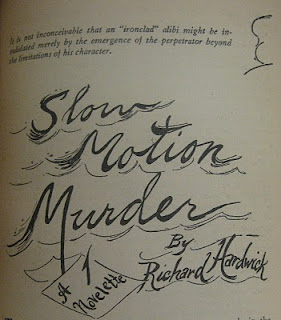 Finally, our novelette for the month, Richard Hardwick's "Slow Motion Murder," gives us a watery title and the final full-page colour illustration. The illustration, in a bold green, depicts the scene of the crime. This one too is nicely detailed. I suspect the illustrator read each of these stories, considered their potential and carefully selected each scene to depict. Moreover, s/he does a great job at illustrating the story titles, even though the lettering reminds me at times of my childhood attempts at drawing, back when I drew regularly under the misguided suspicion that I had such talents. 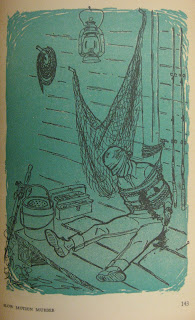 Posted by Casual Debris at 10:37 PM No comments: