Horacio Quiroga, The Decapitated Chicken and Other Stories

A collection was published with the same title during Quiroga's lifetime: La Gallina Degollada y Otros Cuentos, 1925. This is not a translation of that work, but a new collection of stories spanning Quiroga's career.

You can find synopses of each story at the Internet Book List. 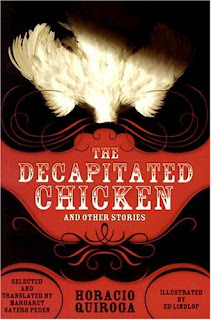 Uruguay author Horacio Quiroga’s fiction is tame compared to his tragic life. There are a number of differing variations between biographical sources, but since he led such an unusually active and tragic life, I felt it useful to piece together a brief and somewhat accurate account. (By "accurate" I mean I have omitted contradictory details.)

Born in 1878, Quiroga was just over two months old when his father, returning from a hunting trip, accidentally shot himself. The wound proved fatal and he died shortly thereafter. In 1901, the year that witnessed the publication of his first book, two of his brothers died of typhoid fever. Later that same year his best friend was preparing for a duel, and with the intention of helping him, Quiroga accidentally shot and killed him. He was arrested for the incident and imprisoned, but after investigators deemed the killing an accident, he was released and later exonerated. Quiroga married Ana Maria Cires, one of his teenage students, and they relocated to the jungle in 1908. The couple had two sons.

Quiroga’s insistence on making their life in the wild environment led his wife into a deep depression, and in an attempt to take her life she consumed arsenic. She was violently ill for several days and finally died a painful death. A few years later Quiroga fell in love with seventeen year-old Ana Maria Palacio, but his insistent pursuits only forced the girl’s parents to take her away. He then fell in love with another teenager, Maria Elena Bravo, who married him in 1927 when he was forty-nine. Quiroga returned to the jungle with his new wife and they soon had a daughter, Quiroga’s third child. Shortly thereafter the writer’s position with the state was revoked and, unhappy in the jungle, his wife fled from home, taking their child with her. After many years living with acute pains, Quiroga was eventually diagnosed with prostate cancer and hospitalized. There he discovered that a highly deformed patient was kept locked away in the hospital’s basement, and urged that the man, Vicent Batistessa, be released and allowed to stay with him in his room. Batistessa was grateful and proved faithful to his saviour, and helped him to locate and consume some poison to end his own life. (He used either arsenic or cyanide, depending on the source, though some cyanide compounds may contain arsenic.) Both of his sons, on separate occasions, later committed suicide as well. Quite the legacy. Amid all of this Quiroga worked many years as a state official, and produced a number of plays and short stories, as well as a few novels, mostly dealing with unrequited love. 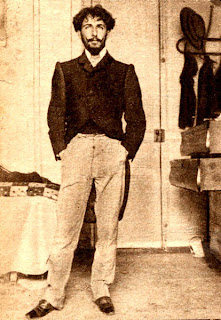 In this collection of Quiroga’s stories, we are presented with an introduction to his writing that spans his entire career. There are obvious similarities across the twenty-something years, but the latter works are generally more skilfully written, while some of the ideas in the earlier ones are more interesting. Many of the stories are simply flat, relying on standard shock endings (“The Feather Pillow” 1907), while some are so infused with filler that getting to the end is a bit of a dull chore (“A Slap in the Face” 1916). Other stories employ interesting ideas but are unfortunately not well rendered (“The Pursued” 1908). Too many of the stories are too alike, though this may be the result of story selection for this edition.

The only truly satisfying story in the collection is “Anaconda” (1921), a novelette about a jungle serpent community threatened by the presence of a human research facility. This story seems to amalgamate the positive elements of Quiroga’s literary phases, everything from a unique idea to solid prose and the strongest example of characterization his work has ever presented (ironically the characters are mostly snakes). Quiroga replaces his usual choppy prose with smoother, even writing, and his characters are more than caricatures, rendered with some fine light humour. There is a poignant message and the story hits is layered with various themes, a multiplicity that is wholly absent in most of his other works. “The Incense Tree Roof” (1922) almost manages this as well, but a strong idea and an interesting character are cast aside by an ending that is more deserving of his earlier stories. The comical and eccentric civil servant is a portrayal of Quiroga’s own disorganised behaviour while acting as Justice of the Peace. What is interesting about this piece is that Quiroga does well in delineating the civil servant protagonist, since his stories often resort to employing partially-formed or stock characters.

As I mentioned above, the translator and/or publishers may have preferred a certain style of Quiroga story, and it is possible that the preference for a certain style excluded other worthy(ier) tales. At least in his youth he was referred to as an experimenter. There is a wide gap in the chronology, between 1922 and 1935, a period from which no story is represented. It is possible the author was less productive in the form, focusing more on his novels. I have not been able to find a definitive bibliography of his short works, and may add an addendum to this review when I do.

According to the blurbs at the back of the 2004 edition, Quiroga has been compared to Poe and Kipling, a statement I find rather surprising. Not only does he lack Poe's inventive story-telling, character technique and attention to detail, his story endings are often incidental, tacked onto any random thought, on par with the tired "it was all a dream" convention. Furthermore, he does not have Kipling's devotion to character and interest in character relationships. Likely these blurbs helped to sell a few copies of the book, which is unfortunate and unfair to Quiroga as it likely raised certain expectations while delivering something obviously sub-par. This raising of expectations would result in disappointing readers. 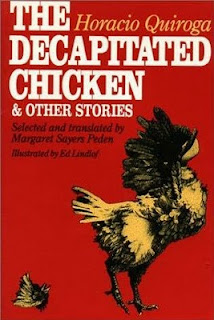 This volume is illustrated by Ed Lindlof, and though I liked the concept of the drawings I did not care for the art. Each story featured a full-page illustration, and the only one I found satisfying and appropriate to the spirit of the work is the haunting drawing for the semi-haunting "The Dacapitated Chicken" (Originally "La gallina degollada" 1909) . The cover of the 1976 edition features a yellow chicken over a blood-red background, with the bird's head lopped and lying in the opposite corner. Terry Gilliam's artwork comes to mind, and the effect is somewhat dated and comical. The art and design of the 2004 edition is quite effective. A clean white chicken torso is strung upside down, its head covered over by the elaborate title design. This image leaves more to the imagination, and the lettering is really quite nice.
Posted by Casual Debris at 8:49 PM 1 comment: