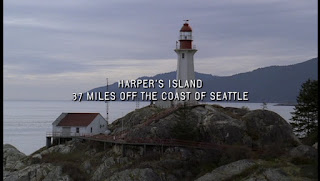 It was the premise that peaked my curiosity, otherwise I'd never heard of the series.

Harper's Island appears to be an attempt by CBS to emulate specialty network programming. With HBO, AMC and others delivering tense R-rated programming, shows normally short on episodes but high on body count, the once popular CBS has to compete. Unfortunately prime time television is not HBO, and the tameness of Harper's Island is immediately obvious. There is no nudity, swearing or originality, but there is surprisingly a fair amount of violence and more gore than you'd expect. There are attempts at bordering prime time limitations by showing women in skimpy underwear whenever possible). The dialogue is less than stellar though far from terrible, while the characters are incredibly generic and the actors good looking. There is much focus on relationships, familial and new, as well as elements returning from the past, along with teenage-level humour and so forth, so that the series comes off like what you would expect Gossip Girl to be if one or two characters were killed off each week (which wouldn't be a bad idea). Essentially a slasher Gossip Girl. 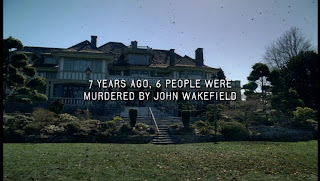 Despite the show's obvious faults I enjoyed the opener. It isn't high brow nor is it original, but somehow it manages to be fun. Filmed on Bowen Island in beautiful British Columbia, the scenery is lovely, the surroundings grey and wet. The cinematography is sometimes surprisingly good, though not always consistent (yet neither is the weather in BC), and unfortunately the editing is a bit scattered. There are tonnes of characters and situations, yet they're all well contained within this cozy setting. In fact the entire cornucopia of cliché that is Harper's Island is brought together well in this contained environment. A semi-secluded island, it's reminiscent of Agatha Chritie's master mystery And Then There Were None (or Ten Little Indians, among other less than politically correct titles). 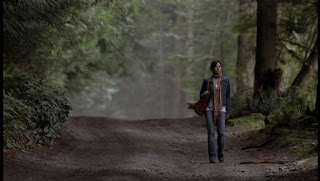 Briefly, the series follows a group of people gathered for a wedding on Harper's Island off the coast of Washington state. It's a week-long wedding between a former boat hand and a wealthy local. There are a variety of characters, all familiar, so tensions abound in many forms. Just like a traditional soap opera. Add to this mix the haunting element of the community's past: seven years ago John Wakefield killed six people on the island. Now, during this week of bliss, more bodies will be added to that death list, at least one a week we're promised, and property values will surely decline.

The fact that there are so many characters and such a diverse range of relationships tossed into this salad allows the writers to confuse the viewer and keeping the audience from guessing, at least at the onset. We're too busy trying to figure out who these people are, why they're there, and so forth. Some characters are clearly expendable wedding guests while others are so obviously suspicious that they cannot be guilty of the crimes. The first victim, cousin Ed, is knocked off quite early and quite horrifically that we're off to a good start. 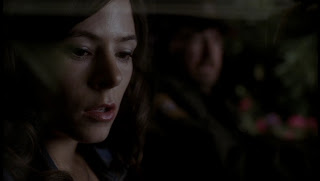 I won't discuss plot details and will assume you're reading this because you've watched it rather than because you're curious (IMDb is for the curious). I will, however, briefly discuss characters. Abby Mills (the lovely Elaine Cassidy) is the standard unattached, level-headed and intelligent protagonist. The Jamie Lee Curtis of Harper's Island. Abby is a former local and her mom was a victim of killer John Wakefield. I'm expecting her to figure things out early on. The groom is Henry Dunn (the excellent Odyssey 5's Christopher Gorham), former boat hand marrying island rich chick, an all-around nice guy and Abby's best friend. The bride is Trish Wellington (Katie Cassidy), rich over-protected girl. Then there's Henry's goth brother J.D. (Dean Chekvala) who looks nothing like Henry, the outsider nerdy stereotype proper comedic rich British guy Cal Vandeusen (Adam Campbell) and his slutty yet faithful girlfriend Chloe Carter (Cameron Richardson), Abby's sheriff father Charlie Mills (Jim Beaver), Trish's powerful daddy Thomas Wellington (Richard Burgi), and thousands of others. College friends, a girl with a yappy dog, the fat guy, the black guy, the mean guy, the womanizer, the girl's best friend, the former boyfriend... you name it, the stereotype's here.

And there's Uncle Morty (Harry Hamlin, you know, Perseus from the original Clash of the Titans). Hamlin is surprisingly good and properly mysterious. Everyone's friend (or uncle), a handsome bachelor womanizer who happens to be carrying a gun and loads of cash. I was genuinely surprised when he was knocked off at the end of episode one, and am curious if that bag filled with cash has an purpose in the plot. 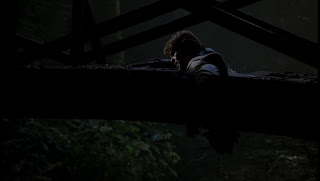 As for my predictions? I have absolutely none yet.

Posted by Casual Debris at 1:02 AM

Yes, great hopes were held out for this series...the cast alone was cause for some optimism...but, alas...

This was utter dreck. I don't know if you'll make it all the way through this series. I didn't. As the series progresses it makes less and less sense. I threw in the towel around espidoe three or four when one of the female characters was dispatched in a typically misogynistic and cruel manner and no one missed her. No one asked where she was, no one went looking for her. Not one person! I hate murder movies and slasher flicks where the characters cease to have any humanity and turn the into writer's puppets. It was all so contrived.

To satisfy my curiosity I went trolling the internet looking for discussion groups and fan sites to find out what others thought of this. I also was wondering if I was right about my guess as to the killer. Apart from the usual gorehounds who watch these movies to revel in bloodshed, brutal and cruel murder methods, most of the brief reviews and opinions I read were of the same consensus - utter disappointment. They pretty much hated the ending which included a moronic "twist" by introducing a ... Oops, better not spoil it. But I have to say I pegged the killer with ease. It was obvious who the writers had chosen from the get-go. The "twist" was only added to mess up the story and confuse the viewers when the cast dwindled to about three or four people.

Thank for the feedback John. I didn't want to read any comments in case someone spoiled it for me. I wanted to like the series but, as you suspected, it really fell apart. After episode 10 I decided to just watch the last three & review in a chunk, not to waste more time on this.

The show could have worked if it didn't take itself so seriously; there was something fun about watching a menagerie of stereotypes being knocked off. The illogical character actions & additional nonsense that was tossed in to confuse people was maddening; very little made sense & I couldn't suspend disbelief any longer. But I'll keep my venting for that final review.