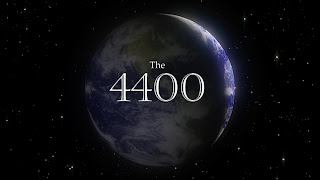 Over the last sixty years, people all over the world have been inexplicably disappearing. On a cloudy Washington day in 2004, a comet appears to be on a collision course with Earth. Missiles have no affect, and as people call their loved ones thinking it is the end, the comet slows down and a ball of light hovers over Mount Rainier, Washington. As the ball bursts into storm, it leaves behind a mass of smoke along with 4,400 people--those that have gone missing since 1946. 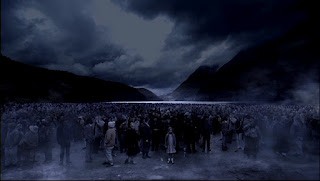 The Department of Homeland Security in Seattle takes charge of the large group to try and make sense of their disappearance, and to make sure they don't pose a threat to the rest of the world. As the pilot progresses, we follow the events surrounding five "returnees" and the two Homeland Security agents investigating them.

The 4400 offers up a premise with a myriad of possibilities. As the pilot focuses on character situations, it presents us with a potential promise of 4400 character-driven plot-lines, along-side those of the government investigators. Moreover, the pilot episode displays the additional limitless narrative potential in that the stories of some character can even overlap. The situations themselves are quite complex, and offer up the tragedies of lives broken by being placed in temporary long-term stasis. An additional element is introduced when we learn that the returnees have developed  supernatural abilities, each ability seemingly unique. Though the series aims to follow certain specific characters, nearly each episode should feature its own separate though linked story-line, so that though a linear series, it contains elements of the anthology. 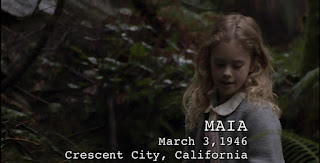 Maia Rutledge (Conchita Campbell) is an eight year-old girl who disappeared on a rainy day while picking flowers. The first of the abducted, she went missing back in 1946 while on a rained-out picnic with her folks. (Incidentally, they are seen sitting in a car listening to Ella Fitzgerald singing "Cheek to Cheek," a rendition she recorded ten years later in 1956.) Having returned fifty-eight years later, she has no family and no place to go. Maia appears to be precognizant, an ability which carries with it the power to creep people out. Because she is eight, and though she appears emotionally mature, she is not yet mature enough to know when not to reveal information. "That's where you'll be buried," she innocently tells a potential adopter. 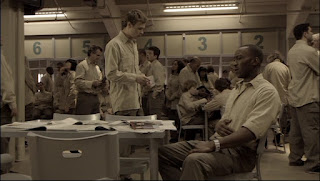 Shawn Farrell (Patrick John Flueger) disappeared only three years prior to "the present" in 2001. This essentially implies that he had a 2001 space odyssey. Shawn is a high school student who is forced to return to the difficulties of that age while being a notable outcast, or "freak." Complications are added when the then fourteen year-old hottie classmate girl next door Nikki (Brooke Nevin) is now seventeen and datable, yet she is dating Shawn's younger brother Danny (Kaj-Erik Eriken), who is now the same age as him. Moreover, he is also nephew to one of the investigating agents, and the only potential witness to the event that placed his cousin Kyle, the agent's only child, in a coma. Shawn's ability is revealed only partially, which adds to its creepy mystery. It is linked with life, whether giving life, reviving or possibly even taking it away.

Richard Tyler (Mahershala Ali) disappeared from South Korea in 1951, as he was being beaten by a group of white American soldiers for being involved with a pretty white girl named Lily. Richard is struggling to make a place for himself in a society that has become inter-racially diverse, and that has evidently seen greater sociological change, from people wearing exaggerated piercings to the fact that he can no longer smoke in public areas. Adding to the overall psychological stress, he returns to his home in Detroit only to discover that it's no longer there, replaced by an overarching highway which houses beneath it a group of aggressive homeless men. We don't yet know what Richard's talent is, though we assume he has one. 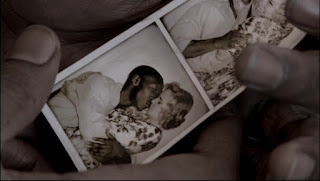 Lily Moore (Laura Allen) disappeared in 1993 when her daughter was only six months old. Her husband has re-married and their daughter believes the second wife is her biological mother. She no longer has a family nor a home. Lily is linked to Richard since she is the granddaughter of the Lily he was in love with back in 1951, and both are now homeless and friendless, finding companionship with each other. Lily's ability has also not been revealed, yet it is likely related to the fact that she is inexplicable pregnant. 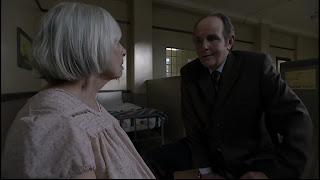 Finally, Orson Bailey (Michael Moriarty) is a successful Washington sales partner who disappeared in 1979. He has returned to see that the young boy he showed around the office has not only taken over, but is unwilling to take him back, complaining of hard times while living in abject luxury. Moreover, his wife Elizabeth with whom he had a thirty-two year anniversary dinner date the night he disappeared, is now living in a home for the aged. Bailey's ability is the unfortunate earthquake-like violence he generates whenever he is upset. And there is much to be upset about.

I found Bailey's story to be the most tragic, and even felt touched when he was attending to his sick, now elderly wife. The brief moment is sincerely touching, and it's possible that his wife has gone a little loopy due to having waited twenty-five years to be taken to that special dinner. Moreover, though I never cared for actor Michael Moriarty, I found his performance to be quite effective. Examining any of these plot-lines through the returnees point of view can be heart-breaking, but what differentiates Bailey from the others, making his situation most tragic, is that there is no positive, alleviating element. Richard and Lily have each other, Shawn has his family while Maia has her youth. Bailey must face his tragedies by himself. 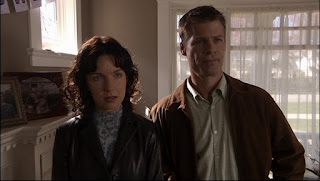 The weakest element of the pilot is the agent duo of Diana Skouris (Jacqueline McKenzie) and Tom Baldwin (Joel Gretsch). Originality between the two cops is attempted, as though the creators and writers were consciously avoiding a Mulder/Scully pairing, but it's unfortunately mixed in with too much cliché. It is the female agent who is the tough loner with father issues, while the male counterpart is the family-leaning romantic. Of course they first meet at odds, and their differences are brought to the fore quickly and obviously. There is some unfortunately bad writing, and I can only hope that the relationship, along with the dialogue between the two, improves. They are working with head Dennis Ryland (veteran character actor Peter Coyote), who played the standard hard-nosed leader in the pilot, and like his agents has a fair amount of potential, as witnessed during that moment on the lawn with Maia.

The pilot episode was co-written by series creators Scott Peters and René Echevarria. Echevarria wrote many teleplays for Star Trek: The Next Generation and Star Trek: Deep Space Nine, as well as Dark Angel (likely where the poor bantering was perfected). Peters on the hand, a Canadian, was behind numerous episodes of successful Canadian supernatural series, from Are you Afraid of the Dark?, Highlander, and the often above average The Outer Limits. 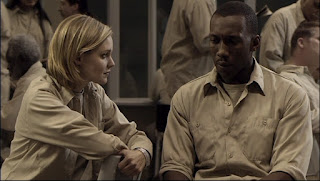 The series, like The X-Files and so many syndicated genre productions, was filmed in and around Vancouver, BC, so we can expect some faces from other such programmes, some well(over)used buildings and streets, as well as lots of rain as much of the series was filmed during the winter. The pilot did provide some nice cinematography along with television quality special effects.

Despite the show's weaker points, I am nonetheless curious as to how it will progress.

Note: Patti Allan appears briefly on television as parasite Barbara Yates, though will later be replaced by

Posted by Casual Debris at 2:23 AM