Written before his popular series of books featuring Inspector Alan Banks, Peter Robinson apparently returned to the manuscript of Caedmon's Song in order to get a break from Banks. This Bankless novel follows two sets of narratives, one concerning graduating university student Kirsten who is brutally attacked in a park in Bath, and the other focusing on mysterious woman Martha Browne who appears in the fishing community of Whitby in search of someone. The story of the attacker, a serial killer, is based on the horrible crimes of Peter Sutcliffe, The Yorkshire Ripper.

The novel is overall well written, with good, consistent prose and genuine sympathy toward the victims. It is however marred by a number of problems that drag the narrative considerably, mainly its uneven pacing, obvious direction and its unnecessary length.

The poor pacing is partly the result of the separate narratives. Though each of the forty-seven chapters is short, each narrative's plot progression must be kept aligned in order for the stories to move along evenly. Hence, when in the early stages we are learning about Kirsten and the attack, the Martha sequences often read as filler, as she sits in coffee shops wondering where to go next. Three quarters of the way through the novel, when the Martha sequences are becoming more involved, the Kirsten chapters slow down considerably. With much of the filler excised, the novel would have been far more effective, and due to its essentially predictable story-line, it would work more appropriately as a novella (an unfortunately under-appreciated literary form).

Moreover, the novel's mystery and the links between the two narratives become obvious early on, so that the required element of tension is never developed. When the two narratives become more and more closely intertwined and beginning to meet, the novel as a whole begins to drag, making for cumbersome reading as we approach the finish line. I found myself skipping sentences in order to finish the book, knowing full well how it will end; page 247 of my edition truly looked like a finish line I was hurrying to reach. 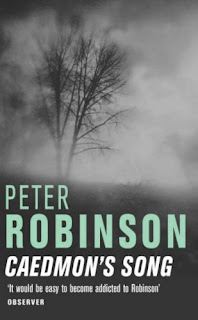 While the prose is overall even and solid, the sequences between Kirsten and psychiatrist Laura Henderson were poorly executed. Narrative and dialogue falter here, though this is partly because we're on such familiar territory. Unfortunately author Robinson, certainly talented, is unable to make from the ordinary something fresh.

Finally, the novel features, albeit briefly, a crime worse than even murder: "...and a few dated pop albums: Rolling Stones, Wham, U2, David Bowie, Kate Bush, Tom Waits." First of all, how can anyone refer to Tom Waits as a pop singer? Secondly, he is among the most innovative of artists, transcending notions of genre. Finally, lumping him the likes of Wham, the short-lived epitome of 1980s pop and bad hair for men, is just insulting.