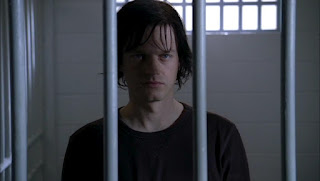 A fun-filled ride, this one. Three deaths, one major. Two more discovered bodies. The return of Shane. More secrets, and secrets kept from the viewer. All I can say for certain is that Harper's Island is best when it isn't trying to be funny or sentimental, and when there are no silly flashbacks.

This part of the series is that part of the conventional slasher scenario when, after a few deaths, the remaining characters need to separate to search for something/someone. Abby receives a call from Madison: "If anyone leaves the island... I'll die." I buy the entire Madison dilemma, since of course people will remain to keep her safe. There is some tension when a couple of guests do try to leave nonetheless, namely Sully and Beth.

J.D. is locked up in prison with the sheriff convinced of his guilt. Locking up a character half-way through a series is a definite sign that he's innocent. The writers have tried too hard to make J.D. appear guilty, so hard that I didn't buy it for a sec. I still want to know what all the blood washing was about, though. Did he really plant that deer head? 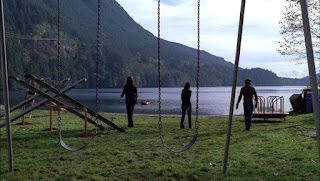 While in prison J.D. admits he's been hiding out with burn victim Cole Harkin (Dean Wray), so the good sheriff heads out there. Out there he meets up with Lucy's little dog, scraggly and wet, as well as a home-made javelin of sorts that punctures his leg. Well, it turns out that both Cole and J.D. have been searching for Wakefield or the Wakefield copycat. This is odd since who could've known that the murderer would resurface on the island. Even Sheriff Mills told Abby he'd never suspect such a thing. Yet Cole says he's returned several weeks ago. "It seems Abby coming home has set this thing off." Did he return because he knew Abby was coming (though Abby herself in the pilot said she didn't know if she'd make it), so came out early suspecting the killer would also arrive? None of this is made clear.

Turns out Cole has the journal that Wakefield kept while in prison and gives it to the sheriff. Charlie reads it with utter surprise, and keeps the information to himself. I never care for the tactic of withholding information from the viewer. For one thing the characters are a step ahead, which kind of breaks the illusion that we're out there with them. Breaking that illusion lessens the tension. 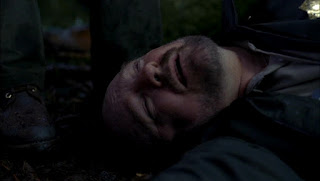 Cole is soon killed with a few well-aimed arrows and the cabin is set aflame. Lucy's little dog is once again facing fire, and once again there's no indication if he's survived or not. The sheriff's okay since Abby and Jimmy come by in the nick of time. I guess we'll never learn why Cole set that dog on Trish and her dad.

So who could've fired those arrows? I still think Jimmy's the killer but he couldn't have fired them as he was with Abby, or so we think. It's odd too that Shane disappeared here, since he was only going to tell Abby and Jimmy where the sheriff was if they'd set him free and take him along. I guess they must've opted for the first, and Shane will pop up later to annoy us some more.

While Sheriff Mills is with Cole the lights go off in the prison, a shot is fired and the guard is killed. J.D. reaches the keys and frees himself. I admit this scene was surprising, and I suppose the killer kills the guard so J.D. can escape and he can then kill J.D. (However, since he's got a gun he can also just wander in and execute all three. Now that would've been doubly surprising.) The killer does get to J.D. and now the writers want us to think Henry is the killer, or maybe even Abby, and of course neither are. Jimmy left Abby and easily could've killed J.D., and of course the dying man decides to spout some gibberish, "It's about you," rather than utter the brief name, "Jimmy."

Aside from these three deaths there are some grizzly discoveries. Malcolm's skull is found in the incinerator, though of they don't know it's him. Richard is discovered harpooned to a tree in a beautifully visual scene. Others are still missing, such as Lucy and Cousin Ben. 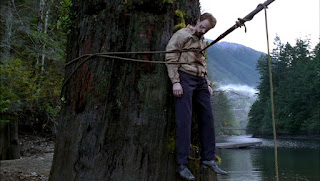 I count fifteen remaining potential victims. Sure Abby is involved somehow, and I predict she might be Wakefield's child rather than Charlie's since the dead man had some kind of relationship with her mom. I continue suspecting Jimmy, and his motive is certainly linked to Abby. Could Jimmy also be a Wakefield relation? If the killer ends up being someone like Maggie, that bartender Nikki or the island doctor , I'll be utterly disappointed. In fact, I'm surprised Maggie isn't dead yet. My back-up suspect is Sully, but I have no reason for that.

Posted by Casual Debris at 7:58 PM