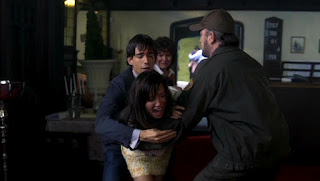 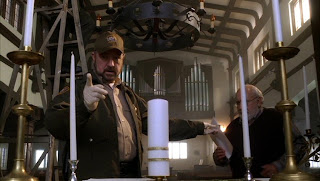 As expected, following the public execution of Thomas Wellington at the end of episode five, the remaining guests are now aware that a killer is on the loose. Or if not fully aware, at least suspecting. Sheriff Charlie Mills shows why he's a good cop by essentially challenging horror movie conventions: "I recommend you all stay together." Yet daughter Abby doesn't listen, being a rebel I suppose, doing traditional rebel daughter things like wandering around the island, sneaking into daddy's house, following suspicious boys and exhuming long-buried corpses.


The more the finger is being pointed at J.D. the less likely he's the killer, and the more I am beginning to sympathize with him. He actually managed to show some feeling toward Kelly: "I liked her." What a romantic. He's perpetually being persecuted, and even his brother good boy Henry is no help, accusing him of every possible misdemeanor. Again I'm hoping Henry is the killer, but for now my prime suspect is still Jimmy, who doesn't even  have the decency tp appear in this episode. Is he left out so we don't actively suspect him? There's also something quietly suspicious about best man Sully Sullivan, but that might just be because he doesn't quite fall into either of the show's character categories: overly suspicious or expendable wedding guest. 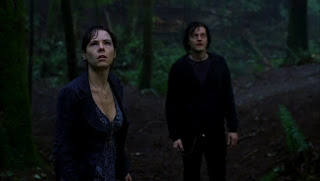 A few things are tied up along the way. Marty's body is discovered and we learn that someone is indeed buried in Wakefield's grave. Meantime another complication is built upon as Abby shows Henry and J.D. her dad's shrine to Wakefield and the files that reveal Wakefield might still be alive, or that there is a copycat on the loose. I liked seeing Abby, Henry and J.D. as an investigating trio, but the grouping doesn't last long as perpetual victim J.D. continues to face prejudices and is temporarily locked inside a kitchen pantry. I was half expecting someone to kill him through that skylight. 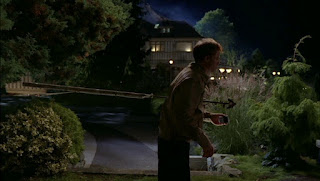 Episode six features a single victim in Wellington's son-in-law Richard Allen (Vancouver native David Lewis), who is bloodily harpooned in a great sequence, while his daughter Madison looks on from a window. Or does she? One of the better deaths so far. Richard is a good choice for victim for a few reasons. First of all his disappearance after having been outed as an unfaithful husband makes sense and others won't immediately suspect he's dead. Secondly, the audience won't be exposed to more melodrama concerning his sinful actions. Here the show would risk being less thriller and more soap opera.

And speaking of opera, those odd calls Abby is receiving, with "Ave Maria" playing over the cell, is okay but not terribly threatening. Anyone feel threatened by a Catholic prayer transformed into an operatic aria? Maybe Abby is more into country music.

Finally, the moments of suspense are intersliced by the comedic pair of Cal and Chloe. In this episode, the frolicking attractive young couple have just returned from sailing, when Brit boy Cal realizes someone found the engagement ring he'd recently lost. Adventuress fiancée-to-be Chloe makes a scene to retrieve. Not great comedy, particularly since they've put an end to a long-term relationship, but the true consequences of these escapades is to interrupt an otherwise suspenseful episode with mild television-level comedics. Not quite worth it. In fact, so distracting I'm hoping they'll become victims soon, or freak me out by being the killers-at-large.

I'm posting this final image to remark that I am quite impressed with the props for the show. Detailed stuff. I also liked the canned tomatoes and vegetables in the pantry, and took it as a warning not to dine at the Candlewick Inn. 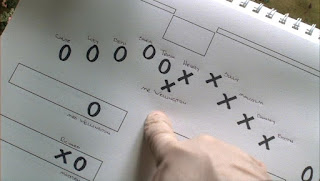