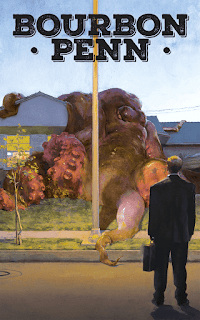 It's been a couple years now that I've been reading Bourbon Penn. As with most primarily online periodicals, I tend to read a story or two, and move on. Consistently impressed with the quality of the stories in BP, I've been meaning to read through an entire issue, and I managed (nearly) to pour through their latest issue, Bourbon Penn 20, in two days. (I write "nearly" since the last story followed a two-day hiatus.)

Yet read through the issue I certainly did. Half a dozen stories and none of them bad. Each with a dose of suspense injected into its own unique universe, mostly dark. Though I enjoyed each story, I do have a favourite: Mark Pantoja's "The Replacement," which struck its emotional cord at a hefty pitch.

The cover art is by John Brosio, titled "Fatigue (Version 2)." It is accompanied by a good personal essay on his experiences studying art.


Smilers by Chris Hauser     7/10
Six year-old Aiden wants to go to the pool and hit the high dive, but his big brother Zack can't tear himself away from a zombie shoot-'em-up. Meanwhile dad has been in the kitchen for several days, reading the same paper. A very good and surprisingly sad apocalyptic world, where the setting takes back seat in the mind of a six year-old in a wolf mask who wants nothing more but to spend time with his big brother.(Aidan & Zack, from A to Z... interesting.)

The nature of the apocalypse is not the point of this story, but it is nicely conveyed to the reader. This can be challenging when seeing the world through a six year-old's eyes. Good descriptions, good detail, and a good ending make for a memorable story.


Crescendo by Chelsea Hanna Cohen     7/10
Selena speaks in numbers, while Charlotte speaks in music. Quickly they fall in love, and everything runs smoothly until they meet Mark, who also speaks in numbers. Immediately, he and Selena are able to speak and understand each other at a rate Charlotte can only wish to achieve. The story presents the idea that how we get along is on par with how effectively we communicate, and then challenges that idea. Another well written story with realistic characters in real scenarios, regardless of their methods of communication. A nice example of how fantasy can convey concrete emotions.


The Replacement by Mark Pantoja     8/10
A young boy has returned home following a long illness. He remembers little of his pre-illness days, and is concerned that his mother appears not to want to have anything to do with him, despite his father's sympathetic and logical explanations.

Suspenseful, surprising and touching. I was gripped throughout and felt satisfaction at every turn in the plot.


The Kool-Aid Stoppers by Elisa Abatsis     6/10
In a society where people travel into the past to rectify human error, our narrator has travelled to 1978 Guyana to help halt Jim Jones, prior to the Jonestown Massacre. Despite the setting, the story opens with a good deal of humour. There is a major tone shift, as the narrator, like the narrative, removes the defensive humour cloak to reveal the private agonies underneath.


We Aren't Violent People by E.C. Barrett     6/10
In a post-flood apocalyptic world, a young woman must contend with being the new leader of a small segregated community.

The narrative bounces ideas of basic survival against notions of human kindness, not unlike those presented on The Walking Dead. The title has the implication of a "but," which is appropriate for its main theme.


Emptying the Bunkhouse by Vincent H. O'Neill     7/10
In a corporate-run future, seemingly governed by robots, convicts are offered freedom if they take part in the collection of all-important spheres in a complex series of caverns. The catch is that the environment is inhabited by hostile creatures that like to snack on humans. The "Bunkhouse" is their boat that drops them off each day to collect their quota of spheres, whereas the "emptying" can refer to a couple of things I won't give away.

Launching off from a premise borrowed from Stephen King's 1985 novella "The Mist," to the extent that the environment is early on referred to as "the mist," the story soon veers away from King to become something very much its own. A more complex plot than I was expecting, I enjoyed the story quite a bit, as it kept surprising me with its plot shifts. Primarily a futuristic science fiction adventure piece, with elements of monster horror and a dash of social and technological criticism, it all meshes together nicely.

Posted by Casual Debris at 11:54 PM No comments: