This lesser known novella of Ed McBain's 87th Precinct series is a quick, well written procedural, and though the overall idea has been seen in different forms, McBain (Evan Hunter) combines the grittiness of New York's darkest moments with a bittersweet tale of two bound women.

The novella follows the investigation of a young woman found murdered in her shabby apartment. Yet despite her meager dwelling, her drawers are filled with new clothing, wears expensive underwear, stores large amounts of cash in a safety deposit box, and has a second bank account comfortably weighted with $60,000. McBain intersperses the investigative scenes with descriptions of the city, some characters, and some bits about life and writing. My favourite aside is the opening to Chapter eight, which works as a great passage on writing and the reality of investigative police work, which both sheds light on and contradicts the writing itself.

"There are no mysteries in police work," McBain write. "Nothing fits into a carefully preconceived scheme... There is no climactic progression; suspense is for the movies." It's true that fiction is a stylized form of reality, where a certain level of order exists and in many cases is required in order to maintain its own sense of reality, to generate its inner reality that most readers require. Of course McBain's stories contain their own structure and order, and "The Empty Hours," like any other successful work, is approached with its plot and certainly has a climactic progression. Admittedly, though, McBain's story gives the allusion of plotlessness, as though the events are unfolding of their own accord. As though his plot is being churned out by the events themselves. It is a statement of his skill that the story unfolds with the straightforward, gritty nature of an actual investigation.

Moreover, the scenario of the two closely linked women and the unfortunate tragedies they encounter is tinted with genuine sadness, and the pathos is heightened by the straightforward telling of their circumstances; had we encountered an emotional write-up it likely would not be as affecting.

A story worth hunting down. 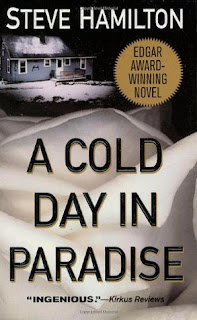 Posted by Casual Debris at 11:12 PM No comments: