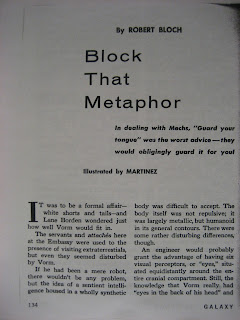 The extraordinarily prolific and often entertaining Robert Bloch has been continuously anthologized in various genre collections. Yet while some stories such as "Beetles" (Weird Tales, December 1938), "Yours Truly, Jack the Ripper" (Weird Tales, July 1943) and "The Man Who Collected Poe" (Famous Fantastic Mysteries, October 1951) appear and re-appear to seemingly no end, others such as "Block that Metaphor" are a surprisingly rare find. I managed to locate a copy of the original publication at the university library, who were kind enough to grant me permission to photocopy the pages of the archive-bound Galaxy journals. I've since given myself permission to post images of these copies to share with you all.

What is "surprising" about the story's rarity is that it is a great example of Bloch's fusion between humour and horror, and features a surprise ending which makes readers emit an odd sound as they struggle between the expulsion of air while laughing, to the ingestion of air in their expression of shock.

Moreover, "Block That Metaphor" is a science fiction story, a genre that Bloch, as prolific as he was, practiced only occasionally, though often successfully, having been awarded a prestigious Hugo for another oft-anthologized piece, "That Hell-Bound Train" (Magazine of Fantasy & Science Fiction, September 1958). In fact, "Block That Metaphor" may have been eternally overshadowed by the well-received Hugo-winner, which was published in MF&SF one month earlier.

In this story of the future, humans have recently struck relations with an otherworldly race. Members of this race have the ability to pick up subvocalizations, described as those little conscious thoughts we might have yet don't fully vocalize. Furthermore, they have a tendency to take statement and expression literally. The race is deficient in (though not absent of) emotion, and are overly practical, so that the colourful English language is often lost on them. And it doesn't end there. Since members of this race have no use of noses, they instead wear different attachments in the middle of their faces depending on the situation. Attachments are often ornamental, though some have more practical uses, such as a drill or sharp blade, should the need arise. 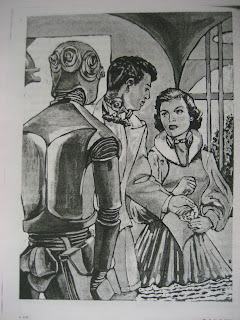 Otherworldly ambassador Vorm, is visiting diplomat Lane Borden at the Embassy, as they are attempting to reach an agreement concerning extraterrestrial mining. A final important detail concerning these aliens is that are coated by a kind of natural armour which prevents them from being harmed in gaseous or extreme temperature galactic mining sites. It's this coating that has led to the nickname "mechs," as in mechanical beings. This meeting is being held in secret, since the general population of Earth has not quite accepted the creatures, especially since, with their knack of taking things literally, including subvocalizations, they have accidentally harmed a few members of Earth's first contact crew. Lane has quite the task ahead of him, dealing carefully with this unusual visitor with all the pressure of a mob outside the Embassy, a large group protesting the current negotiations. During all of this he must also attend to his beautiful bride-to-be, Margaret Zurich, a talented classical pianist. Though Vorm has little emotion, he does love music, so that there is potential for equal footing and mutual understanding.

But since this is a Robert Bloch story, we receive a nice little package that includes a twist that is both horrific and humourous. Though the story exists primarily for its twist ending, Bloch manages nonetheless to create a fairly well-rounded story, detailing a truly unique alien and creating an appropriate situation and its corresponding circumstances. Had the story been half its length, solely fixated on the great ending, it would likely have been forgettable, but Bloch did well in expanding it, and though the plot is nothing revolutionary, for a ten-pager it is quite fun and effective.

The page-sized drawing on page 140 is by Martinez, and details the first meeting between Vorm and Margaret, who is keeping her composure while in the presence of such an alarmingly different humanoid. Martinez captures Vorm quite well as per Bloch's description. What's specifically effective is that we don't see Vorm's face, and this idea of nose attachments is left to our own vivid imaginations. Though this scene lies in the future, the human characters are throwbacks from the 1950s. Those headphone-like objects Lane and Margaret are wearing are devices that help to block out subvocalizations, a preventative measure. Nice shadows and detail nonetheless, and the meeting selected for the story's art is appropriate, since it eventually leads to disaster.

Posted by Casual Debris at 5:12 PM

"That Hell-Bound Train" is, however, a straightforward fantasy...it was a testament to both how beloved Bloch was in the fannish community and to the quality of that story that "Train" won what had originally been tagged the "Science Fiction Achievement Award" for a story that not science-fictional at all. It would not be the last, but it was the first.

For a story that is a heady mixture of sf, surrealism, and social criticism set in Apartheid South Africa, see Bloch's 1959 story, first published in FANTASTIC, "The Funnel of God"...collected in THE BEST OF ROBERT BLOCH and elsewhere...

Thanks Todd. I have some of Bloch's early paperback collections which I used to read as a kid. I didn't care for his early work, the Lovecraftian and Egyptian tales or the World War II robot adventures (though there are exceptions like the effective "Beetles"). Bloch's work in the 1950s was far superior, and he finished the decade with the novel Psycho, though I don't recall "Funnel of God." It's certainly time I revisit some of these...

Yes. Actually, he was definitely shaking off the excessive Lovecraft influence by the early '40s, and much of his latter 1940s work is what made him the Hammett/Hemingway/Heinlein figure in horror fiction, the one who introduced a calm, lean, conversational style in contradistinction to the perfervid default settings (better or worse-handled) of many around him. Much of his early sf is pretty wrote-to-order, for his buddy Ray Palmer who liked to keep things ultralight at his run at Ziff-Davis's AMAZING and to some extent FANTASTIC ADVENTURES (though the latter was initially a showcase for Edgar Ricer Burroughs and such...ERB had fallen out of favor, for the most part, and Palmer was floored to be able to showcase him).

Sitting down with THE BEST OF ROBERT BLOCH (fantasy and sf) and SUCH STUFF AS SCREAMS ARE MADE OF (horror and suspense), the two latter '70s retrospectives, is an excellent refresher. The SELECTED STORIES, not as much. But, of course, PLEASANT DREAMS and BLOOD RUNS COLD will do nearly as well, for a trip through the latest '40s and '50s work.

I not only remember this story, I remember the last sentence. I admire your restraint in not quoting it. As you say, "horrific and humourous".

Nothing to admire Steve; I wouldn't dream of ruining it for anyone who hasn't yet read the story.