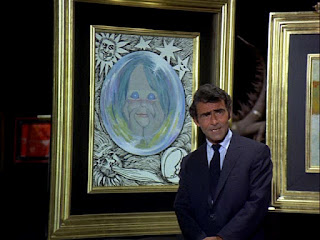 For an overview of Night Gallery and its pilot, please visit here.
For reviews of season one, please enter here.
For the following episode, please stay tuned.

Season Two of Night Gallery changes its unique anthology set-up to overall weakening effect. The first season allowed for as many segments as fit into its one-hour time slot, depending on the length of each. The thing is it didn't matter how long each segment was; there was no need to split the show into two clearly blocked half-hour segments. An episode could feature two or three segments, and the length of each segment could vary from ten minutes to forty minutes. Season two, however, introduced brief comical sequences which Serling himself opposed. It is unfortunate that the studio wouldn't allow Serling more control over the show, since clearly he still had a lot of creative ideas to work with, as proven by the series exceptional pilot and the overall strength of its first season. The comic sequences introduced in season two are downright embarrassing, many written by the show's producer, Jack Laird. The message sent to the viewer is that that the producers and the network didn't take such fantasies seriously, that the age of The Twilight Zone was a bygone age, and audiences were dumb and easily amused. Who needs serious, thought-provoking television when simple, formulaic anecdotes with silly ideas and tired punchlines were so readily available.

In the season's opening episode we have two serious teleplays, one deeply thought-provoking and the other more of a classic supernatural mystery. These were alongside two brief an forgettable comedies. 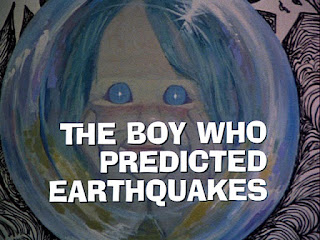 The  Boy Who Predicted Earthquakes
Rating 8/10
"I wanna tell you about tomorrow." Eleven year-old Herbie Bittman has a special talent: he can predict up to forty-eight hours into the future, and so far all of his predictions have been accurate. Herbie wants to share his predictions with the world, and manages to gain a spot on a local television station where he becomes quite popular with viewers. But it's difficult for someone so young to have access to all this knowledge, especially when the predictions become tragic. Herbie, however, proves to be mature and compassionate at all times, even when he must air his final prediction. 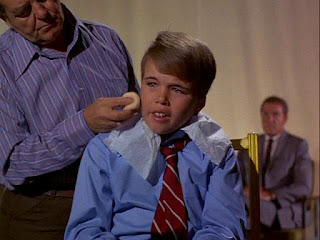 "The Boy Who Predicted Earthquakes" is a powerful little play. It starts off with surly station manager Mr. Wellman ridiculing Herbie as well as his own assistant Mr. Reed for booking him. The first half of the episode is driven primarily by Mr. Wellman, but Herbie takes over for the last chapter. Though the final prediction is shocking, the story focuses mainly on how an eleven year-old can carry the weight of such an unusual ability, and wonders at the stress he must be suffering. Clint Howard does a fantastic job at playing Herbie. He is certainly just a boy on one level, but carries with him a marvellous level of youthful maturity and conscientiousness, and it's this characterization that lifts the episode to greater heights. Michael Constantine is just as good as Mr. Wellman, who in contrast carries the weight of running a struggling television station. Wellman's world is on a roller coaster, initially plunging as his station is suffering and unable to discover new talented commentators, and quickly shooting skyward when Herbie charms the nation while in his studio. There is a near plunge as Herbie refuses to go on air during that final shooting, an important ratings week for the station. 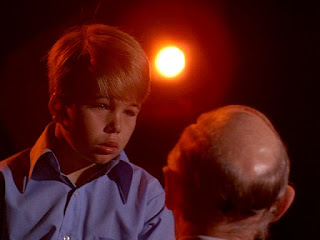 This is where Rod Serling's excellent teleplay works some real wonders. Well scripted from start to finish, Serling is all over the screenplay, from overly dramatic yet well characterized monologues, to contrasts between sympathetic characters and the arrogant. When Wellman is trying to convince Herbie to do the show, he is telling him that countless fans are relying on him, that they shouldn't be disappointed and wonder why Herbie is not on air that night. Essentially the public should not feel afraid. In Herbie's mind Wellman is right, but for less selfish reasons. Clearly Herbie has seen some kind of horrible disaster, worse than the earthquakes and sunken submarines he's already predicted, and he takes Wellman's wisdom to heart, agreeing to go live and doing his best in an abstract way to comfort viewers and ensure that they not be afraid.

Serling also brings in University professor Dr. Peterson (Ellen Weston) to counteract Mr. Wellman's hard-lined approach. She is sympathetic and understanding, a maternal figure, and the only one who tries to understand Herbie's talent, while being also the only one besides the boy's caring grandfather Mr. Godwin (William Hansen) who best understands the strain these predictions must be affecting the boy. The superb clincher at the ending reveals that the boy proves he can deal with the strain better than adults around him. 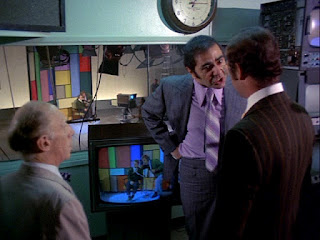 Along with the great acting and an excellent script, we have some creative technical staff. Throughout the opening sequences in the studio we catch glimpses of Herbie in the background and through various monitors. We catch our first glimpses of both Herbie and Wellman momentarily during the first studio pan, before they're even introduced to us. Continuity between what we see happening, what is projected on camera through various monitors around the studio, often behind the actual action is surprisingly accurate. The sound and voice recording is also superb, so that wherever Herbie appears onscreen his voice always matches his lips. There are also some nice colour effects, particularly at the end. A great technical achievement all-around, and I'm impressed the producers went for something so tricky for a twenty-minute teleplay.

Staff notes: Director John Badham will go on to direct five more Night Gallery segments, as well as popular successful films such as Saturday Night Fever, Blue Thunder and Stakeout; Michael Constantine has appeared in numerous television shows, including anthology series such as Naked City, The Twilight Zone, the original The Outer Limits, and Darkroom, as well as many films; Clint Howard is Ron Howard's younger brother, and has also appeared in various roles across television and film, including the later The Outer Limits, as well as several Star Trek series, including the original in the popular episode "The Corbomite Maneuver"; Mr. Reed is played by Bernie Kopell who is best remembered as Doctor Adam Bricker on The Love Boat, and has appeared on The Alfred Hitchcock Hour, and starred with Michael Constantine in Room 222; Ellen Weston appeared in Kolchak: The Night Stalker's "The Devil's Platform"; William Hansen appeared in Alfred Hitchcock Presents and Naked City. 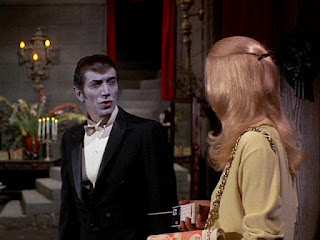 
The first comedic intermission and by far the worst from episode one. Dracula meets 1971 as a hip bubblegum cracking and radio toting chick shows up for a babysitting gig at the count's house. She was sent by a Miss Lovecraft, clearly a nod to Mr. Howard Phillips Lovecraft, who had little to do with vampires. Joseph Campanella appears as a very obvious Dracula, down to the rolling of the Rs. Comedic lines such a "We are always back at sunrise" are not even remotely funny. I am strangely glad they chose not to kill the girl, seen below unable to see the vampire's shadow. 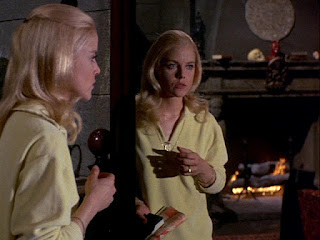 Poorly written by series producer Jack Laird. Campanella has been on Naked City, Suspense and The Invaders. Pretty Sue Lyon was the original Lolita. 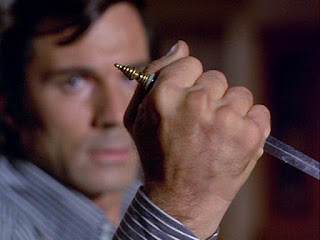 The Hand of Borgus Weems
Rating 6/10


"Arise my avenger, out from my bones."

Peter Lacland (George Maharis) appears in surgeon Archibald Ravadon's (Ray Milland) office demanding that he remove his right hand. When finally removed and Lacland is calmer, he explains his strange story. He has recently moved into town as part of his company's business venture, and soon finds that his right hand has developed independence. Moreover, that hand is trying to get him to commit murder. It phones a man and makes Lacland say into the phone the name Borgus Weems. When the man appears the hand tries to kills him. Later it forces a steering wheel to run over a lawyer, and later still to buy a gun to kill a woman Lacland has just met and fallen in love with. The good doctor Ravadon helps Lacland investigate the mystery, and the entire tale falls into the category of a classic supernatural mystery. Not bad by any stretch, it is certainly not as inventive and original as the episode's opening segment. The acting is fine but not stellar, though the editing is quite good, as we get flashes of Lacland's hand and other scenes at different moments, and this repetition actually enhances the suspense. Add to this some good music.

The single unbelievable aspect of this episode (even if you're willing to believe a dead man can take over the right hand of the living) is Lacland convincing Ravadon to surgically remove his hand. Just because he displays some desperation by bashing his hand with a paperweight? I think the point is that the doctor realizes it would be safer for him to remove the hand than allow Lacland to try to destroy it. This does not quite come across. 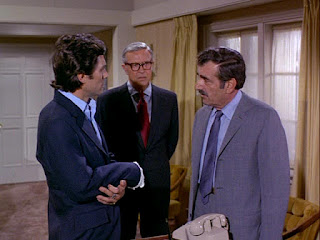 Director John Meredyth Lucas has worked throughout television as director and scriptwriter, most notably for the original Star Trek. He directed four segments of Night Gallery, including season one's first episode segment "The Housekeeper." Maharis is best known for his lead role in Route 66, though he's also been in four episodes of Naked City and several early dramatic anthology series. Milland was already a major film star by the time television drama reached his peak in the 1950s, though he did appear a few times on General Electric Theater, in a Robert Bloch story for The Alfred Hitchcock Hour, and later in Columbo. He's best known performances are his Academy Award winning role in Billy Wilder's The Lost Weekend, and his spectacularly charming performance in Alfred Hitchcock's Dial M for Murder. 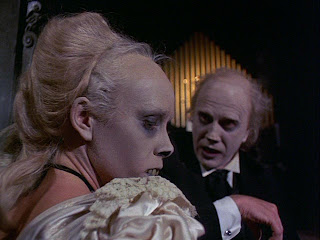 Phantom of What Opera?
Rating 4/10


The second comedic interlude is not as terrible as the first. Here the phantom brings his sopranic beauty to his underground lair, monologues his desire and intentions, until that final completely expected denouement. (If she's just like him, why did she fight so much at first?)

The great character actor Leslie Nielsen is good in the role, an actor who has appeared in most major early anthology series (some of which have been reviewed on Casual Debris). Mary Ann Beck does not appear to have had much of a screen career.

We don't get this show where we are - I especially like the sound of the boy who predicts earthquakes. I will look for this series at the video store. Thanks

Did you ever get to see it?