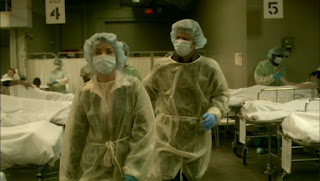 Previous episode: "The Fifth Page"
Next episode: you'll have to wait for season three.

A great title and a great first part does not a good episode make. The problem with many two-part television series outings is that the bulk of the twists and turns are reserved for the first part, while the second part plays out primarily like a denouement, an extended climax and resolution. With the exception of that final minute montage which is more a sneak preview of what to expect in season three rather than the ending of season two, there are no surprising events or stunning secrets to appear that we didn't learn of during part one. Well okay, there is one bit of news that did take me by surprise. 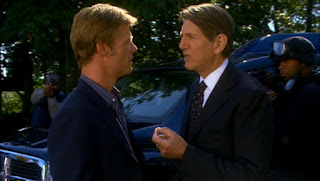 It's confirmed that Dennis Ryland is behind promycen inhibitor (PI), that the suits at government's upper echelon fear the powers of the returnees and have produced this inhibitor to allay their powers. Less than twenty percent of returnees have exhibited special abilities and that's thanks to PI, otherwise it's suspected that all four thousand four hundred should exhibit some power or other. Being smart agents, Tom and Diana figure out what's going on, and being conscientious they wish to report on their government, but Tom is in a bind as it turns out Ryland knows about Kyle and set up Marsden as gift to Tom. "Kyle hated quarantine. I wonder what he'd think about prison." This is the one surprise in the episode, and a good one at that. Amidst the government cover-ups I was sad to see Dr. Hudson knocked off, though not too surprised, what with the direction things were heading. The episode mimics aspects of The X-Files with our inability to trust who we work for, the government, and having to rely on our partners. 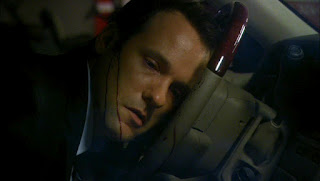 Among the better aspects of the episode are Richard's leadership and Lily's hallucinations. I began reviewing season two by criticizing the Richard and Lily sequences, finding them uninspired and uninteresting, and must here congratulate the writers for having brought the two to more engaging levels of characterization. Richard is doing a great job co-ordinating efforts to herd healthy returnees to a secret safehouse while trying to get his wife and child back into the fold. When the safehouse location is revealed, he is saved from having to make a decision as to the fates of the resident 4400, thanks to Tom's timely interruption. 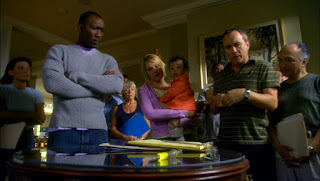 Lily is hiding away with baby Isabelle in a cottage that ex-hubby Brian has brought her too. While in hiding Lily is experiencing a range of visions, from thinking she's contracted the 4400 plague to experiencing Brian hitting on her, and then hitting her. Poor Lily thinks she's going mad, until she realizes that baby girl is feeding her these visions in an attempt to convince her to head back to the safe house. Once there Dr. Burkhoff uses Isabelle to create a serum to flush out the PI from everyone's system, thus removing the side-effects and saving their lives.

What bothered me most about "Mommy's Bosses" is the Kyle/Shawn sequence at the end. Kyle admits to having killed Jordan Collier, and Shawn heals him by removing the ball of light that was controlling his actions. The scene is just badly executed, actor Patrick John Flueger almost comical in the range of emotions that cross his face, along with some bad dramatic music and terrible special effects, not to mention really bad, hurried writing. Kyle prepares to turn himself in to the authorities for JC's murder, and I'm just hoping he won't be written out of the series. 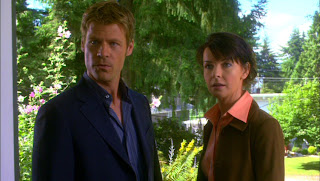 To contrast the awkward Kyle/Shawn pairing, the extremely brief dinner scene with Diana and Marco manages to be cute.

And in order to give the audience a whallop and a tease, Maia appears to let everyone know that things are not all right, that the War is just starting. This fails in both its teasing and whallopiness, since by now we're used to Maia's ominous portents.

This premonition leads into our musical montage, during which we witness Patrick gaining telekinetic abilities, baby Isabelle all grown up, and Jordan Collier resurrected at Mount Ranier, where the ball of light originally dropped him and the other returnees off.

With the plague over we can now tabulate the deaths: a total of 23 returnees have passed on due to the plague, leaving us with 4,371 members of the original 4400 still alive (six have died in previous episodes). Yet with the return of JC we find ourselves with a grand total of 4,372. 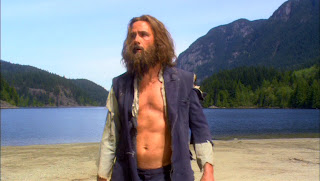 Thank you Anonymous. It's comments such as these as encourage me to keep going. Unfortunately there will be a delay before I can review season three as I will leaving the country for a few weeks. I'm also hoping to get Night Gallery Season 2 finished.