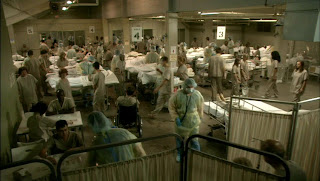 A suspicious title offers the second straight excellent episode of The 4400. It's the first of two parts and focuses on ailing returnees and a complete schism between the 4400 and the US government. 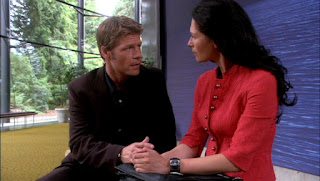 The episode opens with the promise of a new beginning and a sense of belonging as displaced Alana moves in with Tom and Kyle. Cozy it would appear, but Alana suddenly asks Kyle for a prescription for allergy medication. Tom reminds her that Kyle was a doctor only in their eight-year fictional life, and she grins, claiming she's just had a case of "brain freeze." Yet Alana grows more and more confused as the details of her two lives are merging. What looks like a great stand alone premise transforms into one part of the whole when we learn that she too has developed that mysterious rash that has stripped Maia and Shawn of their powers. Alana's powers aren't stripped, but she is losing her ability to control the life she leads over the one she created. 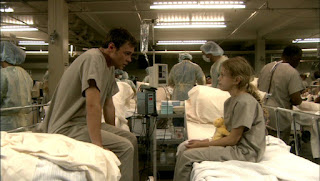 Returnees all over the world are succumbing to this rash, and NTAC calls everyone back into quarantine. While Jarvis is recovering from the gunshot wound she suffered in the previous episode, she is replaced by previous leader and Tom's good friend Dennis Ryland. Yet Ryland seems to adopted a hardcore attitude toward the returnees, and insists that even the healthy must submit themselves to quarantine.

Meantime, good friend from the previous episode Dr. Max Hudson is becoming a little suspect, especially since the fifth page of Maia's medical report goes missing, only to reappear with a couple of lines blotched out. Hence the episode title. 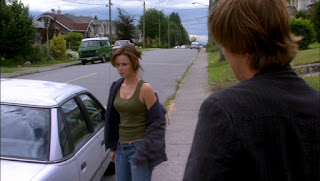 Meanwhile, at the other end of the episode, Kyle is guilt-ridden and visits Roy Marsden's home, where he encounters Marsden's suffering girlfriend Alison Driscoll (Keegan Connor Tracy) and Marsden's troubled younger brother Sam (Harris Allan). Both Alison and Sam think he has a thing for her, but Kyle insists that Roy is innocent and just wants to help. Alison is trusting but Sam isn't, and goes through Kyle's wallet, discovering his daddy works for NTAC. I just wonder why anyone, especially when assuming another identity, leaves his wallet on the couch in another room. On a side note, both actors (Tracy and Allan) appeared in Final Destination sequels, numbers two and six, respectively. Tracy has been in numerous projects, television and film, including a recurring role in Battlestar Galactica, while I recognize Allan only from that great Masters of Horror episode "Jenifer."


At the 4400 Centre, Lily is still suspicious of baby day care, as am I. Interestingly enough, ex-husband Brian is now being nice to her and first daughter Heidi seems okay. Shame on the writers for ending an earlier episode with Heidi ill, potentially due to baby Isabelle, and then pretending it never happened. Did the network complain that baby Isabelle is becoming too evil? That she must be a hero baby and not a devil spawn? Or did I miss simply something?

With Shawn ill Richard is promoted to centre spokesperson. A good choice, I think, since he has strong morals and a healthy sense of duty. As the third leader he will likely be the best. Not conniving and arrogant as Collier and not as boyishly arrogant as Shawn. Finally the centre gets an honest face.

That honest face must now deal with a split between centre and government. Ryland is threatening marshal law and Richard is telling the sick to enter quarantine, but the healthy to remain out, leaving many returnees on the run, seeking shelter in safe houses. The idea is that we are once again experiencing the plight of early Christianity. With JC gone, the minority Christians/returnees are facing persecution and must hide out from government agents. There are a few sympathizers who help out, but primarily the world fears and is hence against them. 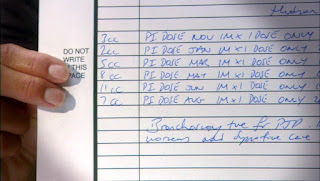 The episode ends on a great twist. The rash and fever are after-effects of promycen inhibitors (PI) that have been injected into returnees since their return. Promycen is what is causing their abilities. It appears the government has been suppressing the returnee talents, and consequently getting them severely sick. 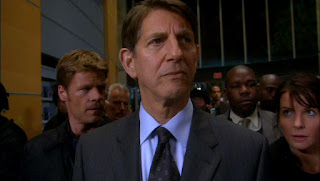 This image of government officials entering the 4400 centre makes me think of conventions in medieval Christian paintings depicting Jesus Christ and John the Baptist as infants (mostly by Italians). It's easy to tell which figure is Jesus (even if he isn't seated in the Madonna's lap), because John is always pointing at and/or looking at him. Baby Jesus, on the other hand, is pointing at the sky or at his mother. Mother has a pale yet distinct halo. These paintings were distinguished by many facets, yet always established a clearly defined hierarchy. In this shot, Ryland is in the forefront with Diana and Tom behind. I won't interpret the shot that Ryland is Christ because that role has already been given to Jordan Collier. Hierarchically, Ryland certainly is at the top of the political chain, and the look on his face as he looks into the centre is less than ecstatic. He is, after all, there to remove Collier/Christ's followers. Diana has a direct link to Ryland, making her the Baptist figure, while Tom is at the bottom of this trinity. Each is looking to the other for guidance. What do I make of all this? Very simply that I have too much time on my hands.