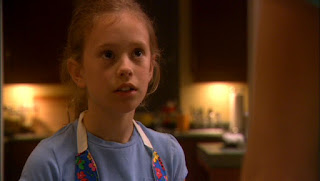 "Hidden" is not a terrible episode, but it's an unnecessary one that comes off as little more than season filler. The episode focuses primarily on the Kyle assassination plot, with a minor triangular sidetrack concerning Shawn, the return of Liv, and Danny. I'm really not sure why the episode was produced, since it doesn't progress the plot, only delays it.

First off, that minor plot involving Liv and some attraction between her and Danny is pointless. Nothing is gained and we end up just where we started off. Liv and Danny go to a party despite Shawn making it clear she cannot go, and Liv steals some pills which she tries to take with Danny. They're caught, Danny feels badly though he didn't realize she's a recovering addict, and Shawn tells Liv to behave. That's all folks. 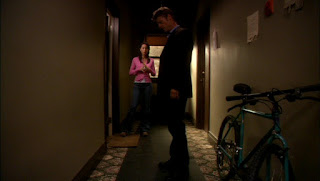 The episode opens with a warning from Maia, as she tells Diane not to catch Collier's murderer, since someone will get hurt. Of course she can't say whom, since the suspense would be lessened and we'd be dealing instead with one character trying to stave off injury or death. This way we're enshrouded with mystery.

Then we spend the episode with Tom realizing what Kyle's done, and searching for him. NTAC too is searching, and they have a lead on the murder weapon and a handgun the killer also purchased. This handgun is found in a storage locker, but Tom gets to it before NTAC. There are a multitude of problems with all this running around. First of all, why would Kyle buy a handgun and leave it in someplace as unsafe as a bus station locker, whereas he ditched everything else? What does he need with that handgun anyway? Secondly, how come Tom's fingerprints weren't found all over the locker? 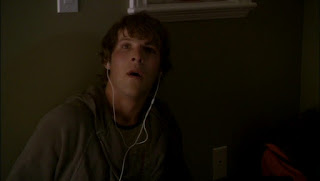 Tom eventually finds Kyle, there is some bonding, discussion of trust, and the understanding that Kyle is not responsible for Collier's death since the people of the future made him do it. The plan is to send Kyle to Brussels where he can stay with a friend of Alana's, but some cops capture a man they believe is Collier's murderer, and Kyle is off the hook. Can anyone define "convenience"? Well, as the person is brought in, a gun is grabbed a little too easily off a police officer, a shot is fired, a bullet heads toward Diana... and misses. All is well.

But the episode finishes off with a good line from Maia, and we know the danger hasn't yet passed.

And what about that police officer who let his gun get taken so easily? Don't police act cautiously around known criminals suspected of murder? Idiotic scene, the entire episode suffers from such convenient acts. 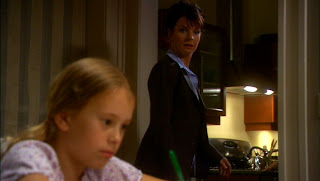 Posted by Casual Debris at 2:59 PM