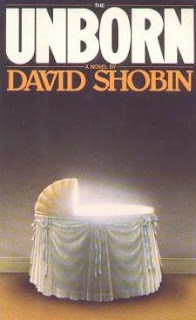 The Unborn is a standard suspense/horror novel, lacking in suspense and devoid of horror. At times it reads like a trite medical romance, though I mostly enjoyed its elements of technological parody. Unintentional, of course.

The plot deals with a pregnant woman taking part in a medical sleep study, during which the foetus begins to communicate with the medical centre's super computer. An interesting, far-fetched idea.

Author David Shobin is himself an obstetrician and gynaecologist still practicing in New York (as of the writing this articles publication, June 2010). The Unborn, his first novel, utilizes a fair amount of medical knowledge to narrate its story. While Shobin's knowledge certainly adds to the somewhat thin plot and does help to ground the far-fetched premise, I kept wondering how a sleep-study researcher knew so much about obstetrics, including obscure bits of information related to pregnancy and gynaecology. Is the smart, dashing and sensitive hero of the novel the author in disguise? Or perhaps, while the foetus was communicating with the super-computer, the doctor was in tune with the narrator; a more frightening prospect and a neat idea for a future Shobin novel.

The unusual premise and medical slant help to save an otherwise bland novel. The writing, characters and plot are weak, and though it is a fast read, a third of the 301 pages could easily have been shaved off. Shobin spends far too much time in the first eighty pages delineating these all-too-familiar characters. Samantha ("Sam"), the pregnant woman and Jon, her sleep-study doctor, are both highly intelligent, exceptionally good-looking and hyper understanding of each other. If not convinced of these qualities, rest assured that the author will not hesitate in reminding his readers just how intelligent and good looking these two are. The two fall in love, which is evidently what good-looking people do, and unfortunately they must prove their love again and again at the expense of the reader.

The good doctor has an older, maternal assistant who helps him professionally and socially, and cares about Sam as much as he does. The minor characters, and there are very few, are stock and impossible to tell apart. The computer, sadly, does not act as a character, but as a machine. Shobin had the opportunity to create a creepy menace but avoids it altogether, though at times Sam's foetus does come across in a nice, eerie light. 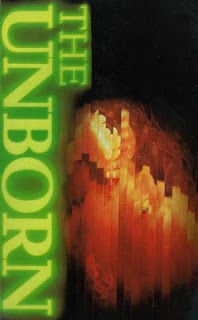 The writing is weak, but I suppose passable for a doctor trying to write his first novel. The sex is laughable and Shobin seems quite taken by Sam's breasts, though I suppose the attention he lavishes on them might be an attempt at enhancing the focus on maternity. Dialogue is paint-by-numbers and plot is almost non-existent while scenes are quite repetitive. The reader knows well in advance what is happening, so there is no suspense for us (though in abundance for the doctor and his assistant) until about page 200 or so. What kept me reading was wanting to know what will the foetus turn out to be? Freak, innocent child or Damien? I give Shobin credit for not overdoing this in the course of the read, since some authors might find it tempting to fill reams of pages wondering what freakish being resides in the pregnant woman's abdomen to the point that the reader will get fed up and no longer care. I will peculate that Dr. Shobin, during his career, has developed a sensitive view of women in their pregnancy, and I applaud his sensitive approach to what could easily have been a juvenile speculation. Hence little time is spent on such musings, with the occasional mutter from Sam, so that the reader's own imagination can wander at will.

The Unborn was published in 1981, and social and gender roles come across awkward and self-conscious, with the good doctor clearly acknowledging that abortion is the woman's choice. Shobin wanted to make his doctor the well-rounded yet perfect modern male, who is sickened when he feels used by sex and all-understanding of women's lib. Modern at the time perhaps, but a little contrived and comical today.

Moreover, the computers are clunky machines of the past. I mention above that Shobin missed an opportunity in creating a menacing, life-like computer, but in reality this machine may have appeared more frightening in the dark ages of the early '80s. It is indeed 1981, and these massive data banks and "minicomputers" are hilarious. Have a look at Shobin's description of the precursor to the home computer:


"The minicomputer was a marvel of electronic wizardry and mechanical miniaturization... A product of advances in quartz and gold microcircuitry, the entire unit was twelve inches high and one yard wide, with a separate typewriter console for programming."


Not to mention a printer that filled up a closet and spat out folded reams of paper. Of course our brave doctor is also somewhat of a technical expert and manages to cross-wire his minicomputer with that of the medical centre's highly prized and tightly secured, multi-million dollar super computer. 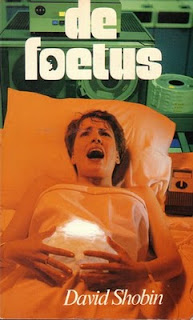 I'm not sure what to make of the 1981 cover pictured at the top, but that it seems to beg for a sequel. As expected, Sam doesn't go into labour until the last few pages so there is no glowing baby in a crib. The 1982 paperback is identical but for a brief tag line below the title: "Before the baby cries you will scream." Whatever that means. I understand that labour and often pregnancy can be painful, so a scream or two is not unnatural. The cover on the left is by Pan, from 1982, and the one on the right is a Dutch translation. I am somewhat confused about the concept of glowing babies, or a glowing foetus. The woman on the Dutch edition cover looks nothing like our darling American Sam; in fact, the woman on the cover doesn't look at all pregnant. She looks like a healthy woman lying in bed and clasping an evidently scalding crystal of some kind. There are two things I like about this edition: the wonderfully appropriate dated technology hard at work behind her (is that a Geiger counter resting on her left beside the pillow? Is that crystal radioactive?), and I love the letter O in the title (take a closer look).

But I believe I have nit-picked enough about this novel and it is time to set my typewriter console aside, rest my minicomputer and pick up a better book.

I read the book when it came out in 1981, and found it very fascinating, especially for its time!

Hi Cathy. Would you mind expanding on why this was so fascinating back in that dark era of 1981? Was it the advanced technology, treatment of gender roles (very awkward in the transitional 80s), or a culmination of the above? Do you believe it has maintained its relevance?

Thanks for popping by.

I read your Joe Hill review (Heart-Shaped Box), a book that I have nearly finished... you link to this review, saying Hill is good but he's no David Shoburn -- obviously based on this review it's not one of Shoburn's better efforts. I've never heard of Shoburn; could you turn me on to some of his better books? I like Hill -- he's Stephen King's son, right? -- so if you could recommend other authors too I'd appreciate it....

Thanks for dropping by Ed. What I actually wrote was, despite there being so many problems with Heart-Shaped Box, Hill is not a bad writer (he is no Shobin). Meaning (I had hoped) that Shobin is a BAD writer. I was being tongue-in-cheek. Apologies for the confusion. For good horror writing, other than the classics, I can recommend Harvest Home by Thomas Tryon (despite it's predictability), Song of Kali by Dan Simmons, and the excellent collection by Douglas Clegg, The Nightmares Chronicles, all of which are reviewed at Casual Debris. I can also be contacted at casual.debris@gmail.com.

Hi, I just wanted to say that that translation is in Dutch, not in German. Enjoyed your review !

Much appreciated Franky for catching & letting me know of the error! I have now corrected it in the text. Thanks for the kind words and for dropping by.