The Other at Goodreads

The tagline to the 1976 Fawcett Crest paperback edition of Tom Tryon's first novel reads: "You have never read a novel like this one." The proclamation, as bold as it is, is fairly accurate, even as we near 2020. 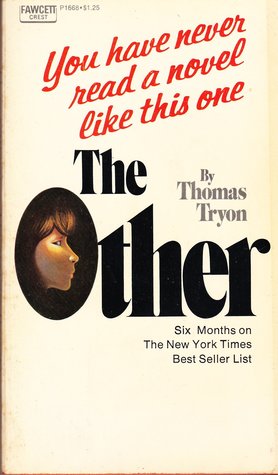 Well into the economic depression of the 1930s, the Perry family lives in relative comfort, subsisting on the meager yield of their aging farm. During this particular, sweltering summer, thirteen year-old twins Holland and Niles pass their time playing imaginative games and guarding their little secrets. Yet the atmosphere is heavily strained, and their relationship seems to be deteriorating as the family is dealing with the tragedy of their father's recent, violent death. It is the story of a family suffering from depression, amid a broader societal Depression.

An incredibly well written novel, whose suspense and horror is overshadowed by genuine family tragedy. Stripped of its horror, The Other would be just as effective as a family drama, as its characters are excellently drawn, including the bit players in the New England town. As with most successful horror novels, we feel the tragedy that the members of the family experience because these people are so very real, and even if we do not like them, because they are so real we nonetheless empathize with what they are going through. The mother who is practically bed-ridden in grief; the preferred son who feels the need to minister to his mother; the grandmother who must care for that fragile boy whose entire family has, in some way, abandoned him; the guilt-ridden groundskeeper who suffers for an act of which he is not guilty; the grieving aunt and uncle; the pregnant sister about to bear her child.

These characters live in a contained environment that becomes so vivid as we read, Tryon might as well have drawn us a map. Sheltered in this wide open yet nonetheless claustrophobic environment, we see the events, both minute and tragic, through the eyes of the good twin. Niles, sensitive and caring, looks up to the cruelly mischievous Holland. Because Holland appears to have distanced himself from his brother and the farm, Niles is left to wander near aimlessly around home and town, immersed in his imagination and watched by his Ukrainian grandmother. Alongside his meanderings, we learn of family history and family dynamics.

Whereas many suspense novels of the period, including Tryon's strong 1973 follow-up, Harvest Home, have in the modern era become fairly predictable, The Other retains much of its initial power. It is not just the effective ending, but other unexpected revelatory incidents throughout the novel that strain our emotions. Because the novel is patiently paced, the build-up and end-result creep up on the reader, and I found myself to be more immersed in this world than I thought I was while actually reading. It's as though we were placed in a slow-boiling cauldron, comfortable at the outset, unaware that we are in fact being cooked alive. (With apologies for the analogy, but I recently completed Shogun.)

Well worth a read, even if your copy is as dilapidated as this one.

For additional information on The Other and its author, Thomas Tryon, please read this enjoyable and informative article by Grady Hendrix.