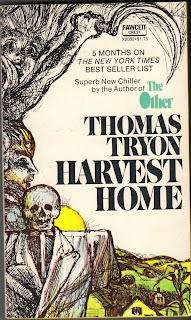 
The early 1970s experienced a mini-trend in pagan-related horror, pagan communities subsisting in modern society, featuring harvest rituals, heaps of corn and various forms of sacrifice. The three that most readily come to mind are the excellent Robin Hardy film The Wicker Man (1973), Stephen King's short story "Children of the Corn" (1977), and their predecessor Harvest Home, Thomas Tryon's follow-up to his successful first novel The Other. Each of these stories focus on long-standing farming communities that maintain traditions dating back to the communities' early days, and deal with outsiders, crops and, of course, sacrifice. All three pieces are quire strong, and Harvest Home, forty years after its publication, continues to generate a strong response, despite being out of print.

[I have read in some places that The Wicker Man was based loosely on Harvest Home, yet this makes no sense since The Wicker Man, released the same year that Harvest Home first saw publication, was filmed the year before, and no doubt drafted even earlier.]

Briefly, the story is narrated by Ned Constantine, a New York painter who, along with wife Beth and daughter Kate, move to the isolated rural Connecticut community of Cornwall Coombe. They discover the town by chance, falling in love with an empty house that the townsfolk at first are unwilling to consider selling. Months later Ned receives a call offering the house, and urban American family settles into the quiet community.

"WARNING: DO NOT READ THIS BOOK IF YOU ARE ALONE. BUT IF YOU DO, KEEP REPEATING TO YOURSELF, "IT'S ONLY A BOOK. IT'S ONLY A BOOK." This hyperbolic announcement, blaring in thick bold type at the top of the back cover, is perhaps ingenious 1973 marketing at work, and may have helped propel the novel to many bestseller lists, but it is unfortunately misleading and might even lead to disappointment to contemporary readers. The novel contains clear horror elements, yet the weight of the plot rests on elements of mystery and suspense. Indeed the first three quarters of the book read like a cozy mystery (minus the humour element) rather than a piece of horror, as Ned first begins to integrate into the community, and slowly discover that something is amiss. The last quarter of the novel is very much horror, more akin to classic horror than anything modern; we are still shy of the era of Stephen King and Peter Straub.

Community conspiracies are prevalent in varying forms of horror, from novels such as Ira Levin's The Stepford Wives to recent television anthology episodes of the Forrest Whittaker-hosted Twilight Zone ("Evergreen") and Mick Garris's lackluster Fear Itself ("Community"). There are unavoidable elements of irony in that the reader, aware that the novel (or show) is of a genre, are a step ahead of the protagonist for the bulk of the plot, whereas the sequence sees the narrator defeated by the community.


Which brings us to the major flaw of Harvest Home. Once he understands what is going on at Cornwall Coombe, and that he and his family are in danger, rather than tell his wife and daughter what is going on and quickly drive them back to New York, he keeps the secrets to himself and decides to catch a sneak peek at what goes on during the night-time ritual of the annual Harvest Home celebrations. Constantine, overall, is not a sympathetic character: he i aggressive, macho, and though he genuinely cares for his family, there is a certain distance between himself and both Beth and Kate. We learn early that their marriage has been troubled, as has Kate's upbringing as she suffered health-wise via her parents' difficulties, and this history makes of them easy targets for Conrwall Coombe's unique society. The novel, with its matriarchal universe, can almost be read as a kind of 1970s feminist treatise, where a traditional matriarch defeats the modern macho male, except for the hints of misogyny that creep into the text. Most of the women, including Beth, seem to be derived from the 1950s wife ideal, and this would be great if it were addressed, that the housewife of old is a vessel for a strong woman, someone repressed and finally breaks through that shell via the Harvest Home celebrations. Alas the text does not address that issue, and these women come across merely as dated.

Despite this bothersome flaw, the novel is well written, well constructed and the community terror is very much real. Cornwall Coombe is populated with various characters, and the most frightening aspect of these people is that the tradition of Harvest Home is so embedded in their lives that even those who do oppose it are trapped by an age's old tradition.

There was an NBC miniseries based on the novel titled The Dark Secret of Harvest Home. It features a recognizable cast with Bette Davis as the matriarch Mary Fortune, Rosanna Arquette as Beth, Rene Auberjonois as the peddler Jack Stump, Norman Lloyd as the bell ringer Amys Pemrose, the wonderful Donald Pleasance as Narrator (interesting, since the novel is narrated by its protagonist), and in the role of Ned (re-named Nick, perhaps to make it more obviously Greek), longtime television actor David Ackroyd. I'd be interested in watching it, as it has a good reputation.

Posted by Casual Debris at 8:27 AM