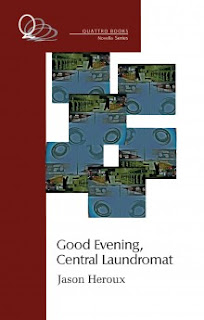 This review was salvaged from oblivion by author Jason Heroux. It appeared in the online cultural journal The Rover in July 2011, and, as is the fate of many web journals, The Rover is a thing of the past. Since unlike print we don’t have copies floating around, it is left to readers to print or repost content in order for the review to remain in circulation. Luckily for him, and Mr. Heroux himself, he posted the entire review on his blog.

And now I am reposting it here.

The novella, little read it seems, is worth hunting down, and I am looking forward to a re-read.


Cameron Delco’s girlfriend Viola is losing her voice, his friend Ray has asked him to attend his assisted suicide, and a pigeon has taken up residence in the Laundromat he and Viola own and operate.
Cameron is the narrator of Jason Heroux’s surreal novella Good Evening, Central Laundromat. Though a fairly average guy, Cameron proves to be an appropriately passive narrator for these events. He takes things in stride, acknowledging the odd occurrences but unwilling or unable to consider their significance. The world around him seems to be changing, yet Cameron himself is slow to develop.
Cameron is the glue holding his world together. Simply by maintaining his routine — from running the Laundromat to attending to Ray — a strange new reality takes shape around him. Though he refers to Ray as a ghost, it is in fact Cameron who is wandering through life without leaving a solid impact on the world. Ray, on the other hand, is obsessed with his own place in the world. “I know I’m already dead and everyone’s just pretending I’m alive,” he tells Cameron after failing at his first suicide attempt. “I was hoping if I went through the motions and killed myself I could finally end it all.”
Good Evening, Central Laundromat is an attractive and slim little book, part of the Quattro Books novella series; a great series that has allowed this unique and highly entertaining read to find an audience. It is a surreal work filled with healthy ambiguity, dealing with notions of existence, of going through the motions of living, and of our impact on the world and the people around us. The prose is simple and straightforward. This allows the odd elements to appear natural so that, like Cameron, we are able to accept these events at face value and move ahead. Of course there is a great deal happening beyond the surface and we read on intently, wondering whether Cameron can awaken and break the tired cycle that has become his life. The Laundromat, with its own cycles, is emblematic of both Cameron’s routine and his unwavering commitment to that routine. The title itself is ambiguous, referring to Cameron’s telephone greeting while also evoking his daily presence at the Laundromat, as though he were greeting it.
The dialogue is excellent, the conversations natural whether the topic is infused with the commonplace or by weighty observations. There are some nice touches to enrich the mostly straightforward prose, from elegant similes to ambiguous statements: “I couldn’t hear any traffic,” Cameron says when trying to sleep. “The roads were clear. Everybody was where they had to be and no one was going anywhere.” The greatest irony is that the only character seemingly going somewhere is the one who believes he has already died.
With Good Evening, Central Laundromat, Heroux has succeeded in creating a unique work that is simultaneously thought-provoking and entertaining. It is great to encounter a work that is not only unique but refreshingly well written.

Posted by Casual Debris at 9:10 PM