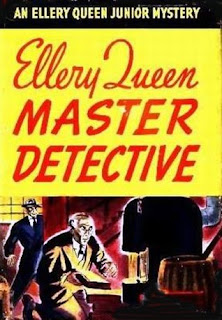 Because it was published in 1941, I assumed this novel was written by Ellery Queen (Frederic Dannay and Manfred Bennington Lee), and that it is actually a novel. Wrong on both counts, which leads me to claim this adage: Never judge a book by its date. The book is in fact a novelization  of the film Ellery Queen, Master Detective (1940), which in turn was based loosely on an earlier Ellery Queen novel, The Door Between (1937). This novelization was among the first books (perhaps even the first) published under the name Ellery Queen but written by a ghost writer. The identity of this ghostly writer appears to be unknown. The book was reprinted in 1968 under a new title, The Vanishing Corpse.

As a novel, The Vanishing Corpse is highly entertaining. It's short, straightforwardly written and manages to sustain a good mystery. In brief, the case involves the death of John Braun, the founder of a health centre who is found dead in a locked room. His throat was cut yet there is no weapon around and no way to access the room other than through the locked door. It is a genuine locked-room mystery. Before becoming a corpse, John Braun discovered that he was dying of cancer, and cut everyone but his wife from his will. Moreover, he gave instructions to close down his lucrative health resort, upsetting his various business partners. Before the actual murder, when Inspector Queen is considering taking up the case of the estranged and missing Braun daughter, Ellery Queen wanders in looking for a good plot for his next novel. Pursuing a lead in locating Barbara Braun, he encounters love interest Nikki Porter, friend of Barbara's. Nikki doesn't remain just a friend, since soon after Braun;s death she is upgraded to primary murder suspect.

The screenplay for the film was written by Eric Taylor, so he should receive much of the credit, even if just for the dialogue. The story was evidently conceived by Dannay and Lee, the prose transposed by a ghostwriter, yet the dialogue belongs to Taylor, who had a busy two decades as a screenwriter until his unfortunately early death. While the comedy does slow the pacing of the mystery, particularly in the early portion of the novella, the bantering is quite good, particularly between Ellery Queen and Nikki Porter. There are comedic gags as well, such as the burnt steak, but though familiar nonetheless well rendered on paper. With Nikki we have another 1940s gal who is less than an ideal housewife, not necessarily marriage material for that reason alone, but is nonetheless good looking despite being also a bad fiction writer. Yet while she can't cook she is neat and organized, so I guess we can't sway too far from 1941 social norms, and when we do it's supposed to be funny, which it often is. Kudos to Taylor for keeping it funny for seventy years later. 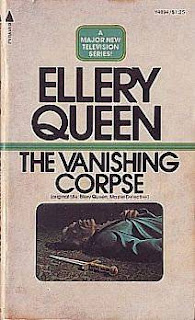 It's odd that the reprint title selected was The Vanishing Corpse. Yes it sounds interesting, and the disappearing body makes for good suspense in the text, but the vanishing occurs more than half-way through and is, because of the title, expected, hence removing a possible surprise. "The body... it's... it's... it's gone!" Well of course it is, officer, just look at the title.

The mystery itself is quite good, and though I figured out the murderer's identity early on, most elements of the crime evaded me, such as how the weapon went missing, which really I should have figured out. For a locked room mystery it's clever enough as well as believable.

I do have a few other early Ellery Queen's lying around, including some older attractive hardcover editions (which are actually shelved away, unlike most of the paperbacks), and I'll likely feature another at some point down the line.

Thanks for visiting, and please feel free to recommend a good Ellery Queen.

Posted by Casual Debris at 8:09 PM

I always assumed that Taylor himself may have written the novelisation as he started in prose before becoming a screenwriter. I remember picking up another of these, THE PENTHOUSE MYSTERY, as a youngster and not realising that it wasn't exactly kosher Queen (sic). But then I didn't know that Lee was largely absent from the collaboration in the 60s anyway. My personal favourites include THE GREEK COFFIN MYSTERY, THE SIAMESE TWIN MYSTERY, CAT OF MANY TALES and FACE TO FACE, one of last genuine Lee/Dannay collborations (apparently).

Great call about Taylor; he'd be the perfect suspect since a lot of the work appears to be transcription rather than actual writing. The book was published a year after the movie's release though, rather than simultaneously, so it's possible someone else was later commissioned. But it could have had an intended 1940 release, and the release delayed since the movie was less than a hit and likely disappointed some EQ fans.

I've been a Queen fan -- the actual stories, not the ghost-written ones -- since I was a young teen. The novels that Sergio mentions, above, are a good place to start, esp. "Cat of Many Tails" (1949), an early serial killer novel about Ellery's hunt for a multiple murderer the papers have dubbed The Cat. "Greek Coffin," "Siamese Twin," and "Egyptian Cross" are all fine puzzle mysteries, but "Cat" is about character (Ellery's and others') as well as mystery.

Thanks for the suggestions. I actually do have some of the "real" Ellery Queen's and I do believe I have "Cat of Many Tails" in a hardcover omnibus. Somewhere.