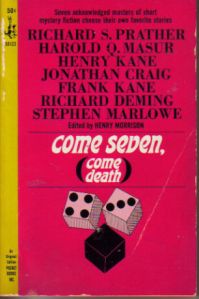 Though a fairly obscure book, it was covered for FFB two years ago by Randy Johnson at Not the Baseball Pitcher.


When I was a kid my parents invested in a small apartment building. They didn't own it for very long: the area was sketchy, the work was just too much, and a large number of tenants turned out to be problematic. Among the problems were midnight moves; people jumping back rent by moving out in the middle of the night. The only advantage to these midnight moves is that tenants were forced to leave some belongings behind and my parents had to content themselves with rent replacements, such as furniture, a kitchen knife they still use, assorted miscellanea, and of course books. Lots of books. From first edition Nancy Drew titles to Harlequins from the 1970s, along with a wide assortment of mystery paperbacks. Many of these paperbacks we later sold to second hand shops, which I now regret as they are (or might be) collectables. Among those was this tiny anthology I hung onto and have finally gotten around to reading.

The anthology is an interesting mix, a selection of the great mystery detectives from the 1950s brought together in the mid-1960s. The stories are original to the anthology, no reprints, and clearly some of the veteran authors either had fresher ideas for their aging detectives, or took the project more seriously than others. Which is to say there is quite a discrepancy between the quality of the different stories.

Prather's noir is stylish, the prose floating on well constructed witty sentences. The characters are simple, though appropriately so for such a whimsical piece. The only disappointment is that the ending is not as good as the beginning, and the solution to the mystery itself is clear early on, especially considering there is only one suspect. This isn't too problematic, though, as the story is not about the mystery but is instead invested in the comedy, and does a fine job at that. Reading this story for a second time was just as entertaining as the first. I wonder if this story has seen much light since leading this little paperback.

When New York defence attorney Scott Jordan's petty thieving client Bertram Heckler doesn't show for his morning hearing, Jordan rushes over to his apartment and discovers the small-time crook beaten nearly to death. In a few hours Jordan encounters a second near-corpse, a dead man, and a number of crooked individuals. And of course there's the requisite beautiful dame. A good little mystery, fast-paced and told through the charms of tough guy DA Jordan. There's also an amusing early reference to LSD: "What's that?" Jordan asks. "A drug used by psychiatrists. It's called instant analysis. Cleans out the subconscious like lye in a sceptic tank."

(Masur was a regular contributor to the top mystery magazines of the 1950s-1970s, including Alfred Hitchcock's Mystery Magazine. For Hitchcock, or more appropriately, for Random House, he ghost-edited a couple of hardcover anthologies following the passing of Robert Arthur, including Alfred Hitchcock Presents: Stories to Be Read with the Lights On (1973). While I generally like Masur's short stories, I never thought he was as good an anthologist as his predecessor Arthur.)

Peter Chambers is helping rising actress Rosanne Hamilton with some phone calls she's been receiving, calls threatening the life of her father, Judge David Hamilton. Meanwhile, the judge has threatened to disinherit his daughter, demanding she leave the stage or he will bequeath his fortune to two colleagues, including her recently separated husband George Hudson, known as "the memory guy" due to his photographic memory.

Kane's story points so clearly to the mystery's solution that, as I was reading, I was immediately piecing the parts together. Like one of those giant piece jigsaw puzzles for kids, the ones with only six pieces that you know where to place each component only by glancing their way. The idea is ok but it's lazily constructed and certain parts feel rushed that's it's simply not a very good read. Oddly, and irritatingly, the story blurb on the back cover even gives the ending away. Perhaps the person responsible figured out the mystery on page one and assumed it was so evident that it was not a solution but a piece of the puzzle.

Detective Johnny Liddell receives an early morning visitor, a blonde bombshell who asks him to help her brother who is being framed for murder in a nearby small town. So Johnny has his way with said bombshell and heads off to the small town to stumble into some organized crime. And he does in fact stumble into it, since rather than investigating and figuring things out detective-like, someone tells him what's going on. Then we get more exposed breasts, full ones, and some fighting with fists, knives, guns and an open window fifteen floors up. (For whatever reason this small town has some tall buildings.)

Not a good story. The emphasis on voluptuous blondes and redheads with cascading hair and full breasts with a sort-of mystery conveniently tossed in does not make a good story. I know it's 1965, but the fact that Liddell sleeps with the blonde sister when she's terrified for her brother's life is tasteless. Liddell is, in this story at any rate, not much of a detective, just a womanizing, weapon-wielding tough guy. And the "frame to match" business is poorly executed; essentially Liddell speculates that the witnesses who signed off on the the blonde's brother's photo, pinning him with the murder, signed the back of the photograph unaware that it had been stuck to photo of the real killer. Yet this isn't proven, just tossed in as a theory which everyone's supposed to lap up 'cause he's the hero of the story. Sigh.

If I'm ever falsely imprisoned, please don't call in this guy.

"Perhaps--like so many other unpleasant things in this life--it will just have to run its course."

Neal Cranston is murdered in his basement, and Detective Pete Selby is called in to investigate. A wealthy and reclusive man, Cranston spent his time repairing old jukeboxes and nickelodeons. He was also a soft man, much to the disgust of his proud brother Howard and his spiteful wife Elaine. Yet for a reclusive man there seem to be innumerable suspects, like the pretty model Bonnie Lambert, her jealous and obsessive admirer Wayne Ferris, Elaine's lover bartender Vince Miller, and the mysterious Roy Stark.

I was glued to this story, its various characters and convoluted relationships. What appears to be a fairly straightforward mystery, with Selby seeking out suspects and interviewing them in due course, transforms into tragedy, and the end is worthy of its suspenseful investigation. I know Craig was big in his time but this is probably the first of his works I've read, and having read it I will make a note to seek out more. Hopefully this tragic piece has made its way into an anthology or two.

Manville "Manny" Moon meets friends at the classy El Patio resto club just when a man is being tossed out. Unfortunately the consequence of this act manifests in a bomb being later tossed in through a window, killing a patron. Moon spots the culprit as he flees, and suspects that the affair is part of a recent shakedown in which a crime syndicate is extorting money from neighbourhood restaurants in return for protection.

Though the story is a fairly straightforward mystery, the denoument is quite good, another piece of noir tragedy. Fisticuffs and beautiful women play their parts, but their parts are necessary and not over-the-top.

Chester Drum is in Cannes on vacation when he is hired by expensive prostitute Caroline Thevenin to shadow her baby sister. Thing is, innocent sister Gabrielle recently walked in on Caroline and learned at sight of her sister's profession, and in her shock and dismay has been spending Caroline's savings on drink and gambling. The shortest of the stories in the little anthology, "Baby Sister" is quite forgettable. There is nothing remarkable, original or unexpected that occurs, the plot structure is a little sloppy with all the backtracking as to how Drum got involved with Thevenin. And the last line made me groan.