All These Little Worlds: Stories from the Fiction Desk 2 (2011)

For my review of Various Authors, please visit this page.
For The Fiction Desk website, please slide over here. (And if you can, please support them by subscribing.) 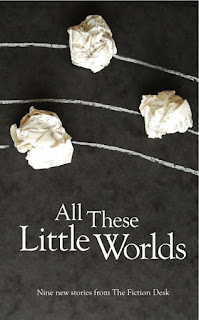 For the Goodreads page, take a free ride to this link.

Having enjoyed the stories included in Various Authors, and having been introduced to various authors, I was looking forward to The Fiction Desk's follow-up, All These Little Worlds (which for a few months I kept mis-reading as All These Little Words). No matter, since the anthology contains nine worlds, each in turn containing several words. As with its predecessor, this collection is a nice mixture of straightforward literary realism with some fine examples of the literary fantastic. What I've liked so far about these Fiction Desk anthologies (well, the first two at least) is the inclusion of literary fantasy (or contemporary urban magic realism, if you prefer). I've stopped reading many journals due to their lack of imagination, since practically every story starts reading just like its neighbour (this was the case with the respected yet ordinary Glimmer Train). There is much of the ordinary in literature, and not enough of the extraordinary. The combination of realism and literary fantasy is well balanced.

(As an aside, I use the term "literary fantasy" simply not to confuse with straightforward fantasy, as that word standing by itself conjures for many sword and sorcery and little hobbits.)

In one way Worlds ups the ante over Authors simply by including a novelette. A risky move for a 167-page anthology, since Lambert's thirty-pager takes up about 18% of the anthology. One bad long story can drag the entire book down 18%. That's pressure. Yet the publication does well, selecting a strong work and placing it nicely as the third story following something far lighter in tone.

Of the nine stories I liked eight. As part of The Fiction Desk's award for the "best" story in each of its anthologies, Worlds authors voted James Benmore's "Jaggers & Crown" as the best story in the anthology. A truly fine story among many, but my vote goes to Halimah Marcus's "Dress Code," a real surprise.

On a morning just like any other, Kevin Crown is settled with breakfast and the paper and notices an unusual heading in the obituaries: "Kevin Crown 1930-2011." Naturally, reading the surprisingly short entry, Crown begins to reminisce about his career as straight man to the incomparable and risqué comedian of the 1950s and 60s, Sonny Jaggers.

The story of old-time comedic duo Jaggers and Crown is familiar, and its familiarity helps place it in the annals of the golden age of western entertainment. Yet of course the duo is fictional, but Benmore managers to create a convincing and interesting bio of the team, wonderfully brought to life through Crown's own voice. We have an alcoholic gay front man in the 1950s who is redefining radio and early television comedy, while battling demons in a bottle (and through the form of a nutty clairvoyant). The story is told in a light and straightforward manner, ending on a kind of punchline to a subplot that is worthy of early radio. What I liked most about the story is the tragedy of not Jaggers, but that of Crown. While Jaggers died young and in his prime, Crown was destined to live until an eighty year-old nearly forgotten side-kick. This is not an element at the forefront of the story, which helps to heighten its inherent layer of tragedy, as the well meaning Crown becomes the side-kick of his own life story.

"Swimming with the Fishes" by Jennifer Moore. 7/10

At the pet shop Mum gets her children a diver. His name is John. A diver is evidently a little man who lives and swims around a household aquarium. The unnamed narrator is the little girl who is totally taken by the diver, while her little brother Davy wants something a little more exciting.

I appreciate The Fiction Desk's openness to literary fantasy and the unconventional. In Various Authors we had some great selections, most notably Patrick Whittaker's great piece "Celia and Harold." While "Swimming with the Fishes" is a good fun read, it lacks something above the element of fun. The ending sort of transforms the piece into a bit of a joke, though (without revealing anything) there is the implication that modern children are so spoiled and self-involved that the life of others has little value to them. Spoiler: Davy's final act of flushing John is notable in that while the diver is a pet, he is also sort of human, and if we are to continue along this thread, how will future children respond to actual humans when they cease to be amusing? This act is foreshadowed by the story's ominous title.

Lambert's novelette features teenaged Italian Francesca, daughter of a separated and self-absorbed wealthy couple, who is sent to the UK for the summer to a boarding school filled with seemingly unwanted wealthy kids. Her mom tells her that with the recent string of kidnappings in Milan, Francesca will be safer elsewhere, yet the girl feels she is being dumped. She is soon clung to by a spoiled Spanish girl named Pilar, and befriends homeless boy Garry, with whom they plot a little kidnapping of their own, which they title "Operation Pretty Vacant," or OPV.

The term and title "Pretty Vacant" can be attributed to a variety of story aspects. We are dealing with spoiled and unseeing teenagers from different classes. Sure we feel sorry for their having been abandoned, but like their materially-driven parents they are wholly self-interested and motivated by childish emotion. These are teenagers who won't grow up, not just because their circumstances have dragged them down, but because notions of self are so ingrained that they live by childlike instinct. There is hope, however, as we learn that the mature teacher Elizabeth was herself once an abandoned teenager yet has managed to survive and work in an environment designed to help others.

At a hotel restaurant a married man with a new set of twins is dining alone. Waiting for his supper to arrive he phones his wife, who surprisingly brings up their recent difficulties related to the absence of intimacy. Soon thereafter a beautiful woman enters the restaurant and asks to sit with him; it is clear he is married and all the male gazes are fixated on her. Soon he is aware she might be flirting with him, and a battle between his needs and his love ensues. "Room 307" takes its time to build up and appears directionless at times. Clear, concrete writing, however, keeps the reader in the story to discover a piece about relationships, primary needs and the notion of selflessness.

New private school English instructor Linus is having some difficulty coping, not with his class but with the consequences of the recent Casual Friday dress code the female students are abusing. We discover, however, that Linus's coping lies beyond the mundane tribulations of a high school teacher, that he has always been coping, with women and with life. The one person he feels who can, in a sense, save him, or give him some kind of purpose, is the seemingly non-conformist student Amanda. However, just like any sixteen year-old, and despite her maturity, keen sensitivity and bright future, she is nonetheless caught up with being a teenager, and Linus's focus becomes utterly misguided. The highly social conscious teenagers are clearly beyond Linus's understanding, and his unconventional yet accidental approach to his class's curiosity costs him a good deal.

A very fine story with strong character delineations, it quickly grasps my vote for best story of this issue. At times comedic, the story borders on the tragic, illuminating the very real hyperbolic misunderstandings between generations and between students and instructors. More than that, however, the story is about an outcast in a world that has rejected him, and his tragic inability to find an appropriate way to return.

Martin is a former printing press worker who, after an accident at the plant that cost him his left arm, lives in a small cottage writing poetry. Bad poetry. Verse upon verse of bad poetry. About love and daffodils and sunrises and such. He meets a heartbroken Connecticut traveller at the local pub, and will soon come to an unfortunate awakening. The bad poetry is hilarious, but the story loses a little with some of its own weak, abstract prose, such as "Details begin to float into position about her face, like strokes of water colour adding definition to her presence." According to his bio, Corrigan, a filmmaker, is hoping to translate "The Romantic" into a short film. I'd be curious to see it.

A high school official explains how he went to great lengths to maintain student enrollment. I have never been a fan of stories that act as semi-comedic rants, or of any kind of ranting, so this one isn't for me. There were a couple of amusing moments, but to me it's a question of style and approach, and this is one approach I can do without.

Recently separated Charlie now spends his free Saturday evenings with his former mother-in-law "Glenda," a boisterous woman he can only picture in quotation marks. Oddly though, their relationship is evolving rather positively, and Charlie realizes he's beginning to look forward to her visits. While I often claim stories should be shorter, I wanted this one to be longer and to follow the progress of character and relationship evolution. The story is a good combination of drama and humour with great character focus.

Little Tonya wants to "get on green" today; essentially to get onto the positive roster at school. But good behaviour doesn't come naturally to her, and the pressures of adult expectations and her mother's struggles have their adverse effects. A great read, surprisingly touching with a good mix of the hopeful and the defeated.