The Erasers at Goodreads
Rating: 8/10 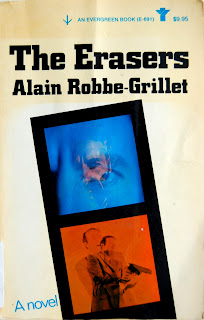 "Sometimes you go through hell and high water to find a murderer, and the crime hasn't even been committed."

Perhaps the most notable member of the group of experimental authors practicing the tenets of the Nouveau Roman (New Novel), Alain Robbe-Grillet's first novel is a fascinating, fun and frustrating murder mystery. It deals with a detective by the name of Wallas who is sent to an unnamed town to investigate the murder of Economics Professor Daniel Dupont. The murder is believed to be linked to a series of eight other murders occurring across the country over the past eight days, each at precisely 7:30 P.M. What's different about this particular murder is that there is no body, and moreover, unknown to Wallas but revealed early to the reader, is that Dupont is in fact not dead.

There are many wonderful aspects to this novel. The setting itself is incredibly well designed, and the nameless town becomes a familiar geography. Characters are colourful, at times comical and often pathetic, like the detective Wallas who is cursed with poor phrenological features which he suspects are linked to his constant failings, while he roams the streets almost at a loss as to how to investigate. The premise that his career is to be judged on the merits of whether or not he can solve a murder that never happened is masterful tragic irony. His fate is perfectly summed up by the fact that he regularly pauses in his investigations to search for a pencil eraser that he remembers well but that may not even exist. Erasers are plentiful throughout the novel, from the pencil erasers to more subtle suggestions, such as pervasive forgetfulness, changing or replacing facts and even actual events, along with the conspiracies that these nine murders were part of a series of hits conducted by hit-men, or "erasers."

The novel contains a number of recurring elements, from notions of duality to the idea that everything and everyone is mirrored. Wallas has an uncanny resemblance to the main suspect in this case, and is constantly being mistaken for that other, shadowy individual. People and objects have their twins and their alternates, as do events which are constantly repeating themselves. It is almost as though  the novel is only one link from a never-ending cycle. The bar that opens and closes the novel is described as an aquarium, so that all its inhabitants are fish living in a glass bowl, swimming around in eternal circles.

What is frustrating about The Erasers is the need for patience, particularly during the earlier pages. This is not a novel that can be read in bits and spurts; I became wholly immersed when I blocked out the world and sat reading for several hours without interruption. I don't always have the time (or the discipline) for such intensive reading, but with Robbe-Grillet I found it to be a rewarding necessity.