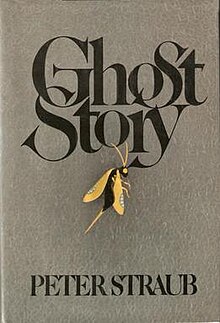 The first three quarters is taut prose, excellent character-building alongside a suspenseful plot: a mystery with some element of the supernatural. The next portion elevates the supernatural, as our characters choose to battle against evil forces. The final portion is exaggerated, a great climactic explosion while, for the most part, the characters have stopped evolving and, as they go all out against evil forces, threaten to become sentimental.

My reading pattern sees me glued to that first portion, interested still during the second, and unfortunately (but not always), disappointed by the finale. This was the case with Floating Dragon, which was proving to be my favourite Straub until that finish, and Shadowland which I read too long ago to truly reflect on. An exception is Mr. X, which despite some exaggerated fantastical elements, held me throughout, particularly as a result of its complexity.

While Ghost Story does follow this pattern, neither the fantasy nor the end are too outlandish, and the novel holds up well from start to finish.

Though a celebrated genre writer, Straub is foremost a stylist. His writing is patient and conscious of language. Atop this, his delineation of character is excellent, and makes the horror elements of his work truly threatening, in that we are interested in the people caught up in the tensions of his universe. Had the townsfolk of Milburn been generic slasher victims, we just wouldn't care much about them, and rather than sympathize with their situation, we may even root for evil. In addition to strong characters, and unifying those characters, is the character of the fictional town of Milburn, New York. The geography is among the best captured in a novel, elevating the basic function of setting.

Five elderly men of Milburn make up the Chowder Society, gathering regularly to share ghost stories. A year ago one of the men died, and now a second has also fallen victim to unusual circumstances. These men are strongly linked to one another, to their town, past, and through the malevolence of the woman hunting them down. Linked also to the folk tales that come full circle with their storytelling, and the title is only a representation of something greater, so that an arguably more appropriate title would be Creepy Folk Tales. The idea is that the evils our minds have conjured up in our folk years, in the form of ghosts and werewolves and vampires and changelings and the rest, are the result of a single malevolence that appears sporadically through time to wreak havoc in any given part of the world. In this novel that malevolence is seeking vengeance.

A truly fascinating concept. Interestingly, my attention was absorbed by the character relationships and the town, more even than by the evil spirit. It is as though the novel is primarily centred on these relationships, and the malevolence is introduced as an obstacle to test the relationships, like a death or a divorce or a car accident. Will these good folks pull through and overcome this situation? In all honesty, I would be intrigued by a Straub novel focusing on relationships with no element whatsoever of the supernatural. But he appears to have retired from writing. 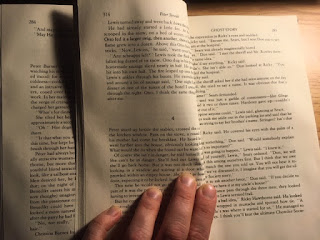 On a side note, my copy contains one unusual printing error. Several pages repeat themselves: when you come across page 314, you can turn to page 283, and make your way back up the repeated thirty pages. I have the first edition but not sure which printing, and I wonder how much those thirty pages multiplied by the number of copies printed, cost the publisher (or printer). (Or forest.)