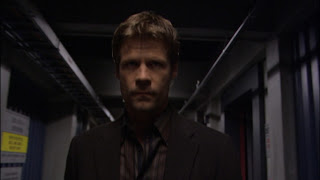 An evil-looking Tom Baldwin walks into an interrogation room and shoots an evil-looking TJ Kim twice in the head, which reminds me of the wonderful Police Squad! episode with the shooting of Mr. Twice ("So you shot Twice." "No, I only shot once."). In this case Baldwin did shoot twice (but not Twice), yet the evil-looking Baldwin wasn't Baldwin, but a kid named Boyd Gelder (Sean Marquette), who isn't evil-looking at all.

There are two obvious problems with the main plot of this episode: it fulfills expectations of a familiar idea, and it offers us a threatening situation that is presented as less than threatening. 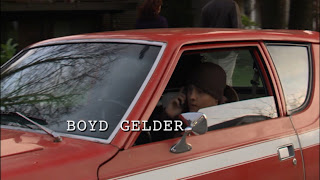 Introducing Boyd Gelder (disappeared 3 March 2000), chameleon 4400, yet another X-Men character imitation, namely Mystique, only less attractive. More importantly, though, Gelder lacks the overall appeal of Mystique: he is not presented as terrifying or even sinister. The innocence of the youthful character, while potentially intriguing, doesn't face up to the threatening allure of other 4400s such as TJ Kim or Isabelle. It also doesn't help that his youthful angst is delivered through the older body of Tom. Regardless of his power, Gelder comes across as just another confused teenager more than he does as a threat to NTAC's investigations and, ultimately, the world. There is so far little back-story: we're informed he volunteered and was not recruited, but how he learned of the existence of the Nova group is information withheld. The fact that he comes from a clean home adds little to the threatening factor. If Gelder were a broken teen with nothing to lose I would bye into the dangerous renegade chameleon, but he's presented to us as less wolf and more pussycat. 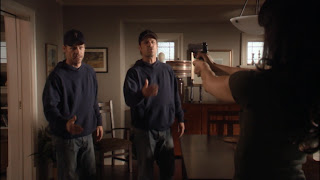 The impostor idea is nothing new. As an idea it remains intriguing since the notion of being imitated and made to do things we wouldn't normally do is unavoidably terrifying. "Being Tom Baldwin" (nothing like the superb Being John Malkovich), despite its strong premise, succumbs to the pattern of the expected. The viewer knows early on who and what is behind the Baldwin-not-Baldwin conspiracy, so the nature of the threat is not a mystery for long. Once the characters catch up with the viewer and know what they're dealing with, the lead's loved one is threatened, the partner is also mimicked along with a close colleague, and of course the climactic showdown, as I expected within the episodes first few frames, features lover Alana pointing a gun at the two Toms, not knowing which one to shoot. If it were me, I'd have shot Twice. 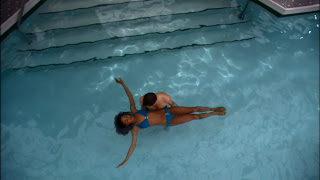 Isabelle wants to learn things, to catch up on all the standard life events that she missed out on by suddenly becoming almost twenty. These activities include swimming, driving and fornication. Shawn is there to help, at least with the first two. It's obvious feelings are brewing, at least in the physical department. I would expect someone as conscientious as Richard would want to take his little big girl under his wing and teach her the things parents teach their children, but he's on a journey to bury Lily's ashes, conveniently out of the way for just long enough for the youngsters to shed some clothing. Considering the responsibilities of fatherhood, complicated as they are with Isabelle, Lily's ashes could wait a few weeks, and I think Lily would agree. Matthew, on the other hand, seems to be urging Isabelle to lust after Shawn, and I wonder if the union will produce an uber evil 4400 spawn.

As much as I believe Mahershala Ali is the most talented actor in the series, I was left cold with Richard depositing Lily's ashes at his former Lily's gravestone. It's not Richerd, however, that leaves me cold, but the simple fact that I don't miss Lily much and her loss is a benefit to the show. I did like older Lily Tippi Hedren quite a bit though, but there's only so much the writers could do with such a character, unless they give her a truly unusual ability, like free health care. 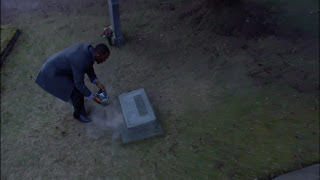 Briefly the Dr. Burkhoff plot progresses, and we learn that he is increasing his doses of promicin as he is actually developing a 4400 ability, a kind of instant healing. Some nice humour is thrown into the scene:

Some more humour sneaks in when Diane sees and chases herself (Boyd Gelder, really), and later says to Tom, "I don't really run like that, do I?" 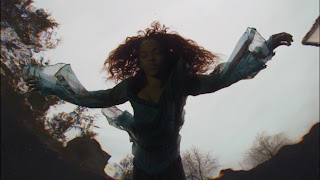 Flaws continue to abound as season three progresses. When fake Tom is looking out of real Tom's window, a crew member is moving about in the kitchen, taking a seat it would appear. This movement attracts our attention and it's difficult to miss the flaw. The episode also features a number of minor continuity errors, some generic dialogue ("It's the least we can do for him!")