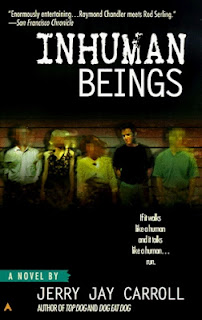 Cynical noir-type detective Goodwin Armstrong is approached by professional psychic Princess Dulay who claims that aliens are attempting to take over the Earth. Since the private detecting field has been experiencing difficult economic struggles of late, particularly with Security Concerns nabbing up most of San Francisco's clientele, Armstrong accepts the princess's case when she offers him an astonishing salary. As expected, there is some truth to the psychic's claim, and Armstrong is soon enmeshed in an interstellar conspiracy.

After having released three novels in three years, author Carroll limited his publishing to columns and I'm curious as to why. Inhuman Beings is an entertaining read, providing a good mystery, humour and some tight genre writing. The plot adds little to either the Body Snatchers concept, or to the investigative mystery/science fiction hybrid, but nonetheless delivers a read-worthy novel.

Structurally the novel is organized as a kind of triptych. It is patterned across three distinct parts: the investigative, the fugitive and the apocalyptic. The first segment features our cynical hero investigating strange occurrences while protecting his psychic client; the second follows Armstrong as he is simultaneously fleeing and pursuing the aliens, while the last third has him among a band of government officials in a desperate attempt to deal a final blow that would rid the earth of its unwanted and hostile guests.

My favourite third is the investigative, as it best blends its separate genres and provides the most entertaining narrative. Narrator Armstrong reveals that the detecting profession isn't glamourous, nothing like what you see in the movies, and yet proceeds to act like a 1940s noir detective. Aside from this bit of nifty irony is the fact the dame that walks in to hire him, a conventional noir trope, is not the stunning, curvaceous and sultry cigarette-smoking babe we would expect from noir mysteries, but an overweight psychic. There is suspense during the mystery's unravelling, even though the reader is fully aware that the aliens are real. Not only are we aware of this for there would be no book otherwise, but the cover declares: "If it walks like a human and talks like a human... run."

This is not to say that the rest of the book is a letdown. For one thing it would be inappropriate to maintain the humourous cynicism when our hero is running for his life, and the fugitive sequences feel fresh and maintain the excitement. It's also great to see our narrator become so self reliant and effect this process of change. The last portion is the novel's weakest, and by then I was ready for the conclusion, which offered little surprise. Armstrong sits back a little amid the collection of official and military personnel, and the narrative is becomes less detailed. Because it was the narrator himself who was so engaging throughout the first chunks of the work, having him settle back is not the most compelling way to bring the story to its end.

Despite the waning portion and the generic finish, the novel is vastly entertaining and a good addition (though nothing revolutionary) the mystery/science fiction genre.

What is also interesting in the novel is that we never really get to meet the aliens. Sure we encounter a few throughout the book, but they are constantly held at a distance, and we don't learn a thing about there origins or their culture, only that they are malevolent things with advanced electronic technology bent on taking over the Earth. It is not Carroll's aim to create a hard scientific or cultural analysis of another race or, inherently, of ourselves, but to deliver a science fiction mystery with elements of adventure. Therefore, because these creatures are kept at a distance, the threat itself is more ominous and untouchable.