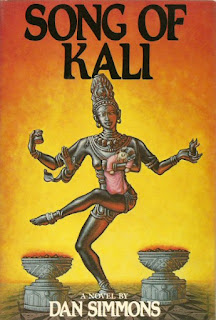 Set in bustling 1977 Calcutta, Song of Kali is the story of a sentimental American poet who travels with Indian wife Amrita and newborn child Victoria on a commission to locate a manuscript. Evidently the celebrated Calcuttan poet M. Das has resurfaced eight years after having disappeared without a trace, and has produced a new poetic saga about the goddess Kali.

It's difficult to discuss Song of Kali thoroughly without spoiling it, so I will touch upon some of the more impressive aspects of the novel without over-elaborating. The novel pits the notion that violence equates power against the abstract sentimental view that amid all crises there exists an element of hope. Simmons sets this battle amid the chaos of Calcutta, where idealistic poet Robert Luzcak struggles against the reality of ever present and pervading violence. Far from his serene and rural Massachusetts, he quickly rejects the world of Calcutta, wandering its streets and listening to its tales with disbelief. Yet Calcutta, like the goddess Kali that the city is named after, manages nonetheless to be seductive, and his return home is continually delayed as he becomes enmeshed in a conspiratorial plot involving a missing poet and the mysterious Cult of Kali. Luzcak's ideology of hope is particularly challenged when his infant daughter is endangered.

The novel succeeds not because it is a good story (which it most certainly is), or because it is well written (which it most certainly is) but because the story is well fused with Simmons's ideas. Though the struggle between the ideology of hope and the notion that violence equates power is not subtle, it doesn't need to be, allowing the reader to grasp the point quickly and focus on the plot, the disturbing sequences and the wonder that is Calcutta (and India in general). The novel weaves through Calcutta as it weaves through plot, constantly shifting and hence never growing dull. A hunt for a manuscript encompasses tales of body snatching, kidnappings and cult practices.

The novel's point of view is not limited to a westerner's experience of an eastern culture. Luzcak's Indian wife has strong views on Indian culture, and though she is westernized, she does offer a strong balance to our protagonist's growing wonder and frequent periods of inaction. Song of Kali also includes a lengthy narrative by an Indian student's own experience in his country. His experience is heavily laden with the supernatural, yet it also invokes the experience of caste and the reality of the untouchable. This lengthy narrative is my favourite sequence in the novel, as two Indian men search for a corpse as an offering to the goddess Kali. Though morbid and telling of India's darker difficulties, the sequence manages to be comical amid the exaggerated though very real bureaucratic system. This sequence delivers truly engaging story-telling. 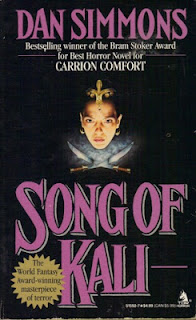 As a side note there is an interesting reference to a popular 1980s horror author: "I had never even been able to interest her in the trashy Stephen King novels I would bring to the beach each summer." (52) Is Simmons poking fun at himself as another genre author, or elevating himself beyond the confines of mainstream horror-fantasy? Likely the latter since the novel is his first, and in a decade rampant with King imitators, he would want to separate himself from that phenomena. Though this is my first Simmons novel and I am no expert on the works of King, in my opinion Simmons is rungs above King in terms of literary consciousness, proving that modern genre writing works best when invoking very real human conflict and pitting diverse ideas together. It isn't about being scary or about being gory, since perhaps the greatest possible horror is the complexity of modern existence.

Song of Kali was awarded the 1986 World Fantasy Award for Best Novel, placed sixteenth on the Locus Poll Award for Best First Novel, and was included in the Stephen Jones and Kim Newman publication Horror: 100 Best Books (1988).


For other Friday's Forgotten Books, please visit Patti Abbott's blog.
Posted by Casual Debris at 12:44 AM

A must read! Awesome review!

An impressive start & an impressive read. Both for genre & literary fiction. Thank you both for your comments.