Arthur Conan Doyle, The Hound of the Baskervilles (1902) 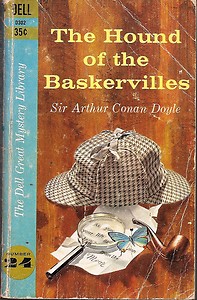 While I did enjoy the Sherlock Holmes short stories and various movie and television productions as a kid, I managed to miss out on the longer works. This missing out continued into my adult years despite an old and slightly tattered Dell edition of The Hound of the Baskervilles sitting on one of my many "to read soon" piles (notably the to be read soonest of the soon piles). More impressive is that I still knew nothing of the popular novel's plot, and it wasn't until I was on page sixty-nine of Mark Haddon's The Curious Incident of the Dog in the Night-Time that I pulled Baskervilles from the upper middle of point of its pile. In his 2003 novel, Haddon does a bit of deconstruction with Baskervilles, nothing revolutionary but nonetheless reveals the main aspects of Doyle's book. Just as Haddon's narrator begins his analysis, I began the novel.

Baskervilles is a detective novel that is deeply embedded in western popular culture. It has been repeatedly filmed across a range of styles, and with a wide range of distinct interpretations of the popular Holmes, including those of Jeremy Brett, Peter Cushing, Basil Rathbone and Peter Cook (even the voice of Peter O'Toole). The book even lent its title to a medical study, "The Hound of the Baskervilles effect," whose objective reads in the US National Library of Medicine: "To determine whether cardiac mortality is abnormally high on days considered unlucky: Chinese and Japanese people consider the number 4 unlucky, white Americans do not." As part of Sherlock Holmes lore, the work is a return to the character by its author following an eight-year absence, as well as following Holmes's death in the short story "The Final Problem" (1893). As fiction it's an early example of the detective novel, featuring a variety of both distinct and subtle clues and red herrings, as well as withheld information and false inventions that modern mystery authors and readers tend to get irritated by. More on this shortly. It also plays a part in popular contemporary fiction, deconstructed in Mark Haddon's The Curious Incident of the Dog in the Night-Time.

In brief, the novel involves the death of kindly Baronet Sir Charles Baskerville from a heart attack believed to have been brought on by the legendary Baskerville Hound. In the Devonshire moors (Dartmoor), this creature is believed to be part of the Baskerville family curse which, without going into too much detail (you've probably already read the book or seen a filmed version), involves a mean old ancestor and a hell-hound that has returned to wipe out the family line. In light of this curse the only remaining heir, Sir Henry Baskerville is in danger.

The novel holds up due primarily to its complication rather than its premise or resolution. The premise itself is interesting enough, yet as soon as we leave the Holmes home on Baker Street we are confronted with a variety of events and details which make for an entertaining and suspenseful read. The red herrings work well, and I honestly couldn't tell if the hound would be real or not, though I did figure out a major aspect of the mystery early on, while being surprised by others.

The book is also populated by varied characters, though I would have preferred to read more of the despicable yet entertaining lawyer Mr. Frankland. Sir Henry is from Canada, and I like reading about Canadians in non-Canadian novels (though I do get nervous when they are in danger).

The problem lies in the resolution (I will be vague enough not to spoil the story). Modern readers will note that Doyle cheats quite a bit in the novel, since aspects of the crime are either revealed in the last two chapters (the sudden introduction of a character who played some part, though small), some detail withheld from the reader (though since it was consciously withheld from narrator Dr. John Watson this can, I suppose, be excused) and a major detail that Doyle doesn't even attempt to resolve, essentially how would the criminal get away with collecting the Baskerville estate after eliminating the known heirs? Perhaps one of the films attempts to approach this issue.

We are of course in the calendar year of 2012 (the world still intact, I'm happy to point out), a long way from 1901/02, and the novel as well as the mystery has evolved considerably. Doyle's stories featuring Holmes, as well as other early nineteenth century mysteries employing unfair techniques, are nonetheless quite enjoyable, and do feature great mystery concepts, as the hound does in Baskervilles.

Email ThisBlogThis!Share to TwitterShare to FacebookShare to Pinterest
Casual Labels: Doyle Sir Arthur Conan, Hound of the Baskervilles The