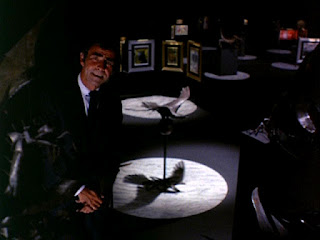 The Halloween episode, so we'd think by its date, features traditional horror fare, with its haunted house and its vampires. The narratives themselves are also a little traditional, and while the first has some fun tossing in some twists among its standard tropes, the second is predictable and flat.

In neither segment does Rod Serling dip his writing talents. 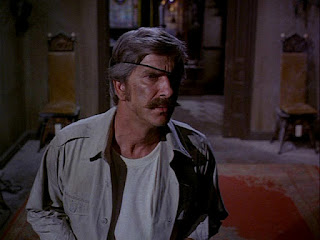 "The World is divided between those with courage and those without."

Colonel Dennis Malloy has no patience for the weak. Having lived through countless battles, facing death head-on and having killed men with his bare hands, he considers himself to be the epitome of bravery. The wealthy Dr. Mazi, on the other hand, isn't ashamed to share his tale of a haunted house experience that turned his hair white overnight. When Malloy ridicules Mazi at their club, the doctor bets the colonel ten thousand dollars that he cannot stay at that house, which Mazi still owns, for one whole night without feeling fear. The colonel accepts, partly for the money and partly because it would've otherwise been a pointless and very short episode.

Malloy arrives at the house and searches its rooms. There are thick spiderwebs housing large spiders, candles that blow out by themselves, maniacal laughing bright and glittery ghost heads, spontaneously dripping blood, fiery piano-playing uniformed figures, a strange streaky substance in the basement... a whole mess of things. Malloy remains level-headed and only a little jumpy, discovering soon enough that the strange occurrences are manufactured. But why would Mazi spend so much money for such an elaborate gag, he wonders. Malloy comes across a clean and tidy bedroom with a lit fireplace and a comfortable bed, and gratefully settles down for the night after cutting the electrical chord he finds underneath the bed. In bed a cage wraps around him as a swinging blade descends toward his neck. Afraid at first, he calls out to Mazi knowing the other wouldn't commit cold-blooded murder, and the blade stops.

[Spoilers] The following morning Malloy awakens refreshed, and finds breakfast waiting in the kitchen, as well as a monitor on which Mazi appears, his hair no longer white. An elaborate gag indeed, and Malloy has proven himself brave without comparison. But Mazi has something else under his sleeve, involving that slimy streak we encountered earlier in the basement. He convinces Malloy there is a horrible creature in the basement, and the colonel blows his brains out, after which Mazi announces that it was all a lie. The end. 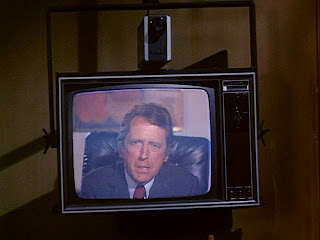 Somewhat disappointing on one level, perhaps, as there is a certain anticlimactic quality to Mazi's final announcement. Yet this is a battle between two strong characters, and the real point being addressed here is that the doctor defeats the colonel, as he has frightened the eternal survivor Malloy to such an extreme that he takes his own life. There is a lack of satisfaction in that Malloy will never know he was tricked, though by taking his life he is admitting defeat. In addition, Malloy is outed as a horrible tyrant and war-time murderer by Mazi, so that this not a case of an arrogant man getting more than he deserves, but a murderer being dealt with outside the confines of the law.

An enjoyable and suspenseful little play, it is also highly watchable with the pairing of Leslie Nielsen and Fritz Weaver. Some of the props don't quite work, as with Malloy's obviously fake eyepatch, the rubber spider dangling on the spiderweb that Malloy first tears asunder, and the mechanical dummy piano player who is obviously a real man. While these do add a certain charm to the 1970s set, they really could have done away with that silly and pointless disco ghost head.

Leslie Nielsen does a surprisingly good job as the crusty colonel, though the role was likely imagined for a slightly older actor with more military experience. I won't list Nielsen's anthology history as he's appeared in nearly everything, including both Alfred Hitchcock Presents and The Alfred Hitchcock Hour, as well as Naked City, Thriller and several episodes of Tales of Tomorrow and Suspense (1949). This is Nielsen's second of two appearances on Night Gallery; he was in the first season segment "The Phantom of What?" Surprisingly Nielsen never appeared on The Twilight Zone, though his presence was implied in many episodes since the show re-used several props built for Nielsen's big screen adventure, Forbidden Planet. Fritz Weaver is very well cast as the methodical and utterly wealthy Dr. Mazi. Like Nielsen he has appeared in numerous anthology series, including two for Tales from the Darkside: "Inside the Closet" (1.7) "Comet Watch" (2.13). Unlike Nielsen he appeared in two The Twilight Zone episodes, both of them remarkable: "Third from the Sun" (1.14) and "The Obsolete Man" (2.29). Both actors appear in different segments of the enjoyable 1982 anthology movie Creepshow. 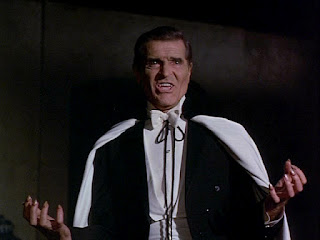 A Nazi commander leads his troops to rest and food at a tiny isolated village. General von Grunn wants more than food though, as he is convinced that the village is home to a dangerous resistance group. Our host, Dracula, along with his servants, are kind and passive toward the visiting Nazis, and remain overly hospitable as the clock's hand is approaching midnight.

I found this episode drab and predictable. The narrative frame of Dracula years later (in 1971, I presume) telling the tale to his grandson, adds little to the teleplay. Essentially produced so that Francis Lederer can reprise his role as Dracula from the 1958 movie, The Return of Dracula, which though a commercial failure upon its release, was by 1971 elevated to cult status by horror enthusiasts. This was Lederer's final screen role, according to IMDb.

Austrian actor Helmut Dantine was an active anti-Nazi activist whose parents perished in a concentration camp. Though Austrian he portrayed many fascist Nazis throughout his career. He is best known as the naive young gambler in Casablanca, and has appeared in many early anthology series.
Posted by Casual Debris at 10:42 PM

He was supposed to, but after having a bad experience with cinematographer "Curly" Lindon on another episode, he withdrew from this one. Jack Laird is credited on screen, and the book seems to indicate that he actually did the job.

Interviews with Flicker and John Astin (who appeared in the episode Flicker did direct, "Hell's Bells") are my source, from the big Night Gallery book (whose actual title and authors I can't call to mind right now).

The Flicker was an error on my part as Laird did actually receive credit.

No I don't have the book; thanks again for the tidbits.

The big book I'm using is the Scott Skelton-Jim Benson Rod Serling's Night Gallery: An After-Hours Tour; it's not just handsome-looking, it's also extensively sourced, with many interviews with actors, directors, writers, and other participants in the making of the episodes.
Also an education in how US commercial television operated in the early 70s (not quite the same as today, but US-TV has always been a volatile business, and no less fascinating for that).
You mentioned in your first Night Gallery post that you were thinking of getting this book; I assure that it's worth whatever you'll pay for it.