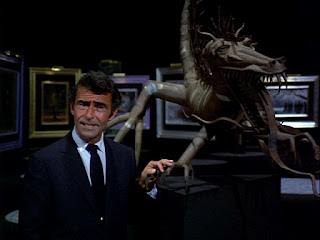 Episode 2.4 features three segments along with one terrible comedic sketch. Each of the segments are good, though none are outstanding. None are original teleplays but based on short stories by Elizabeth Walter, Joan Aiken and David Ely respectively. It appears that Mr. Rod Serling was a fan of the Christine Bernard edited Fontana anthologies, since all three of these stories were included in the first three books of the popular series, The Fontana Book of Great Horror Stories. These Fontana books included mainly reprints with a few originals, and Walter's "The Spider" was among the originals, first published in the second volume (1967). Joan Aiken's "Marmalade Wine" was reprinted in the first (1966), and David Ely's "The Academy" was included in the third (1968), a book I read back in my teens in the 1980s, introducing me to the fine series. All but "Marmalade Wine" were adapted by Serling, and though the producers of Night Gallery tried to keep Serling at a distance, he likely had a say in the stories adapted for the actual segments. 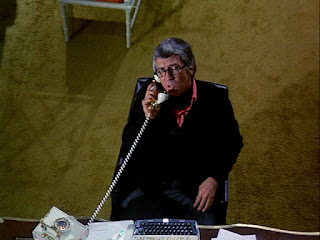 A Fear of Spiders
Directed by John Astin
Written by Rod Serling from a short story "The Spider" by Elizabeth Walter
Starring Patrick O'Neal, Kim Stanley and Tom Pedi


Elizabeth Walter, "The Spider"
Food and design columnist Justus Walters is an arrogant and self-interested bachelor who has a deathly fear of spiders. He cruelly tosses aside the advances of his romantically inclined upstairs neighbour Elizabeth Croft, but when he sees large spiders in his apartment, he quickly seeks out her company. This getting what he deserves (and more) story is predictable, sure, but it's well crafted and a pleasure to watch.

What is great about "A Fear of Spiders" is that there are hardly any spiders to be seen. What few spiders there are might not even be there, but exist in Justus's overwrought imagination. Our columnist is a fussy and compulsive man. Everything in his apartment is in its proper place and when he works he must have absolute silence, so that even a dripping faucet is too much for him to bear. When he deals with the drip he wipes the sink with a cloth, implying that the water sitting there would also drive him to distraction. Everything must be in its proper place. "I have three columns to write!" he yells at Elizabeth when she comes to his door, but it's likely he'd find distraction even when none is around. The fear of spiders acts as a manifestation for his fear of people, and he treats everyone around him with blunt cruelty, expecting to be left alone and in control of his environment. The building maintenance man appears in a small part to show that it is not only Elizabeth who Justus looks down upon, but pretty everyone other than himself. 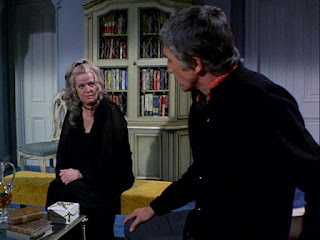 If you were paying attention you might have noticed that the main characters' names are borrowed from those of the short story author: Elizabeth Walter broken into Justus Walters and Elizabeth Croft. Both Patrick O'Neal and Kim Stanley do a great job in their roles, and both work well with Serling's wordy yet playful script. Like many of his generation, character actor O'Neal has appeared in many anthology series, including each of the four excellent series The Twilight Zone, The Alfred Hitchcock Hour, Naked City and The Outer Limits. Stanley was primarily a stage actress and an great choice for the role, and though she hasn't appeared in many screen projects she has had many memorable roles, including the narration for To Kill a Mockingbird.

Some good directing and editing, including a smart decision to show the big spider for only an instant. I admit I jumped a little when I saw it even though it's clearly a large teddy spider. Director veteran and prolific actor John Astin, who directed three segments of Night Gallery ("The House," "A Fear of Spiders," "The Dark Boy") and starred in three as well ("Pamela's Voice," second episode coming up, "The Girl with the Hungry Eyes"). 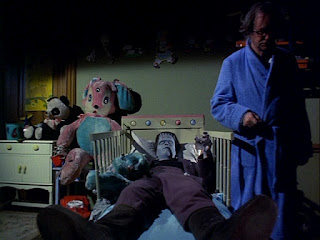 These second season comedic sketches seem to get worse with each episode. In this one a couple is asleep as we hear a child's voice calling out to daddy for a glass of water. Daddy looks over to mommy who says, "He's your child," so daddy gets out of bed and brings Junior a glass of water. The child turns out to be Dr. Frankenstein's monster lying in a partially assembled crib, or one of those cribs that can extend into a bed. Junior thanks daddy and then, as the camera closes in for a close-up of the classic Frankenstein monster make-up, Junior pours the water over his forehead. This, I think, we're supposed to find funny, which leads me to think that Jack Laird considered his audience to be made up of dimwitted folk with poor attention spans.

The role of the father is played by versatile actor Wally Cox. Unknown Barbara Flicker is likely related to director Theodore J. Flicker, co-creator of the wonderful Barney Miller. 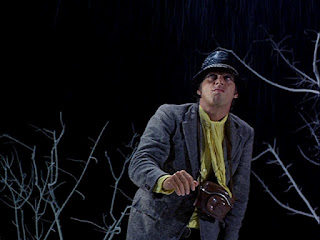 
Joan Aiken, "Marmalade Wine"
Based on a short story by Joan Aiken, daughter of Conrad Aiken, "Marmalade Wine" is a simple tongue-in-cheek tale of coincidences with a surprise ending. The story was well conceived by writer director Jerrold Freedman (assuming he was behind the filming concept). Photographer Roger Blacker is caught in the middle of nowhere in the middle of a rainstorm, and is brought into the dry home of Dr. Francis Deeking. The two men chat over some home brewed marmalade wine, and we learn that Blacker has the knack of accurately predicting the future, while famous surgeon Dr. Deeking recently moved out here away from civilization because... but Blacker can't seem to recall exactly why, though it's been in the news. 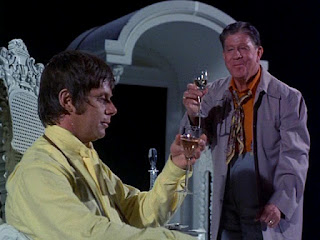 The story is not remarkable nor terribly memorable, but the episode is pieced together with some odd humour and minimalist sets that make it a pleasure to watch. The actors appear clown-like in their roles, with exaggerated movements and facial features. We first encounter Blacker as he's stumbling along a forest path, slippery with rain, fumbling and tumbling until Deeking appears above through a window. The set is minimalist, shot in a studio with a black backdrop and resembling something put together quickly for a high school play, with white cut-out trees that re-appear continuously as Blacker is running, reminiscent of The Flintstones assembly belt backdrops. The interior of Deeking's home is just as minimalist, with walls borders yet no walls and simple white furnishings. There is no pretense here as crew and actors are having fun with the staging, and we can even see Deeking through the wall before he comes through the door. All of this adds a sense of story-book surrealism, so we accept huge coincidences and obvious dialogue such as Blacker wondering aloud: "Now what was it recently read about Dr. Deeking? It was in all the papers."

Written and directed by Jerrold Freedman, who was behind the camera for six Night Gallery segments, including the good "Room with a View" and the bad "The Flip Side of Satan" (the others I haven't yet reviewed). Blacker is played by Robert Morse, currently on Mad Men but previously appeared on twice on Alfred Hitchcock Presents, Naked City, Tales of the Unexpected and the 1980s The Twilight Zone. Established entertainer Rudy Vallee's was primarily a musician and bandleader, and though he's appeared in many notable films and series, is best known for his musical contributions. 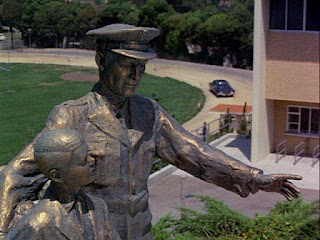 
David Ely, "The Academy"
Mr. Holston visits the director of the academy thinking it is a good place for his troubled and troublesome son. Holston is a busy man, a single father, whose son seems to be a bit of a problem child. The academy, on the other hand, is a military-style institution where discipline and respect for authority are integral daily rituals. Yet as Holston receives a tour of the facilities it appears that the cadets are a little older than he'd expected. 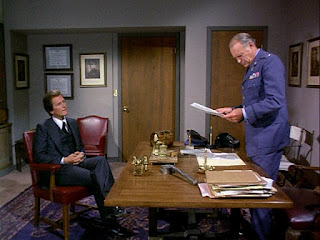 David Ely's "The Academy" is a difficult story to pull off, and yet Night Gallery manages to produce a good (though not excellent) adaptation. In his script Serling removes an integral level of irony by making Holston aware of what is going on, and conspiring nonetheless against the better interests of his son. Not only does this make the story possible for a televised adaptation since we must actually see the cadets, it also adds a commentary on the values of modern man, as we would rather pay to have our problems hidden away than be burdened by them amid our busy professional lives. Even if this problem is our very own child. Serling could have had the cadets appear hidden, as the medical staff were left in the dark throughout the memorable The Twilight Zone episode "Eye of the Beholder," but here, in full daytime colour, it would appear far too obvious and cheap.

Author David Ely's most anthologized story, he is best known for his novel Seconds which was filmed by John Frankenheimer in 1966. Holston is played by singer-songwriter Pat Boone, while the director is portrayed by long-time character actor Leif Erickson, who is to reappear in season three of Night Gallery for the episode "Something in the Woodwork." Erickson has been in a number of great films, while on television he's appeared primarily in westerns. He was featured in numerous dramatic anthology programs in the 1950s, as well as four times in Climax!, once in Alfred Hitchcock Presents ("The Equalizer") and twice on The Alfred Hitchcock Hour ("Consider Her Ways" and "The Monkey's Paw: A Retelling"). Oddly, unlike many of his contemporaries and many established actors who have had a turn on Night Gallery, he did not appear in Naked City. You might also recognize, in a small part as Cadet Sloane, Larry Linville, best known as Major Frank Burns on the once extremely popular M*A*S*H.

Posted by Casual Debris at 1:50 PM

"Marmalade Wine" got some notice when it first aired, as a reunion of Robert Morse and Rudy Vallee.
About ten years earlier, Morse and Vallee starred together on Broadway in the original production of How To Succeed In Business Without Really Trying. They repeated their roles some years later in the movie version, and remained social friends throughout.

Always glad to have your additional input Mike. This is all before my time (including Night Gallery) & the only reason I know anything about early cinema & television is thanks to my dear mom.