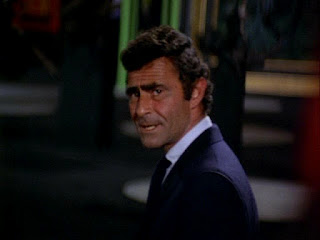 Episode 2.5 features only two dramatic segments and no silly comedy, which is probably the show's best possible format. But this episode's real strength is its second segment, a brilliant little film which features Orson Welles narrating Gene Kearney's adaptation of Conrad Aiken's "Silent Snow, Secret Snow." A better first segment could have transformed this episode into perhaps the strongest of the series, but alas, the generic supernatural tale of ghosts and werewolves is much too generic.

The episode presents us with an interesting David Carradine connection, which isn't surprising for an actor with so many roles over so many decades.. The actor appears in "The Phantom Farmhouse" segment, yet has ties with two actors in the "Silent Snow, Secret Snow." Radames Pera appeared alongside Carradine in the popular series Kung Fu, while Lonny Chapman appeared alongside the actor Carradine's first of two The Alfred Hitchcock Hour episode, "Ten Minuntes from Now." Meanwhile, David McCallum, the lead in "The Phantom Farmhouse," was a lead on the popular series The Man from U.N.C.L.E., in which his "Phantom" co-star Linda Marsh and Jason Wingreen from "Silent Snow, Secret Snow" both guest-starred, the latter in four different episodes. 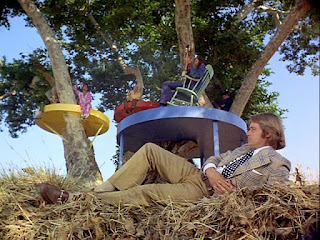 At an isolated psychiatric institution, psychiatrist Joel Winter (David McCallum) gets involved with a fantastic tale of ghostly werewolves. After one of his patients is found torn to pieces, Winter discovers that rebellious patient Gideon (David Carradine) had sent the dead man to a set of ruins once belonging to a farmhouse. On his way to investigate, Winter finds the farmhouse erect, and moreover he finds it occupied by a young woman named Mildred Squire (Linda Marsh) and her two parents. Love and lychanthropy are eventually brought to an end through Mildred's self sacrifice and the help of the Good Book.

A standard tale, not too interesting or original, highly predictable, yet nonetheless well shot. There is an interesting visual contrast between colourful artificial sets and the sparsely forested dusty brown landscape of the institution and farmhouse. Unfortunately the supernatural aspect of the ghost-cum-werewolf tale is muddled, as we're not too sure whether we're watching a ghost tale or a werewolf tale. Moulding the two sub-genres is fine, only here it appears that these werewolves are made ghosts simply to allow the writers an easy resolution. The resolution is simplistic, tossing in a bible for good measure, so I suppose the exorcism reveals the creatures to be more ghost than werewolf. Along the way there is little suspense, and the protagonist is essentially a passive and impotent fella, who does little other than swoon over Mildred and do everything she tells him without an inkling of thought. But I guess that's true love, Hollywood style. 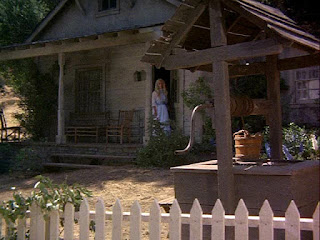 Mildred's long index finger (for werewolves in human form have an index finger longer than the middle) is ridiculous, since at first she is obviously bending her middle finger to make it appear shorter. Later, from a distance, the longer finger is clearly a fake, and the top knuckle unbendable, so that when even the middle knuckle bends the upper one remain impossibly straight. On the other hand the werewolf attack sequence is well edited, so that the cute pups actually do somewhat resemble ferocious rabid dogs (not exactly werewolves, who should be considerably larger, traditionally speaking).

Directed by Night Gallery regular Jeannot Szwarc. Glaswegian David McCallum who is good in the role of Winter. Best known for long stints on The Man from U.N.C.L.E. and NCIS, McCallum also appeared in several top-notch movies including The Great Escape. He hasn't figured much on anthology series, though he was in two episodes of the original The Outer Limits ("The Sixth Finger" & "The Forms of Things Unknown"), the 1980s Alfred Hitchcock Presents ("Murder Party") as well as in the second The Outer Limits ("Feasibility Study"). Linda Marsh was a secondary television actress who did guest star alongside McCallum on an episode of The Man from U.N.C.L.E.. Most notable cast member is the recently departed David Carradine. Familiar to many through countless roles, the eldest and most familiar of the Carradine brothers did appear twice on The Alfred Hitchcock Hour ("Ten Minutes from Now" & "Thou Still Unravished Bride"), and even on the terrible Spielberg produced Amazing Stories ("Thanksgiving"). Trina Parks is best known as the first African American Bond girl, in Diamonds Are Forever (1971). 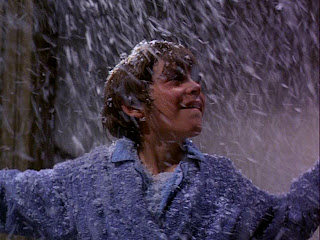 "Silent Snow, Secret Snow" is a little masterpiece of a film that depicts a young boy's withdrawal from the world, essentially his descent into an unnamed illness, perhaps schizophrenia, autism or asperger's. The segment is a reworking of a fabulous short film Kearney produced five years earlier, in 1966, only now with an actual budget. This version is almost as good as the original, with a few stronger points, and while I'd like to compare the two pieces, I'll refrain since this is a review of the Night Gallery teleplay.

One major coup managed by Night Gallery producers is nabbing the iconic Orson Welles to perform the narration. His tone and intonation are always excellent, and here Aiken's poetic prose flows beautifully off Welles's articulate tongue. Kearney's adaptation of Aiken's text is strong, and cleans up some of the rougher phrases from his earlier short film. The Aiken/Kearney prose is properly enhanced by the nice visuals; I particularly like the postman sequences. There is nothing visually fancy, but a nice set, good use of colour and light as well as strong support from a fitting musical score. A must-see which gets even better as I think about it. 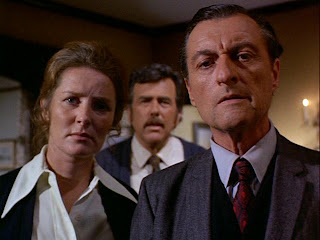 Adding to the technical aspects of the play there are some nice thematic touches. We watch a boy's world getting smaller and smaller, a reality contrasted by both a wider world as well as a narrower one, so the boy appears to have a choice between the two. He is learning geography in school, grasping ideas of the wide expansive world around us, and yet he carries with him a small snow globe, as though his own personal world is encapsulated in the tiniest of universes imaginable.

Kearney was one of the regular writer-directors on Night Gallery, producing a mix in work quality. The great Orson Welles needs no introduction, and hasn't appeared in any other notable anthology series. The boy Paul is played by Radames Pera who will go on to star alongside David Carradine in the successful series Kung Fu. The father is played by recognizable versatile character actor Lonny Chapman, who has appeared in numerous 1950s and 1960s anthology series, as well as Suspense (1950s) Naked City, The Alfred Hitchcock Hour ("Ten Minutes from Now") and Suspense (1960s). The mother is portrayed by Lisbeth Hush, who also appeared on The Alfred Hitchcock Hour ("Annabel"). Jason Wingreen who plays the doctor has a long series of anthology credits, including three appearances on each of The Twilight Zone ("A Stop at Willoughby," "The Midnight Sun," "The Bard") and The Outer Limits ("O.B.I.T.," "The Special One," "Expanding Human").