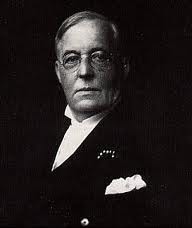 Learn more about M. R. James at these fine sites:

This article is a work in progress; I'll update it as I read the fiction. I am focusing on James's early "antiquarian" works. Please feel free to argue, amend, or simply contribute. Thank you for reading.

For a review of Ghost Stories of an Antiquary, please go here.

"There is a scholarly precision in the style, an academic reticence, which gives the various revelations a small whispering horror unequalled elsewhere." -- The Observer

That little blurb is in the inside cover of Penguin Books #91, the 1960 reprint of Montague Rhodes James's first published collection of short stories, Ghost Stories of an Antiquary (1904). Refreshing in contrast to the single-word blurbs that scream off the covers of today's paperbacks, but that's not what I want to write about.

Many do indeed consider James as "unequalled" in ghost-story craftsmanship, and there truly is a precision in his writing that adds a level of realism which the masterful Poe, in his Gothic glory, lacked. Yet unlike Poe the precision is not part of a careful, almost obsessive attention to technique; M. R. James was a practiced oral story-teller, and his written stories attempt to capture the oral quality of story-telling. This quality allowed James to digress a little with his descriptions and even on occasion toss out a bit of humour that may feel otherwise out of place, and certainly a breach of Poe's concept of unity of effect. Indeed, many of James's published stories were initially written to be recited to friends, and his early fiction publications, before the first Antiquary, were few and far between.

M. R. James published supernatural stories during a period of transition. In the latter nineteenth century and early twentieth, the supernatural tale was being overshadowed by more logical and scientific apparitions. The Victorians were well-practiced at poking fun at the pale-faced haunters of their predecessors, and superstars including Jane Austen (Northanger Abbey), Charles Dickens ("A Haunted House") and Oscar Wilde ("The Canterville Ghost") ridiculed the notion of risen spirits or simply stripped them of their haunting ways. Others, like Edward Bulwer-Lytton ("The Haunters and the Haunted") rationalized the notion of the supernatural and, while not scoffing at their existence, brought ghosts in line with the Victorian knack for rationalism. It was in the very late nineteenth century, when James was at work on his first collection, that supernatural beings were truly revolutionized, appearing in a more realistic, scientific mode. Prolific author H. G. Wells elevated the supernatural being from mere ghost or demon to a more modern, scientific-oriented creature. In his world men were made invisible via alchemical concoctions, monsters were the result of the horrific practice of vivisection, and demons accessed our physical realm not by crossing the borders of the grave but by crossing thousands of miles via solid mechanical objects or unusual beams of light. The notion of ancient spirits was being challenged by their modern variations.

Amid the new, modern and logical take on the haunted, James remained old fashioned. He dealt with small town spirits and the simple academic men who stumbled upon them during their research. There was nothing modern or revolutionary with the topics he dealt with, yet James succeeded in frightening his readers, as well as readers of this century, arguably better than any of his contemporary rationalists. Moreover, his blend of ghost story welcomed a long list of followers, and even today his name is often cited by authors as among the finest in the art of the ghost narrative.

The Jamesian style of scary story is quite specific, oral as well as antiquarian. As the title of his first collection, Ghost Stories of an Antiquary, suggests, James was a highly respected and active antiquarian. All of his early stories deal with the discovery or research of some medieval object, whether a manuscript, musical instrument or work of art. The ghosts in his stories are not always the standard prototypes of pale humanoid spectres, the dead revisiting the world of the living, wandering partially visible through rooms, howling and banging on doors. Instead they appear as demons ("Canon Alberic's Scrap-Book") or images cast on objects ("The Mezzotint"). Moreover the creature is not always haunting, but as in "The Mezzotint" is revealing the secret of a long-lost mystery, or in "Number 13" is just biding its existence only to have its form witnessed accidentally against a facing wall. The creatures were for the most part harmless and seemed to exist without consciousness, just hovered or appeared in its place. We can even argue that though James is considered among the greatest ghost story authors, he did not always write ghost stories. We can furthermore debate that Ghost Stories of an Antiquary didn't feature many ghost stories, and could have been titled Demons, Ghosts and Creature Stories of an Antiquary. No one, however, can successfully debate that the narrator of these stories wasn't an antiquarian, so that part of the title lives on without dispute.

Jamesian short story elements are straightforward. His protagonist is often "known" to the narrator, who is certainly James himself, a colleague or cousin who had related his haunting experiences to James at some time or another. This technique was not unique to James nor revolutionary at the turn of the century, but highly common during the nineteenth century and later. I've discussed this technique in other articles, and will mention it only briefly here. The narrator himself has not taken part in the supernatural events he is relating, yet someone he knows did, and hence the story gains the credibility of having actually happened, while simultaneously allowing the author/narrator the ability to distance himself from the events, should anyone want direct proof or accuse him of lunacy. The narrator can claim reality without having to be responsible for the strange events themselves. (Look at the multi-narrated Wuthering Heights, with its objective narrator re-telling a subjective narrator's version of the drama, while finally it's a little boy and his flock of sheep can "see" the ghosts on the Moors; who else to be believed but an innocent boy and his sheep?)

James's stories are often set in old English mansions, houses, inns or churches in little English towns. Some stories are set in academic settings, such as Cambridge, where James himself worked as provost at King's College (and later Eton). Some stories were set outside the United Kingdom, such as in France ("Canon Alberic's Scrap-Book"), Denmark ("Number 13") or Sweden ("Count Magnus"), where fictitious colleagues or acquaintances had experienced ghostly apparitions on their field research. These also often transpired in old mansions, houses, inns and churches or mausoleums.

For the most part the stories follow a basic premise: the antiquarian narrator tells of someone, a colleague or acquaintance or even of the experiences left behind in an old manuscript ("Count Magnus"), who had encountered a kind of ghost or demon through researching or handling some antiquarian object. Makes sense for an antiquarian to have come across such tales, so there was no need for James to change his approach. Most stories contain a truly creepy scene or moment, usually about half-way or three quarters of the way through the tale. The scare factor is never maintained throughout the tale, simply limited to the one scene or series of scenes, with the sole exception of "The Mezzotint" as we watch the ghost's progress. Supportive characters are simple folk, usually helpful to the protagonist, who often had at hand an ally or co-witness, whether a landlord, lawyer or valet, or someone else fairly trustworthy.

Protagonists are also straightforward people, uncomplicated by unusual backgrounds. They are usually academics, professors or researchers, often skeptical of the supernatural. An interesting deviation is the excellent "'Oh Whistle, and I'll Come to You, My Lad,'" which pays closer to attention to its protagonist, Cambridge Professor Parkins, who transforms from being an avid skeptic, to become a true believer the supernatural forces. Moreover, the supportive player Colonel Wilson begins as a kind of irritable comedic buffoon, and who ends up being Parkins's heroic saviour.

On a thematic level there isn't much to discuss. James was not interested in setting up moral themes or guidelines, and the characters who encountered the supernatural forces did so by accident rather than as a form of punishment. His characters were not amoral and not being chased down due to any kind of sin; moreover, the protagonists generally got away from the pursuing forces, or were merely vehicles to help explain why such a ghost existed, as in "Number 13" which, despite being among the creepiest of the antiquarian tales, featured a protagonist investigating a ghostly presence without ever being threatened by it. The same Colonel Wilson mentioned above lets Parkins know that the ghost encountered in his hotel room was never a threat, simply an apparition, and is firmly convinced that the spirit was not acting maliciously but instinctively, and that even if it did want to harm Parkins or anyone else, could not due its formless spirit nature. Though these ghouls are quite frightful and unnerving, from the hairy demon in "Canon Alberic's Scrap-Book" to the dancing shadow in "Number 13," they are indeed never threatening and no one ever really gets hurt.

So what are these ghosts that are so spooky, feared and yet never a threat? Like the antiquarian objects that James and his protagonists admire, the ghosts are historical relics with stories of their own. They are not avenging spirits from the grave though they do at times play a part in an ancient curse. They have no malignant purpose, and are awakened, usually temporarily, by the curious mind of an academic Englishman. Their purpose is at times to enlighten the curious about a past incident, such as the ghostly image on the mezzotint in "The Mezzotint," or the shadows in "Number 13." In "The Treasure of Abbot Thomas" the ghost is a protector of relics, and it's even hinted at that the spirit has stayed behind simply to see what would happen once the complex series of clues surrounding the buried treasure has been organized.

Neither characters nor spirits are aiming to do anything wrong, and in James it is the meeting between the (often medieval) past and the curious Englishman that results in an effective yet harmless scare. It is interesting that one of the most genuinely scary authors rarely managed to hurt a soul, and that fact is simply an additional claim to James's genius. In this vein, as author of these tales, James himself was an antiquarian ghost, a vessel linking the history of these objects to the reader of these stories. Sure he frightened us, but never would he hurt a soul.