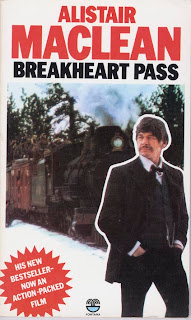 Breakheart Pass was (more favourably) reviewed for Friday's Forgotten Books by J Kingston Pierce back in 2010. The review is available through The Rap Sheet or Pattinase.


Visit Breakheart Pass:
at Goodreads
at IBList
at IMDb (for the movie)

When I was a kid in the mid-to-late 1980s my parents were among the last in the neighbourhood, perhaps even the western hemisphere, to purchase that bulky hunk of metal known as a video cassette recorder. Popularly known at the time as a VCR, it was a piece of medieval technology that could both record and play back movies using a cheap, slim strip of plastic encased in a large rectangular hard plastic casing (known as a cassette). Oddly, at times appropriately, the hard casing was worth more than the flimsy strip that contained the data. This massive cassette slipped inside that box of metal, often getting stuck, which in turn was hooked to your television set--not that sleek and slim apparatus in your living room, bedroom, washroom, etc., but that massive 100-inch frame that held your sixteen-inch monitor and needed at least six people to help cart away to the nearest garbage heap when, with a startling puff of smoke, one of the glass tubes blew up.

(Most of you are probably laughing at my wild fantasy, but this was reality back in those dark ages.)

One evening before supper my mom ushered me out of the house to pick up a movie. My brother didn't want to come and the pressure to find a good film gripped me during that ten-minute walk to our video rental store. (Yes, this was a dark era when to watch a movie at home you had to first leave the house.) I dreaded the chore, knowing that if I picked a bad film my mom, being a film lover, and my brother, being an older brother, would never let me hear the end of it. Days it seemed I searched those shelves of videocassette boxes for something we all would enjoy, until my eye was caught by a photo of Charles Bronson covered in western garb hanging from a train overlooking a ravine. That film was (obviously) Breakheart Pass, a film scripted by the novel's author, Alistair MacLean.

Fans of MacLean consider Breakheart Pass to be among the oddest of his novels, and it flopped on its initial release. A later MacLean work, it focuses as usual primarily on action and plot, but is his first novel set in the American West. It deals with a motley crew of white gun-runners, US Army soldiers and Paiute Indians, rather than his normal array of spies, soldiers and other evildoers. I have little opinion on all this since I haven't read any of MacLean's work prior to this one. Wanting to have a go at popular authors I've been ignoring, MacLean came to mind, and it's my memory of the film that peaked my interest in the novel. Though it's been twenty-plus years, I recall quite a bit about the movie, and I enjoyed it at the time, which is a lot more than I can say about the novel.

Breakheart Pass is a quick adventure, and despite a fairly decent premise, a wide range of colourful characters, plenty of mystery and a train (there's just something about a good story/movie set on a train), it all ends up derailing. Yes, even the train. The problems are many, but really what killed it for me was MacLean's unfair treatment of information and the all-too uninteresting tough-guy hero John Deakin.

Information appears to be revealed at the most convenient of times, except when it is revealed apparently randomly and for little purpose (like that whole Peabody thing; I didn't see it coming but when it arrived I just didn't care). Hero Deakin knows so much more than the reader, and smiles knowingly not only at the bad guys and the token woman who hates/is hot for him, but he seems to also be grinning at us. (Hey reader, he seems to be saying, this is gonna be cool.) Perhaps this mess is the result of an attempt to make us feel as though we too are on that chaotic train, but it's most likely the consequence of rushed writing and laziness. The novel is written so haphazardly and with such unbelievable lines as "She gave him a look as cold as ice," that I doubt MacLean spent too much time in the composition, or perhaps this quick straightforward and unimaginative style was his bid for the contract to write the screenplay, which was eventually offered to him.

As for Deakin he is a man of few words, but his few words are so vacuous and expected that it would have been better had he been mute. He comes across as abrasive and unpleasant, and the film producers lucked out in nabbing the abrasive yet far more charming tough guy Bronson to take on the role (a man who was apparently tough enough to declined the role of the "man with no name" character in Sergio Leone's three popular films). On paper Deakin is too clever both for the plot and the reader, concocting not too exciting methods of escaping the train and dealing with the evildoers, methods he keeps to himself and, well, keeps to everyone but the reader, saying things like "I've got a plan" fittingly at the end of the chapter, allowing the author to jump to another scene at the opening of the next chapter and leaving us in the dark. (Apparently this is what we call "suspense.") And what Deakin comes up with usually consists of blowing something up.

The opening was a little slow but half-way through I was quite into it, soon losing interest and speeding through the rest so quickly that I had to pause and wait for the train to catch up with me before I could go on. Finally I was done, and had to face that final pitiful exchange between Deakin and Marica.

Sadly I'm left to wonder if re-watching the movie would kill that twenty-something year memory of a "good" film.