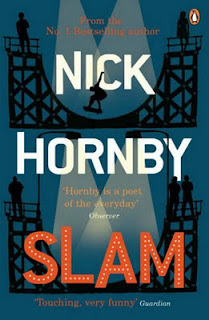 Look for other reviews, quite all over the place, of Slam at Goodreads.

Fans of Nick Hornby will recommend any other book of his as a launching pad to get to know the author. Indeed, High Fidelity and About a Boy seem the most popular. I ended up starting with Slam simply because I had a copy lying around that a neighbour had tossed away, and I was only half-way through when I learned that Slam is a Young Adult novel. Perhaps that says a good amount about me, needing to be told the genre of this book, or any mainstream book, but whatever the analysis I was a bit sorry to have made that discovery, since it prejudiced my reading a little. I have not jumped onto the YA bandwagon, and don't plan to write any YA material myself, and yet I am glad that there is an emphasis on YA fiction since it promotes literacy and gets people to unplug themselves from social media and be handed some form of food for thought. Personally I'm an adult reader of adult fiction, I enjoy the classics, Eastern European fiction and things on the darker side. I read horror, short stories of all genres and lesser known literature (or "general fiction") which I like to write about, and here I am, with my two university degrees, adult writing and adult reading, caught in public reading a YA novel! For shame!

(Of course I'm being sarcastic. I still remember that poor guy in a university creative writing course who, without an ounce of self-consciousness, went on an informed spiel about the progression of Stephen King's writing,. Rather than listening and, god forbid, learning something, most others in the group were busy being noticeably annoyed that the impostor's name was even mentioned. They were even more annoyed when I started asking serious questions, prolonging the lecture. Really, how dare someone interfere with the course that they are paying for in order to help provide education? I'm surprised either of us managed to graduate and make a reasonable transition to the greater part of society. )

Okay, so I sort of enjoyed Slam. Whether classified Young Adult or Geriatric, the book was somewhat enjoyable but altogether frustrating. I laughed at times and was surprised at times. Laughing and being surprised are part of a positive experience. I was also annoyed at times, even frustrated. I'm no expert on adolescent or teen psychology and won't pretend to know the latest theories on how Hornby or anyone can affect the young mind by creating such an irresponsible, self-centred teenager... Wait. Isn't the point of being a teenager to be self-centred and irresponsible? Sigh... Hornby gets away with it.

What frustrated me the most was the lack of purpose and direction. No, the book is not a warning against teen parenthood or skateboarding. (If you haven't read the novel, it's told through the point of view of a sixteen year-old skater named Sam who knocks up his gorgeous girlfriend. Yes, she's gorgeous, of course she is, as Hornby--I mean Sam (no I don't) keeps reminding us.) The lack of direction, more so than purpose, deposited a sediment of doubt for the novel's overall effect, and that doubt was proven true when, after reading each milestone Sam and Alicia must experience, I am left thinking that the scene is exactly as I'd expected it to be. Though is was consistently funny.

Sam is telling us of two years of his life, from meeting the sexy Alicia to impregnating her and becoming a father, with lots of rambling, repetition and fine humour. The humour is really the only thing that makes the book worth reading. Perhaps a young adult would enjoy it on different levels, everything the constant dropping of pop culture references to the self-deprecating humour. I must say that Hornby is sensitive to Alicia's plight, in many ways more so than to Sam's, which is great for any young male reader to grasp the point of view of the one most affected by the pregnancy. 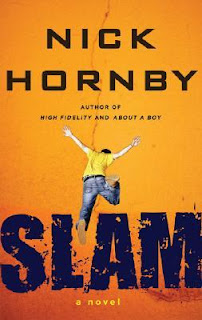 Minor spoiler. There's something Hornby does in Slam that I truly enjoyed. At about page 100, when I was starting to wonder if the story was actually going anywhere and looking over at my shelf for something I would much rather read, Sam, while talking to his Tony Hawk poster, gets "whizzed" into the future. He awakens when his son, evidently named Roof, is a few weeks old, and must go through the day without really knowing what's going on. I liked the touch and really don't care (in fact, prefer) that no explanation is given. A great, original touch, I felt. Now, the purpose eludes me, except that at the end we get another future "whizzing" and hence a brief epilogue of Sam's post-novel life. An annoying aspect of the "whizzing" is that Sam keeps mentioning it, to the point that every time he said "...that time when I got whizzed into the future," I was ready to give the book a slam of my own.

The title refers to Slamming on your skateboard, taking a nasty fall, and how Sam slams in life by knocking up the gorgeous beautiful sexy Alicia.

Overall it is not a book I would recommend.

Unknown said...
This comment has been removed by a blog administrator.
24 March, 2022