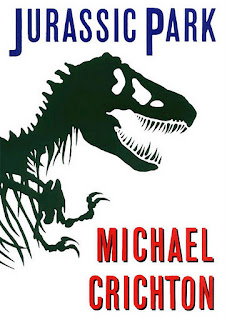 For other editions, see Jurassic Park at Goodreads or ISFDb.

My response to Michael Crichton's best-known work was surprising: I was glued to the novel and highly entertained. Despite its contentious science, half-formed characters and overly long sequences, Jurassic Park is a good read. The set-up is long yet interesting, as Crichton speculates about the details of bringing dinosaurs back to life, along with the tightly considered aspects of creating and running a dinosaur amusement park. Indeed the set-up is the stronger portion of the novel, since the latter half is burdened by the overly long chase and attack sequences, and the over-written, often annoying rantings of mathematician Ian Malcolm.

Malcolm comes across as Crichton in disguise. A raving chaos theorist, he is the antithesis to Jurassic Park's creator and mad corporate man, John Hammond (perhaps the first mad scientist who isn't actually a scientist at all, though corporatism is a form of modern science). Both characters are portrayed as narrow-minded in their obsessive world views (Malcolm unintentionally), though we see that Crichton's sympathies lie with the mathematician if only because his long-winded rants remain unchallenged by other characters, aside from Hammond's "I don't know what you're talking about.

What Malcolm and Crichton are talking about is the notion of responsibility. Using science, nearly anyone can create a remarkable wonder or discover a fascinating aspect of the Earth's past, yet humans fail in that they do not consider the consequences of their creations or their discoveries. While striving for accomplishment, humans are destined to harm the world around them. This idea is highlighted by a scene late in the book when Hammond manages to blame nearly everyone for the failure of his amusement park, from his grandchildren to the local hired hands, leaving out only the reader and Crichton himself. (Imagine that for a a great postmodern twist: "It was the author's fault for writing this novel, Hammond insisted.")

Among Malcolm's many empirical and overblown statements is: "Discovery is always a rape of the natural world. Always." (284) Though his opening statements are interesting, he loses credibility with Crichton's inability to have him stop. (Thankfully I like to end my own points quickly, though some of you currently entangled on the internets are probably thinking "Not quickly enough.")

The difficulties with these passages are essentially related to character. The many characters in the novel are unfortunately handled quite poorly. Crichton inserts brief character descriptions at certain points, keeping them brief so as not to interfere with the fast-paced plot. The characters remain mostly sketches, delineated with familiar traits (computer wiz Dennis Nedry is a junk-a-holic, computer operator John Arnold is a nervous chain-smoker, while park warden Robert Muldoon likes to nip from a flask, which he oddly seems to discover only late in the book). The kids can get annoying and repetitive, and some characters seem to disappear despite having a strong initial presence, in particular Dr. Ellie Sattler, the only adult female character of note.

Jurassic Park is yet another work that would have been more successful if shortened. I would easily bite off about fifty or sixty pages, and the dinosaur-attacking-kids sequences and Malcolm's rantings would be my first victims. The reader is fairly certain that the kids will not be among the victims, so these scenes lack suspense. I believe Crichton, despite the violence and occasional profanity, was hoping to reach a younger audience along with the adults. Specifically he seems to have wanted a younger male audience, as he mentions more than once that young boys are inherently interested in dinosaurs, and Timothy is far more heroic than little sister Alexis. This need explains the emphasis on adventure alongside the smart nerdy boy, while the tom-boy girl eventually proves to be less of an athlete and more of a whiner.


List of Characters (excluding minor players; notice how a number of characters have first names as last names.)

Posted by Casual Debris at 3:20 PM

That's a triple negative that you've got up there!

Great blog, I'm looking forward to those posts if they do appear...

Thanks for the encouragement Colin. I'll be back home & to my "normal" life in mid-November, so the dozen or so half-written posts should see light shortly thereafter. (And my mail-gathering brother informs me that the new Fiction Desk has arrived!) In the meantime my reading will be on the lighter side (hence Jurassic Park).

Congratulations on handing in your thesis; I submitted mine last year & the entire MA experience was quite the accomplishment, despite its frustrating aspects.