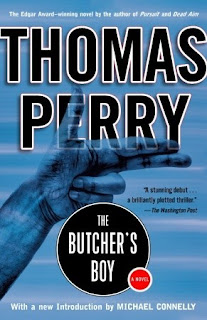 Thomas Perry's first novel received the prestigious Edgar Award for Best First Novel by the Mystery Writers of America. The novel tells the overlapping narratives of a hit-man known as "The Butcher's Boy" who gets caught amid tensions of the organized crime assortment, and an intelligent and hard-working Justice Department crime analyst on her first field assignment. The Butcher's Boy is a good read, both tense and interesting. The tension is generated by a smart, nameless hit-man trying to outrun the criminals determined to find and kill him. The interesting bits come from the fact that the various judicial parties of the United States are improperly organized, work poorly together amid professional diplomacies and lack of straightforward communication, and essentially foil an investigation that our young analyst, Elizabeth Waring, works so hard to piece together. The two separate narratives work well side by side with only a few plodding moments in an otherwise well-paced thriller. I bought the plot except for one all-too convenient encounter near the end.

The problems with the novel are more social than technical. For one thing, having been written in the archaic heyday of those dark ages known as the 1980s (yes kids, the 80s are not a myth that your parents have made up just to freak you out; they really did happen). Characters spend far too much time looking for telephones, waiting to be transferred and placing messages that even a semi-Luddite such as I is now considering getting a cell phone. There is even a scene when Waring asks where the police keep their computers, as though the entire precinct shares two. (And each one probably requires an entire room and a team of technicians to operate.) Earlier novels get away with their own ancient forms of technology, but reading something fairly modern, written shortly before the computer craze, feels somehow odd. Of course I don't blame Perry or the novel for this, but rather I blame the world that we have created. 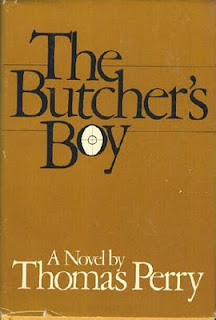 The early 1980s also suffered from self-conscious depictions of female leads. Partially left over from feminist attitudes of the 1970s, the 80s also tried to bring women into the lead in thrillers, especially with the popularity of Ellen Ripley. Horror movies, action movies and mystery books all came aboard with their female heroes, which is great, only there was a bit of awkwardness at the beginning, particularly with male authors who were self-consciously trying to create the tough and smart woman trapped in a man's world scenario. Sure Agent Waring is smart, as she is tough and (surprise!) attractive, but she does make a number of big-time mistakes and is upstaged by the even smarter, tougher (though perhaps not as attractive) butcher's boy. This is evidenced by the brief "meeting" the two have at the end, a scene which I quite enjoyed. In the earlier scenes of Waring on the field, we glimpse her thoughts as she analyses her interactions with other operatives, all male. She is a double outsider, as a woman and as an FBI agent. It doesn't help that she has so little professional authority. An interesting piece of western social history.