Tales from the Darkside Season One: Episodes 17 to 23

And here are the final six episodes from season one. More oddities, and a solid final third. 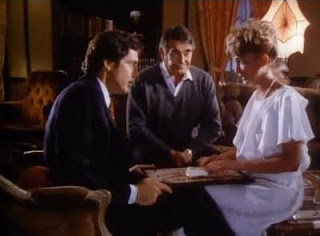 Wealthy Edward Osborne is at his large home one evening with his young wife Cathy and business partner Michael Fox. Playing with a Ouija board, Cathy learns from a spirit named Ben that there is a walled off room in the house, and that he, the spirit, is living there. This episode is quite good, but the messy and completely illogical ending weakens it.

Half-way through the episode is a moment of anticlimax. Just before entering the madness room, amid dramatic music, the wife pulls out a gun, and this is where the commercial break was originally inserted. When we return to the action, glued to our screens after being forced to watch commercial products waved at us from the screen, the wife says that she brought it with her "just in case." The false suspense is irritating, and reminds me of the scene in Stephen King's Misery when Annie Wilkes complains to Paul Sheldon that those old radio programs cheated their listeners by creating false cliffhangers. Alas, Annie, it is not just the tool of old-time radio programming. Of course the gun is needed later, but by then I was already a little annoyed by the manipulative scene.

The silliness of the ending involves a spoiler, so it's time to shrink the font a little. The spirit wants the door closed, and later tells the husband to drop the key in a crack in the floor. This essentially dooms all three of them, as we learn that the entire fantasy was created by wife and colleague to kill off wealthy husband. How anyone can be so idiotic, especially when devising such an elaborate plan, to get rid of the only key to the door is beyond logic. And why does Ed even lock the door in the first place? Well, it turns out neither of them wrote that last line, and, oh my lord, there is actually a ghost in that room, even though we learn that the room was just built during some renovations as part of the elaborate scheme. So where did this ghost come from? Are we supposed to be mesmerised by this clever twist, even believe it? Dear reader, thank you for reading this far... but, oh no, there's a ghost in my blog! Mwa-hahahaha!

The idea is not terribly original, and we do know that there is some kind of plot afoot, yet the suspense is well done and for most of the episode I was unsure as to who was trying to trick whom. Stuart Whitman as Edward is good, and Therese Pare is fine as Cathy in her first of two Darkside appearances, the second being "Baker's Dozen" (S3E9), while she was also a stand-in for the series. Unfortunately, Nick Benedict as colleague and lover Michael is weak: "Ever since I was a kid I've heard... bad things about Ouija boards." Which is interesting because ever since I was a kid I've heard bad scriptwriting. 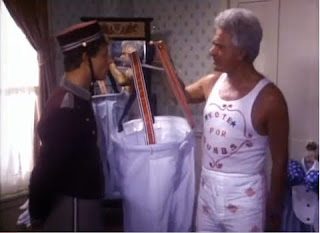 Senatorial candidate Bo Gumbs arrives at an odd little hotel during his campaign tour, where he unceasingly presses his image to the apparently only two hotel employees. Arrogant, loud-mouthed yet somehow charming, Gumbs is quite clownish, and that odd hotel pair seem to be helping to fulfill his clownish destiny. Gumbs is played by Dick Shawn, an excellent casting choice for both comedic talent and reputation as an off-the-wall performer, and Shawn does an excellent job at getting across the various levels of Gumbs's persona, from out-and-out hyperbolic campaigner to the more subtle tones of one confused yet straining to maintain the charm that runs his persona. This is among the more unclassifiable episodes, and despite a very low rating on IMDb (a 3.7 on the first forty votes), it is among my favourite first season episodes.

The charm and intrigue lies in the episode's notion of absurdity. Gumbs has arrived in a king of alternate reality that may exist only in his head. The world has suddenly transformed around him, the people appear strange and not only become wholeheartedly involved in his image, even encourage it to its depths. Yet, if we were to examine the situation closely, the world is exactly as it always was. Gumbs does not transform magically into a clown since he already is one, and in the eyes of his campaign manager, no transformation actually occurs. What is happening, on a subtle level, is that Gumbs is beginning to see himself as he truly is, and though he fights this vision early on, he accepts it by the end, driving off in a clown mobile. It's a positive thing, really, and while we can hope for him to change and become a better candidate and a better person, he achieves what most do not, which is the acceptance of self. We can further speculate (though I'm flying well off the context of the episode since there is nothing that explicitly implies this), that since he does accept himself for who he is, he is more able to begin affecting any changes.

Co-written by David Gerold, the man who scripted the excellent Star Trek episode "The Trouble with Tribbles," as well as a number of other television shows, and directer Armand Mastroianni in his second of four Darksides. Mastroianni went on to a lengthy, on-going career as television director, which included episodes of War of the Worlds, Friday the 13th and a host of television movies. 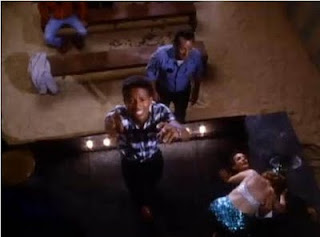 Young Frank drags buddy Ernie to a run-down circus sideshow where once famous illusionist Kharma is now performing. Excited to witness Kharma's incredible, awe defying levitation trick, Frank is terribly disappointed to see a performance filled with standard, childish magic tricks, from flowers disappearing and reappearing, to a bland guillotine routine. Not allowing his childhood idol to disappoint him, Frank instead antagonises the veteran magician.

This is another good episode, though the acting by the young men is a little weak. Joe Turkel, however, is great as Kharma, and a somewhat plodding, repetitive episode is saved by a strong ending. Another of the "he gets what he deserves" episodes, though his fate is perhaps unjust.


"It All Comes Out in the Wash." (S1E20) First aired 26 May 1985. Directed by Frank De Palma from an original script by Harvey Jacobs. Starring VinCE Edwards, James Hong and Ellen Winthrop. 7/10

Ruthless businessman Henry Gropper visits an unusual Laundromat, one which, for a steep price, will wash out not just stains and dirt, but a person's sins. With a free conscience, Gropper is able to aggressively pursue his business interests, taking people down whenever it benefits the bankbooks. A good moral story that is carried by strong performances by Vince Edwards as Gropper and prolific character actor James Hong as Chow Ting. The concept itself is intriguing and the episode build-up is very good, even though there is no actual plot. It's the good monologue and Edwards's ability to solidly deliver on the script. The body of most Darkside episodes tend to drag on, particularly those with no clear linear plot. Because of the lack of setting and characters, the show relies heavily on monologues, from people talking on the phone, or talking to themselves. The monolog is well written here, bettered by the delivery, and the phone conversations remain linked to the story-line, though they don't actually move the story forward. The ending here, which is not shocking nor surprising, is a little too sudden. 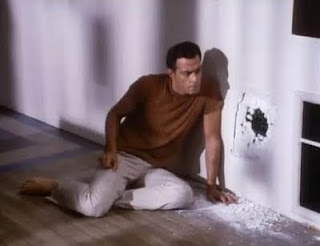 This is a very well constructed episode, utilizing some common prison story elements, such as the unseen inmate next door, and a good performance by long-time TV actor Richard Romanus as Bigalow (he was also Michael on Martin Scorsese's Mean Streets). The familiar face (and mostly it's just his face) of Sam Anderson appears as the appropriately named Dr. Synapsis. There are some elements that are never fully developed, or just don't go anywhere, such as the breaking of the alarm and, suddenly, another appearing in its place, as well the unseen inmate, who sort of disappears. Of course there is a psychological element that allows for a surreal quality in the unfolding of events, and the overall strength of the episode forgives the minor problems. The ending is excellent and, to me at least, unpredictable as well as appropriate. 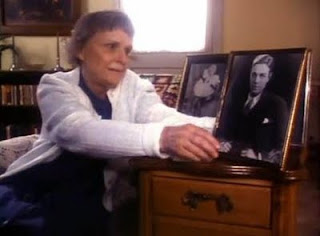 Grandma isn't getting younger. She's become forgetful, unhelpful, and a bit of a nuisance. Her family wishes she would agree to go to a home, but she likes it fine right here with her son, his wife and their teenaged daughter. Finally family forces her into a corner, and she no longer has a choice in the matter. But because they love her, they want her final week at home to be special, and offer her a wish, any wish in the world, that they will promise to help materialise.

Among the few Darksides in which the humour works, due partly to its quirky nature, but particularly to Jane Connell's performance as Grandma. The episode also features TV icon Gregory Itzin as a retirement home rep. Now to be honest, the family doesn't deserve what they get at the end, and Grandma's wish does illustrate even to her the difficulties of living with an older grandmother (though this one is far from facing many disabilities), but there is something fun in the episode's second half, which makes up for a somewhat irritating opening. The intentions are good though the message is messily conveyed and the execution contradicts its intention. 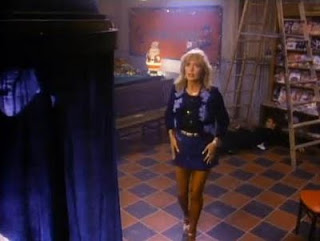 Addicted to the hope eked out by various agents of fortune, from astrology to cards, and particularly from electronic fortune-telling machines, Cassie Pines arrives at her small-town bus station. She's been directed here by Madame X, her favourite electronic fortune-dispenser, because on a bus stopping at Lubbock she is to meet her special Sagittarian love. Here she encounters Horace X, son of Madame X, who warns her away from this path because of danger, and tells her to beware of false prophets. To complicate matters, in walks Heat Jones, who immediately and aggressively pursues her. What to do? Poor confused Cassie is aflutter, as is the audience by such an unusual episode, starring country singer Ronee Blakley as Cassie and life-long soap actor Justin Deas as Heat. Both actors are great, with Blakley begging sympathy and Deas occasionally awkward, but it's perhaps Bill Fiore's voice acting as the machine Horace X who steals the show. I wasn't initially sure what to make of this jumbled mess, but I sure enjoyed watching it. There's an underlying warning about letting others set your destiny and make your important choices, and there is also the idea that it's best to be uncertain of your future so that you can enjoy the present.

The story is essentially an allegory, with each male figure embodying clashing ideals. Heat Jones is the "in the moment" guy, personifying the idea that you should let life guide you as it comes, while Horace X embodies the attitude that it's best to play it safe, that happiness can only be achieved when the outcome is already clear. Cassie is struggling with these two notions, wishing for happiness but unsure what to trust.

Posted by Casual Debris at 5:57 PM