Tales from the Darkside Season One: Episodes 9 to 16


Tales from the Darkside was a mixture of horror and fantasy, often mixing in elements of mystery and/or comedy. There was also some unique storytelling and great innovation, a few even difficult to categorise. Though many come across as weak, at times dry and often predictable, their intent is nonetheless unique for television.

"A man in your condition's got no right to be askin' questions. When the Lord calls, you're s'posed to answer!" 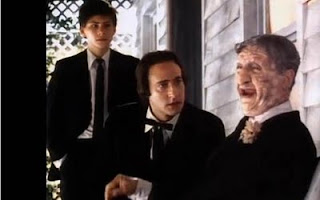 In a rural southern community, to the annoyance of his daughter and grandson, a stubborn old man refuses to believe that he has died. Attempting to produce this episode was a gutsy move for Darkside. I read the short story many years ago and have revisited it since; I even own a copy of the October 1976 Magazine of Fantasy & Science Fiction in which it originally appeared. The short story is funny, entertaining, and has a marvellous ending; its only fault is that it drags near the end. This adaptation is surprisingly faithful, sometimes funny, featuring a strong lead performance, an alright ending, and contrary to the story, its pre-reveal sequence is too quick.

Electing to shorten the "voodoo woman" scene was a good decision, only it's so brief here that it fails to engage; indeed, this is among the small number of Darkside episodes that features such a large, involved cast, so giving everyone the opportunity for adequate screen-time is a challenge. Changing the ending is also necessary: the original ending is effective because you don't see Grandpa outside your own imagination, and Bloch uses precisely this to surprise the reader. Darkside's version tries not to sway too far from its source, but as soon as the kid pulls out the "magical" substance you know exactly what is going to happen. Though the final image loses the element of surprise, visually it's quite neat; Bloch's final moment is both surprising and visually (in the mind's eye) superb.

Grandpa Titus Tolliver is played by long-time character actor Eddie Bracken, who is fantastic as the stubborn old man. In the story it is the grandson who holds the pieces together, but here a fifteen year-old Christian Slater proves that as a teenager he was just as weak an actor as he was as an adult. Completely overshadowed by Bracken and the rest of the cast, Slater drags this episode down a notch, something made clear when he is the focus of the last five or so minutes; I suspect that it was partially due to his weakness that the "voodoo woman" scene was shortened. In fact, the premise of grandpa's stubbornness with Bracken's superb physical portrayal and verbal delivery make up the bulk of the episode. Even the preacher is given an extended scene, and Brent Spiner (android Data from Star Trek: The Next Generation) gives an all-out, crazed performance as Reverend Peabody that is fun to watch.

Maybe "gutsy" is a strong word on my part, but I am impressed with the attempt of translating something to screen that works so well on paper, and despite casting Slater, Darkside did do a good job. A strong script by eventual daytime soap writer James Houghton and good direction by Gerald Cotts (his first of four Darksides), as well as the acting, pull everything together nicely. Not only is it a difficult project, it makes for an unusual episode, and originality is certainly something that has always been lacking on TV. 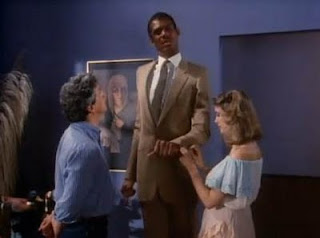 A down-on-their-luck newlywed couple (Colleen Camp and Charles Levin) buy an old lamp from a mysterious vendor that turns out to contain a cranky genie who, rather than grant them wishes, makes their life intolerable. I haven't read the original source material, and am mixed about Harlan Ellison's work in general. Whatever the original story, this episode is incredibly poor, and is generally considered among the weakest of the first season episodes. Kareem Abdul-Jabbar looks impressive as the genie (he looks impressive, period), but is quite weak in his delivery, the ludicrous fake "old" English rolling awkwardly off his tongue. As an actor, the 7'2" basketball superstar will always be best remembered for his role as co-pilot Roger Murdock in the craziness that is Airplane!

Failing scriptwriter Leon's new answering machine begins to interfere with his life. The machine is a 1984 colossus, about as large as a medium household printer. The episode is not terribly funny or even interesting, since it follows a to-be-expected plot-line. Harry Anderson does a good job in the lead, while being half-way through his first season as Judge Harry Stone on the successful sitcom Night Court. Anderson fits the failed writer dweeb role well enough, and competently pulls off the required facial expressions. He is even convincing as an unshaven smoker. Haskell Barkin's second Darkside script following "Pain Killer" is less competent, and is another weak attempt at oddball fantastical comedy.

"What a way to make a living." 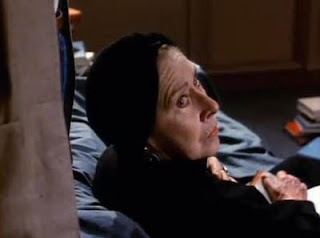 Popular tarot reader Catherine is secretly a disbeliever in the supernatural and the power of the tarot, and makes a good living by dispensing feel-good fortunes to her clients. Until a woman switches her cards. Not only have her predictions become accurate, they have also become deadly.

As with most Darkside episodes, this one becomes predictable half-way through, yet it is nonetheless enjoyable. The sets, lighting and cinematography work well, utilizing shadows and candlelight, though at times their logic is odd: at one point in a matter of moments the set switches from normal evening lighting to darkness and candlelight. Mood overcomes logic. Moreover, this one economizes poorly, as we learn the identity of the woman who planted the magical cards by a friend who just happens to guess correctly ("Oh, that must've been Madame Marlena"). The acting is quite good on all counts, even the bit parts, with a truly great dual performance from veteran stage and screen actor Carmen Mathews; she is almost unrecognizable between the sweet new client at the beginning and haunted fortune teller Madame Marlena near the end. 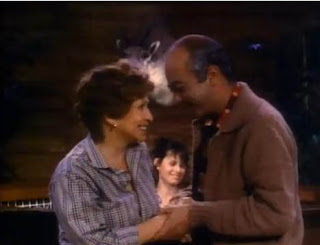 "It's going to be a wonderful anniversary."

Before their twenty-fifth anniversary, an elderly couple living on an isolated ranch take in a young runaway. Half-way through, the episode becomes utterly predictable, but it is nonetheless fun to watch. There are a number of neat shots, like the axe when the young couple first walk away from the house, the scene cutting to Elinor cutting some beef, but as neat as all this is, the cleverness is unfortunately a little overdone, the camera lingering far far far too long on the over-sized wooden spoon above the door. Veteran Alice Ghostley does a fantastic job as wife Elinor, Mario Roccuzzo is uneven as husband Henry, while Fredrica Duke as the young girl is plain bad. Directed by Darkside's most consistent regular John Strysik, his first of six.

A meek mathematics professor dabbling in black magic quits his job when he uncovers the numbers of a popular lottery. When his number misses by a single digit, he seeks out the hairdresser who has won the prize. This episode is a lot of fun and has more surprises than most first season episodes. Its attempts at humour fail, but Carol Kane delivers an excellent performance as the hairdresser, and Bud Cort manages to keep up with her as the desperate professor.


"Answer Me." (S1E15) First aired 17 February 1985. Directed by Richard Friedman, written by Michael McDowell from a story by McDowell and Dennis Schuetz. Starring Jean Marsh and a rotary telephone. 6/10 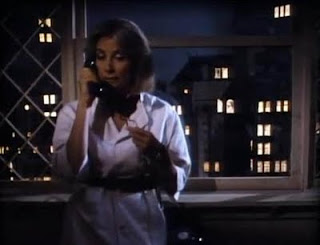 This odd story follows a second rate British actress who has just moved to New York City seeking work. The apartment she has taken on as a sublet is nice, except the phone next door rings incessantly in the middle of the night, and someone is constantly banging on the walls. The episode is a one-woman show with a strong performance by Jean Marsh (who played Alicia alongside the wonderful Jack Warden in the brilliant Twilight Zone episode "The Lonely").

"Answer Me" soon becomes predictable, even silly at its climax, but Marsh's performance and a well crafted, dimly lit atmosphere make it worth watching. The apartment, with its deserted hallway and silent elevator, is effectively creepy, and the music is quite good, moving from eerie to comical cords whenever Marsh can finally return to sleep. The ending is unusual, the phone coming across unfortunately hilarious rather than threatening, though I give the director and editor credit for creating a nifty phone-attack scene; it's not something easily managed, and makes today's mobile phones appear quite innocent.

Jessica Harper is the woman prone to tears while Victor Garber is the prissy-looking collector of tears, physical ones. Both actors do a fine job but it's playwright/actor Eric Bogosian who steals the show with his cameo as an aggressive homeless man. This is yet another odd entry, though despite the solid acting it comes off as dull and just a little silly.

Posted by Casual Debris at 4:46 PM