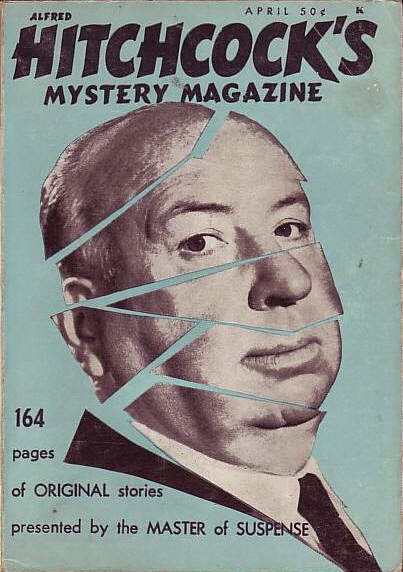 From the Alfred Hitchcock Introduction on the inside cover:

Dear Friends: Just as the robin is the harbinger of Spring, so here, in this April issue, you will find robbin' and other crimes solved in mystery and suspense to presage hours of reading enjoyment.

"Other crimes solved" is an odd descriptor, particularly since more than one crime in the issue remains unsolved, at least from the legal point of view; the criminal revealed to the reader alone.

This introduction, penned no doubt by a staff member, perhaps even an intern, includes a blurb for "my new anthology, ALFRED HITCHCOCK PRESENTS STORIES MY MOTHER NEVER TOLD ME, which, by Jove, she never did." A reminder that these magazines served well in promoting related merchandise, including other magazines owned by the same parent company.

Marketing aside, this is an overall strong issue, highlighted by a clever Jack Ritchie piece, an excellent Lawrence Block story, and an obscure comedic treasure by David Mutch. 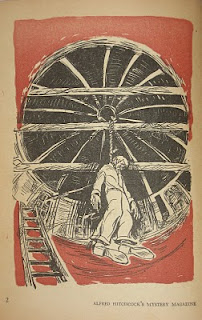 (I apologize for the quality of some of the photos, but not wishing to crease the pages I needed to hold the magazine half-way open. Some page are also unfortunately yellowed.)

Working on a rainy Saturday afternoon at the county courthouse, County Attorney Lon Gates receives a mysterious phone call, telling him to "go look in the dome." Sure enough he goes, and at the dome finds the dangling corpse of the former county attorney. A fairly standard mystery, entertaining for what it is: a small town who-dun-it that evokes former ties...

The 1960s drawing and colour are a treat; it is behind the table of contents on the left side, facing the story itself. The three dimensional image is actually quite effective, and though not the strongest story for a lead-in, it's definitely the strongest work of art in this issue. 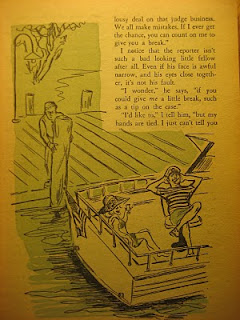 A grumbling incompetent police officer tells of homicide's hero "Red" Wilson, and how his career has progressed through luck. I've never heard of David Mutch, but he appears to have had a few stories published in AHMM. This one is skillfully rendered as it drips with irony and tongue-in-cheek humour, much of it laugh-out-loud. The truly bumbling narrator recounts a tough case that Wilson closes on pure luck. Of course, his interpretation of luck might, in another's view, be construed as skill. Potayto, potahto...

Some great lines include, "...which is a big nut house or, if you want to be polite about it, what you call a 'home for the mentally arranged." There's also a precious scene with Wilson trying to explain a detail of the case to our fool, who has asked what certain audio tapes contain: "We haven't heard the tapes yet. The governess has them. Being English, she likes to live in England." Reminiscent of some of Mark Twain's ironic tales, such as "Luck," this was a pure joy to read.

(Anyone know anything about David Mutch? If so, please share your knowledge.)

Harry Wright is approached by the firm's accountant Myron Coolidge, who has discovered that Wright has been sneaking company funds to support his gambling habit. Soft-hearted, Coolidge warns him to return the money in a week or he would report him for embezzlement. Rather than comply, the amoral Wright devises a plan to rid himself (and the world) of the accountant, untroubled by the fact that it would likely harm others as well. The plot he devises to kill the accountant is neat, but the rest of the story felt flat. Too many coincidences, for one thing, and while the opening conversation between the two men is well written, the rest was done by rote. 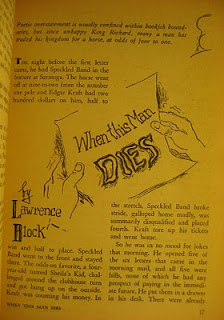 Reading this issue as a kid, Block's story was the first AHMM piece that really nabbed and surprised, on par with the AH Presents reruns I used to love (and in all honesty still do). Edgar Kraft, an average working man drowning in debt who likes to bet on the horses, receives an anonymous note that includes a man's name, and reads, simply:

When this man dies
You will receive
Five hundred dollars

When the name does die (at a hospital of old age) Kraft receives, again via mail, the five hundred in cash, with a simple note: "Thank you." Another such note arrives, this time offering a sum of seven hundred and fifty dollars, and the grateful Kraft wonders why him? And I won't give anything more away.

Block's story, even the second time around (though after many years) is a terrific body of suspense, the story steadily mounting and capping with a great finish. Designers did a fantastic job to ensure the final sentence is printed just at the bottom of the right-hand page, so as the reader reads, the ending does not appear to be just ahead. No eyes will temptingly glance to the finish and the surprise becomes even more of a surprise. There is, however, more to this story than the gimmick. Block wrote this out in a detailing of events rather than through individual scenes, so there is little dialogue and we remain glued to Kraft, as curious and anxious as he. The tone is actually light, edging on comical without spilling over, which adds to the unusual premise. Very well constructed and written story. 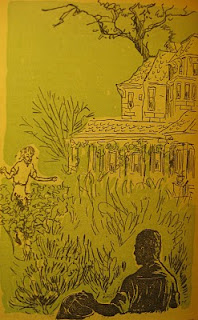 Driving through the town of Millvale, minding his own business, Eddie McCabe is promptly arrested for the murder of Miss Lucinda Devlin, the woman townsfolk were hoping would re-open the local mill and halt the Millvale's economic downfall. It's quite obvious who the guilty party is, but how can poor Eddie prove it, especially from prison? What do you know... a fairly good, quick read, but I didn't care for the ending.


[SPOILER: The immediate confession by such an amoral criminal seems more convenient than likely.] 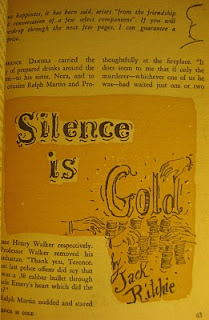 With their uncle recently murdered, four cousins sit around speculating about the inheritance they are about to receive and wonder which one of them is the culprit. The story is a straightforward third person narrative mixed in with first person internal monologue, and the combination of internal and external action reveals the identity of the murderer. A really fun and clever story, as expected from the great suspense short story writer Jack Ritchie. During my period of re-reading these old AHMM issues, somewhere in the mid-80s, Ritchie was among my favourite of its regular contributors.

Flying over a bay toward Mexico on a vacation tour, Roger Neff and his wife Kay receive the gift of first flight when the pilot has a sudden ruptured ulcer and passes out. Man takes control while woman screams hysterically and Mexican is in siesta. Airplane! had more suspense. 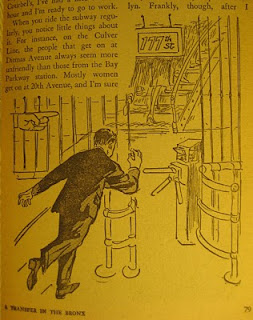 Every morning a forty-two year old bachelor rides the subway to work, from Brooklyn to the Bronx. Over time he becomes aware that while people do get off at the 177th Street station, no one ever gets on. This is an interesting little fantasy though I'm not sure how clearly the mystery is revealed. The vagueness works well, though it's trying to be more threatening than it appears to me; this might be the result of some poor aging. Of course, there might also be a detail that I'm just not getting. Reading this as a kid (I remember this one too) I was more confused (or perhaps it was disappointment I felt?) than today. 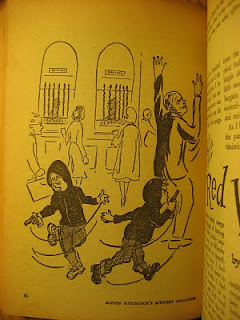 A man staying near the town of Wheeler has been enjoying the high life, but is now running out of money. During a visit to town and the local bank he notices two small boys playing stick-up with the customers, and this gives him an idea as to how to replete his dwindling account. A suspenseful read with a good ending.

A fourth man is found dead at home, execution style, and the only clue the lieutenant has to the identity of the murderer and the motive is a note to the latest victim from a woman named Anne. A nicely economized story, its quickness helps heighten the suspense. Moreover it has a great ending... even a little sad.

I remember in my youth not caring much for Sisk's short stories, thinking they were nicely character driven but lacking in the plot and surprise department. Of course, I was young when I was reading these back issues, and expectations at a younger age can be unrealistic. Having now read this Sisk piece, I suppose I was a perceptive youth.

At fourteen, protagonist Marcella Campion is alone at home as mother has gone for a show and some cocktails. The poor neglected girl is fed up with mommy's self-interested lifestyle. The short piece does well enough in delineating the relationship, yet the use of feline imagery is overdone: Marcella is described as being a kitten while her mother is a full-grown cat, references to claws, purring on the telephone and our kitten recalling being curled up contentedly in daddy's lap. The ending sort of just happens and has little to do directly with the plot, and I don't mean it comes out of nowhere, just that nearly any story can end like this. 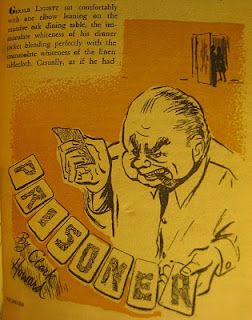 I remember this one well, or at least the solitaire game it introduced me to, which I played at the time but wouldn't recommend it as it is based on pure chance and no skill (or about 1% skill if counting up to thirty requires any). I haven't come across the game at any other time and wonder if it is of the author's invention.

In Monte Carlo, fortune hunter Gerald Liggett offers big guy Earl Montclare a little challenge involving a solitaire game named "Prisoner" and Montclare's wealthy sister Daphne. This one is alright, with a neat little twist. The title drawing on the left is excellent.

The body of Asbury Abernathy is unexpectedly uncovered at a construction site, and Sheriff Dan Peavey, along with his less competent troupe, investigate the woman Abernathy ran out on a couple of years back. However, with the corpse's face unrecognizable and some odd goings-on at the former Mrs. Abernathy's household, perhaps Asbury is still alive? Mystery with some slapstick comedy makes for an okay read. The thing about these average mysteries is that they work better when shorter, and these novelettes are only truly successful if they have earned their length with some unique element, be it a truly suspenseful mystery, a great set of characters or a unique method of delivery. They also work better when less predictable.