I have become addicted to Jupiter Moon.

Jupiter Moon is a UK science fiction soap opera produced in 1990 airing three times a week. It was dropped after about 150 episodes, though only 108 were initially aired. The show was set on Ilea, a space university in permanent orbit above Space City, Callisto moon, in the year 2050. The show was created and produced by William Smethurst. For a brief overview, see the wikipedia article.

I wasn't sure what to make of the first three or four episodes of the show: it was messy, awkward, and the sets and especially the costumes were just plain odd. Yet there was enough to keep me to watching, and by episode eight I was hooked. It is obvious that the writers began by tossing ideas about, as some plot-lines are abruptly dropped, and while the initial set-up appears focused on romantic elements, the love stories quickly take a back seat when the science fiction elements take over. Stuck in a massive cloud, character interactions are heightened and the show becomes quite exciting. The science is feasible (as far as I can tell) and the writing is solid, with realistic dialogue and some great one-liners. There are close to twenty characters to keep up with and the multiple story-lines, with their quick scenes, often clever and usually well delivered dialogue and character-driven action make the show a fast-paced, addictive affair.

What truly makes this show a pleasure to watch is the cast. Each actor does a fine job with their character, and the characters themselves are fascinating because they are dynamic and utterly flawed. (Okay, there is one character who simply annoys me with her repetitive whining, but the rest are fine.) Only two of the actors seem recognizable elsewhere: Anna Chancellor who portrays stunning ambitious navigator Mercedes Page, and dashing character actor Richard Lintern, who plays botanist James Bromwich. Stunning and dashing; the actors are (nearly) all quite good looking (especially the lovely Caroline Evans, the brainy post graduate physicis 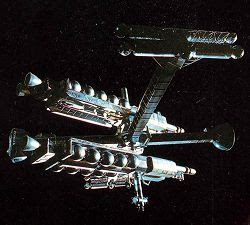 t Chantal de Gracy), but it is a soap opera after all (though I suppose the Star Trek franchise also selected a cast based partially on looks). My personal favourite cast members are Chancellor, along with Andy Rashleigh whose performance as the washed out, pride-filled Captain Eliot Creasy if filled with stubborn principles, subtle sensitivity and a good deal of humour, and Jason Durr, the self-interested Alex Hartmann, who is so good with his strange blond hair and odd German accent that I sometimes hate to even look at him. I also quite like Carolyn Backhouse as the station's, uh, schoolmistress? Despite these personal favourites others do a fine job, and while many seemed to have fallen to acting obscurity some can be seen in other television projects.

Costumes are truly insane, especially those weird bibs some of the men wear, and those less than complimentary bodysuits. I do like that characters recycle their wardrobe, though there are some dresses I would rather not have to look at. The set is silly but part of the fun. Alcohol bottles look like medicine jugs, supply boxes are emptier that the falling boulders in the original Star Trek, and glass coffee mugs are actually colourful Bodums. There is a scene when the sneaky Harmann glues some Mars dust onto a Valentine heart using... you guessed it, a yellow glue stick. The future, with its advanced operating tools, space flight and Jupiter moon stations is still dependent on glue sticks for their arts & crafts projects.

The DVD itself is not as interesting as the show. There is a typo in the menu so that on each disc the sixth episode (the one in the bottom left) reads "Epidose #," while the blurb at the back claims that each episode is "more astronomically addictive than the next!" I believe they meant "than the last"; since the first episode is a little weak and each "next" episode is less addictive I don't anyone could possible even dream of reaching episode 150.

I do have a confession to make: After having watched Episode 21 my interest has shifted. Now that a great threat has (seemingly) passed, character relationships are being re-evaluated and I am finding myself absorbed by the love stories. Hartmann's behaviour actually has me sympathizing though he is being a real jerk, and what will happen between lovely Chantal and dashing James (the way she says "James" makes me want to change my name; why was she never a Bond girl?). She is so adorable in the way she toys with him. Perhaps the show was a cruel ploy to get men hooked onto soap operas, and I am wondering if a British station will ever launch a horror story soap opera, something set during a zombie epidemic perhaps, though I suppose if the actors keep getting eaten it would be truly short-lived.

I am digressing terribly... I will likely share more thoughts as I continue watching.
Posted by Casual Debris at 10:35 PM