An earlier edition titled Guests was published in the UK by Headline Books, 1997. (I am not sure how or if the two editions differ, though there is a reference to The Store, which was first published in 1998.) 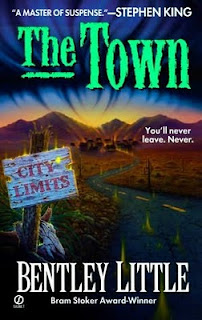 It is that singleness of effect which Edgar Allan Poe wrote about that makes the short story such a potentially powerful art form. Horror fiction is best suited to the short form, as a single effect or the simplest idea can generate a thunderous impact. A horror novel, on the other hand, must employ a greater variety of effect, of mood and emotion, and certainly of suspense and mystery, in order to be successful in its medium. Along with comedy it is arguably the most difficult genre in the long form, and few lengthy novels are truly successful. It is difficult to maintain a single source of tension over two hundred and more pages as the reader will likely tire of the monotony; variety shifts the reader's attention, whether the variety is in plot or effect. It is not normally enough to populate a novel with numerous characters and stretch the singular idea through character diversity, no matter how many dimensions those characters might have. If the novel's focus of tension is left dangling from a single source idea, it will soon wear thin. This is the first failure of Bentley Little's The Town.

At 276 pages the single effect wears so thin that it becomes almost invisible, and I soon found myself gazing beyond that thin veneer of tension and thinking ahead of the next novel I wanted to read (incidentally, Andrew Cowan's Pig).

The Town is structured through a series of episodes involving a number of characters, though centred mainly around Gregory Tomasov and his family. After winning a substantial Los Angeles lottery and as a consequence feeling idle and inconsequential, Tomasov moves his family (wife, three children and practicing Molokan mother) to his childhood home town of McGuane, Arizona. We soon learn that their new home, along with the entire town, is over-run with "uninvited" spirits. The episodic structure does not suit this novel well, as the episodes are often not directly connected to the central idea, and many scenes do little in enhancing or revealing the mystery around the strange occurrences. The novel does have a clear direction, yet it has little in the way of plot, and this awkward, clunky format leaves the work uneven.

Some scenes are certainly tense, and we find ourselves climbing up a slope toward its climactic peak, while others are seemingly pointless or just plain silly, tossing a roadblock ahead of us and stunting that upward climb. In maintaining its good moments and excising the silly, The Town could have been a decent novella. There is a nice chapter involving a boy who takes a picture of the evil banya, quickly developing the film to reveal the empty and run-down bathhouse filled with the wrinkled forms of some elderly ghosts. Another good moment has Tomasov's wife volunteering at the local library, happily chatting it up with the other volunteers until she learns that each are hopelessly paranoid, believing that the government is concealing the truth about a meteor that is hurtling toward the earth and a doom-filled collision. This tense and surprising moment is shortly followed by a scene depicting a Molokan priest being attacked by his bible. I could not help but laugh and think of Bruce Campbell and the fluttering book in Army of Darkness; though silly, Campbell's escapades are at the least entertaining. Unfortunately, the strange photographs of the banya and the conspiracy theorists at the library never reappear, so that these moments have little to do with anything, making me wonder why I was made to read them.

Bentley Little seems to have had a fairly general and abstract idea, and rather than unite the small parts into a solid an cohesive whole, he simply fills 276 pages with as many creepy (or silly) scenes that fail to help ground the work. Just because something is supernatural does not mean it should not be governed by some form of logic. This is the novel's secondary flaw. 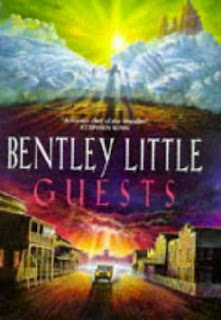 vents are never clearly explained and ideas are tossed about randomly, most often never followed up, characters disappear (such as the handyman Odd), so that it all becomes meaningless. Characters receive revelations "suddenly" rather than through any form of deductive process. This haphazard conceptualizing makes for a poor mystery and is not terribly fair to the reader; mysteries should be a collaboration between author and reader, with the reader being involved and taking part in the investigation. Town characters themselves do little active investigating despite the odd occurrences which I suppose makes sense since by the final page we realize there really isn't anything within these pages to investigate.

Despite these two major flaws the novel is strangely not terrible, and this is a mystery I have spent some minutes investigating. The characterization, including relationships, general interaction and internal thought processes, is quite good. There is here an unevenness as well, as some characters are inexplicably shoved to the background (not just in Odd disappearing but Tomasov's daughter Sasha is forgotten over much of the novel's middle while her two siblings are given a large amount of attention). There are some nice surprises near the end and the writing itself is competent. There is also some clunkiness provided by the publisher/printer in the unusual number of typos. The Town is the second novel by Little that I have read, and clearly The Store is a superior work.

On a side note, The Store is mentioned in passing: "There were no chain stores, no corporate gas stations... There was no Wal-Mart or The Store, no Texaco or Shell..." (20) This was a nice touch, and if other Little works are mentioned or alluded to, I was not one to pick up on them.