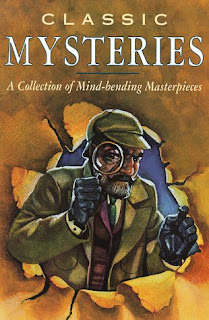 
It is a clever though not unique method to tempt a young audience to read classic authors, such as Chekhov, Twain and Poe, by collecting together a selection of their mysteries. This would also perhaps encourage them to chase down further classic works. This trick worked well on me as a ten year-old. I was first exposed to mysteries from those Alfred Hitchcock Random House anthologies geared to young readers, starting with Spellbinders in Suspense and quickly moving onto other titles. To add to my quickly growing interest in suspense stories, my elementary school English teacher, Mrs. Wise, read aloud some of the classics, and it was from her that I first encountered W.W. Jacobs's "The Monkey's Paw." A little later, as a twelve year-old in my first high school English class, I was first exposed to the wonders of Poe with "The Tell-Tale Heart," and to Shirley Jackson's masterful "The Lottery." There was no turning back.

Classic Mysteries: A Collection of Mind-bending Mysteries collects six such works, all originally published between 1844 and 1927. The stories collected here make up an odd but interesting mix. The title is a little much, though, as really only two of the selections can be called mind-bending, and not because they are beyond reason, but because they have enough plot twists to at least bend the course of one's thoughts. These are Mark Twain's "A Curious Experience" and Anna Katharine Green's "The Ruby and the Caldron." I wonder about the choice to include the weaker Clarence Rook piece; I suppose a young female sleuth would prevent alienating female readers. In fact, most of the stories do have a strong female element, which is refreshing, and likely a conscious consideration by female editor Molly Cooper.

Each author is introduced by Cooper and each story is highlighted by a pencil sketch from Barbara Kiwak. The introductions are quite good as they include some unusual tidbits amid the standard biographical fare we encounter in countless anthologies. The drawings are from an integral point of each story and are a nice addition. Drawn simply and thankfully without modern pretensions, sticking to their time periods, with not too much detail but enough to make the image real and whole. I like Kiwak's interpretations of both the situations and the characters.

Overall the book would entertain most youths, I think, though for adult readers some of the stories are a little tame. I have always enjoyed the works of Chekhov and Twain, and the selections by both are very good, particularly Twain's piece. I was also impressed with lesser-known Anna Katharine Green piece.

This story is not among Sherlock Holmes's stronger mysteries, and an unusual one in that it does not follow the standard Holmes pattern. The famous detective is called, along with Dr. Watson, to listen to a kind of confession from an unfortunately scarred woman, a confession that reveals the truth about an unsolved mystery involving a murder, a lion and a famous travelling circus. It is not a bad story though it does lack the Holmes & Watson interaction and deduction; indeed the two are but minor characters in this one. It also has one major flaw: why would a woman, desiring confession, request the audience of a detective rather than, say, a minister?

A comedic mystery with Chekhov's normally colourful characters. A satire more than a suspense story, the mystery is well wrapped up with the comedy, and the story culminates in a satisfying conclusion. There is so much ridiculousness in the character interactions, the deductions and the many clues that the messy little mystery is pure entertainment.

The Stir Outside the Café Royal by Clarence Rook     5/10
The Harmsworth Magazine, September 1898

Though it starts interestingly enough, with a young woman hopping off a carriage to follow a man she happens to notice on the street, the identities of the characters quickly become obvious, making the story the weakest among the group.

The Ruby and the Caldron by Anna Katharine Green     7/10
The Amethyst Box, Indianapolis: Bobbs-Merrill Company, April 1905

By the author of the once-popular 1878 novel The Leavenworth Case, one of the best-selling mysteries of all-time, this was a surprisingly good discovery. A fairly light mystery, I thoroughly enjoyed every aspect of it, and kept guessing as to the whereabouts of the ruby right along with sleuth Ebenezer Gryce. Told through the detective's point of view, we follow along as he is invited to a fashionable party to discover who has taken the valuable ruby that, having recently been lost, was in the midst of being returned to its owner. Along with Gryce we make the more obvious assumptions, only to be thwarted again and again. 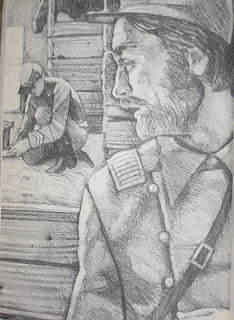 This lesser known story by Twain is among the stronger Twain stories I have encountered, and I've admired the author since an early age. This story works on many levels as it not only includes Twain's genuinely funny writing, but also offers a tght plot and good mystery, which is not always present in his short stories.

A young boy wanders into a northern garrison wishing to join the Yankee cause. The garrison colonel is faced with the task of figuring out whether the boy is a clever spy or a misunderstood youth. Openly hilarious with a tight mystery, I highly recommend this one.

(The image on the left is from the Twain piece. A soldier sent to spy on the boy hides in the barn the boy likes to frequent, and watches him place a sheet of paper beneath a haystack. It is one of the more detailed drawings, capturing the scene well and adding some nice shading. The boy's face remains mostly hidden, which adds to the mystery of his identity.)

This is a good addition and a strong conclusion to the book, offering something a little darker then the other entries. Though not Poe's best, it is among his stronger rarely collected works. Most anthologies will elect to reprint, for the upteenth time, the classic tales "The Cask of Amontillado," "The Tell-Tale Heart," "The Masque of the Red Death," "The Fall of the House of Usher," and so on, and while those selections are among his stronger works, Poe's other good stories too frequently remain undeservedly unread.

"The Oblong Box" is told through the point of view of a ship's passenger who obsesses about an acquaintance and fellow passenger who has oddly reserved an additional cabin. He boards the ship with an oblong box and an unusually unappealing bride, and not only does the bride share his own cabin, but so does the box, leaving the need for a second cabin a mystery our narrator desires to solve. Though Poe's narrator in this one is quite sane, he is nonetheless as obsessive as the madder characters we encounter in his work. While the mystery is less than shocking, the story is creepy, well paced and, as with Poe, nicely visual.

Posted by Casual Debris at 9:40 PM