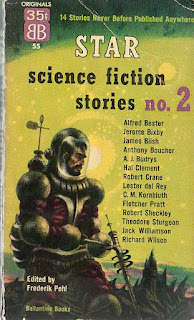 "Aunt Amy was out on the front porch, rocking back and forth in the highbacked chair and fanning herself, when Bill Soames rode his bicycle up the road and stopped in front of the house."
In the town of Peaksville, Ohio, population 46, three year-old Anthony controls pretty much everything. Born with extraordinary powers, he is able to read minds and move objects from a distance, yet does not have the maturity to understand his abilities or even the simple needs of his neighbours. Wanting often to help those around him, he instead harms them, sometimes horrifically, as he cannot fully understand the nature of their needs.
"It's a Good Life" is among the most intense, and most despairing horror stories I've ever read, and dare say, has ever been written. The story drops us right in the middle of its crisis, on an overly hot day where the townsfolk are nervous and afraid, but not as a result of the heat. The reader is gripped, quickly sympathetic to the townsfolk who must live in such extreme circumstances. Bixby's writing is clear and straightforward--there is no judgement, no condemning any behaviour, of Anthony's or anyone else's (we understand why a mob once tried to kill a three year-old). Yet the desperation and fear come out clearly in the dialogue and the actions of these people. The writing is so skilled and inspired in this story that there is no need to describe what is going on in the thoughts and feelings of the adults, and we read these snippets almost as three year-old Anthony experiences the world around him, watching their behaviour and listening to their words, yet as adults we are aware of the extraordinary circumstances of Peaksville, we understand the gravity of the situation and what is occurring behind behaviour and dialogue. Bixby is simply recording how things are, and that dry tone intensifies the horror of the situation. He gives us a mere glimpse of the lives of the townsfolk, only a few hours of a single day along with a handful of brief snippets of earlier events. During this time the adults perform their chores, and Bixby focuses on the sounds and smells everyone is experiencing, creating a kind of realism amid this extreme fantasy. For such a short story, the levels and extremes of emotion are unexpectedly high. These people are not living, though they occasionally try; they are surviving, and their method of survival is quite horrible, as they must, day in and day out, control not just their words, but their very thoughts.
The monster in this story is three year-old Anthony, yet he is not truly a monster, not an evil creature, but simply a child with limited understanding. Most of the time his intentions are good, only a three year-old cannot be expected to know how to solve the problems of others. Early on the narrator informs us that he tried to help when someone complained of a headache or that their children had mumps, and now no one thinks of these things anymore because they are afraid that Anthony would try to help. His simple mind is better suited for the field among the simpler minds of the animals whose needs are straightforward and clear. A bird is thirsty so a creek rises from he ground. Also like a child, the needs of others, when in conflict with his, lose out. So when he is enjoying listening to the piano and someone starts to sing, instinctively he makes them stop, only he stops them in the most horrible way, never intentionally wanting to cause harm, only for them to stop. The idea of harm, or the notion of death, does not exist in the consciousness of a three year-old. 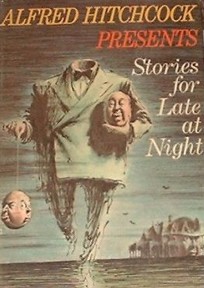 The story also features probably the best use of italics in a title. It's a good story. An exceptional one, really.
Adapted superbly for television by Rod Serling for The Twilight Zone's third season episode, "It's a Good Life." I've read the story several times over the years, but cannot recall where originally. Possibly in the anthology The Science Fiction Hall of Fame, Volume 1 (Robert Silverberg, ed., Doubleday 1970) or Alfred Hitchcock's Stories for Late at Night (Robert Arthur, ed., Random House, 1962).
The short story has been reprinted in various anthologies, numerous times in each decade since its initial publication, including science fiction, horror and suspense, and various themed anthologies. For a concise bibliography you can visit the story's ISFdb page. "It's a Good Life" is available online at the now defunct Weird Fiction Review.
For this week's Short Story Wednesdays, please visit Patti Abbott's blog.
Posted by Casual Debris at 10:58 PM

I am leery of horror stories but this one does sound very well done. I will see if I can find an anthology that includes it.

I highly recommend. I've added a link to an online version at the end of my article: https://weirdfictionreview.com/2012/10/creepy-classic-its-a-good-life/.

If you do get around to reading the story, I'd be curious to know what you think.

I read the STAR SCIENCE FICTION STORIES anthology way back in the 1960s. I remember enjoying the stories. I'll have to dig out my copy and reread it!

George Kelley was accidentally posting as his wife on occasion, late this year.

It was certainly one of the stories that jumped out at me when I was reading THE SF HALL OF FAME, though I might've read it first in a "Hitchcock"-branded volume, too. It's not actually sf by any reasonable standard, but it certainly is one of the stories that its author might be remembered for after all else falls away (and the atrocious film version of THE TWILIGHT ZONE, which uses a perverse reworking of the story as a framing device, is deservedly completely forgotten). Bixby did no little good work, however, editorial as well as authorial.