Keyes, Daniel. "Flowers for Algernon." The Magazine of Fantasy and Science Fiction, April 1959.
This article is part of my attempt to read the 155 stories currently (as of 1 November 2022) on the ISFdb's Top Short Fiction list. Please see the introduction and list of stories here. I am encouraging readers to rate the stories and books they have read on the ISFdb.
ISFdb Rating: 9.78/10
My Rating:     10/10
"Mr. Strauss says I shud rite down what I think and evrey thing that happins to me from now on." 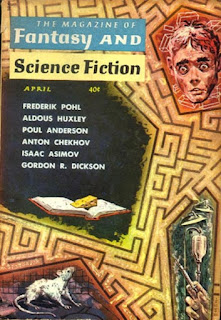 Charlie Gordon is a mentally disabled thirty-six year-old man who is given the opportunity to participate in an experimental medical treatment that promises to make him intelligent. The treatment was recently tested on a little white mouse named Algernon, whose intelligence has since greatly increased, as per some basic cognitive tests. In order to monitor his progress, Charlie has been asked to keep a kind of diary, a series of "Progress Reports." These progress reports make up the novelette that is "Flowers for Algernon," and it is through his writing, and his constant evolving self, that we discover his character and those who populate the world around him. Among the many strengths of the story is not Charlie's evolution itself, and eventual devolution, but the criticism of society in the treatment of people who are different from the norm. Charlie's emotions are very real, as are the emotions experienced in reading this story.
A genuinely touching story of a man's desire to improve himself, and the transformation of his personality as he becomes "improved." Written with great sensitivity, humour and pathos, the story becomes tragic as we care for the characters who find themselves in such an unusual situation. Including that mouse. The sensitivity comes directly from the author, as Keyes developed the story over many years, basing its main points on experiences he gained while teaching special needs children. The story transcends its genre, since the only speculative element is the operation, which is primarily a device to allow its protagonist to see the world around him from two distinctly different points of view. Stripped of this element, we are left with character, which is truly the driving force behind the story, and their experiences are what makes the story so powerful. Remove character and we have a generic plot device. The only other portion of the story that focuses on the operation is a brief moment when a former colleague of Charlie's comments that the change in him is "not right," though these views may have been expanded in Keyes's novel version. (I read the novel too long ago to recollect its details; when I find the time to re-read I will update this last sentence.) As for the scientific method, a good deal here is outdated, as intelligence is defined by one's IQ and success is some specific tests (primarily mazes and the Rorschach test), though the increase in intelligence, as we better understand its meaning, is evidenced in Charlie's evolution.
I read the story this time from an e-copy of the original Magazine of Fantasy and Science Fiction issue in which it first appeared (April 1959, with cover art for the story by Ed Emshwiller). I read it a few months ago in the anthology Suspense Stories (Mary E. McEwan, ed. Scholastic, 1963), and noticed that some of the spelling errors differed between the two versions of the text. Likely Keyes made revisions throughout the years, particularly as the story took on different forms as a novelette (1959) and novel (1966), with several reprints in between. I first read the story in high school from the anthology Ten Top Stories (David A. Sohn, ed., Bantam, 1964). 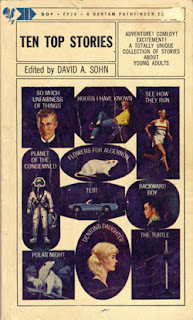 "Flowers for Algernon" has been read by many, as it is a staple of speculative fiction, and has for many years been required reading in North American high schools, including my own. Apparently banned from time to time, it has persevered, being made the subject of various adaptations, including an Academy Award-winning film, Charly (1968; which I have not yet seen). It is among the few short stories that has such cultural significance that it can be mentioned/alluded to, and most people would have at least an inkling of an idea of what is being referenced.
You can visit this ISFdb page to view its incredibly broad publication history.
Posted by Casual Debris at 1:44 PM

CHARLY is slightly disappointing as a film, but worth seeing...I've never read the novel form of FLOWERS, but suspect Scholastic copy-editors might've been more responsible for variant misspellings than Keyes himself. Interesting that you also had a TEN TOP STORIES handy in your youth...certain anthologies were almost ineluctable for people of our age.

Another work, like Bixby's "It's a Good Life--", that tends to overshadow other work by its author, even such decent work (in the field) as "Crazy Maro".